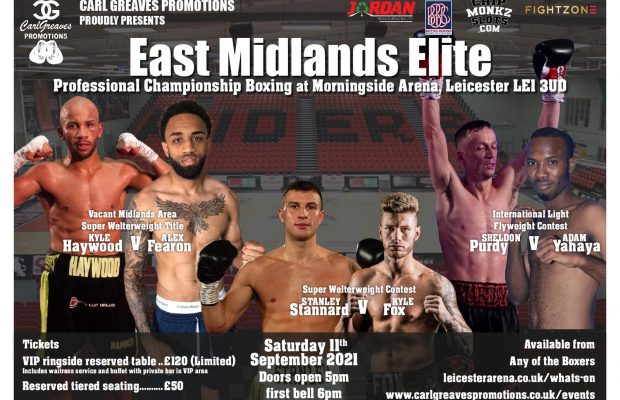 Carl Greaves has hailed the impact of Fightzone on British boxing, ahead of his September 11 show at Leicester Arena being broadcast live on the exciting new fight channel.

Greaves is a mainstay on the UK boxing scene, juggling his time between managing, training and promoting fighters. The former top super featherweight – who won the WBF ‘World’ Title in 2003 – knows all there is to know about the fight game and says the launch of Fightzone has breathed new life into the sport in Britain.

“I’ve been very impressed and I paid a year’s subscription straight away! I’ve watched the cards and am lucky enough to have had kids on some of the shows; Levi Giles and Stanley Stannard.

“The Fightzone setup is absolutely fantastic. There’s been a lot of time and money put into it by Dennis [Hobson] and the other partners, and I hope boxing fans continue to get behind it and support it. It’s great for someone like myself who hasn’t got a TV deal, it’s the closest I’m going to get.

“It’s just a brilliant platform for my fighters, and up and coming kids, and I can’t thank Fightzone enough for giving me the opportunity to build my kids up on the channel.”

Greaves’ Leicester Arena show is another great British ‘small hall’ boxing card, topped by a evenly-matched title fight that is too hard to call. The vacant Midlands Area Super Welterweight Title will be up for grabs in the headliner, with Leicester’s Kyle Haywood and Derby’s Alex Fearon going head to head in a real ‘pick ’em’ affair.

Haywood is hoping it will be second time lucky against Fearon, after coming up a little short in his first attempt to win the belt in March 2019. That night, Kyle went the 10-round distance but was on the wrong end of a 95-97 decision to local rival CJ Challenger – his only defeat in nine fights.

Slightly more experienced, Fearon has lost just twice in 11 fights, both times in Midlands Area Title contests. In his last fight (September 2020), the 27-year-old was beaten over 10 rounds for the Super Lightweight championship against Ben Fields, and in 2018 was stopped in seven by highly-thought of Kaisee Benjamin in an attempt at the welterweight crown.

Ahead of the show, Greaves is predicting great entertainment for Fightzone viewers and believes his charge, Kyle Haywood, will come out on top in a fan-friendly battle.

“It’s southpaw versus southpaw and it’s a really good fight,” said Carl. “Alex has boxed at championship level a couple of times before, and Kyle has boxed for the Midlands Area Title before, so it’s a good fight. They’re of similar experience and ability, it’s a real 50-50 and just what you need on these sort of shows. I can’t really pick a winner.

“I’m quietly confident though that we’ll get the win. Kyle gets good southpaw sparring in the gym with Stanley Stannard and he’s looking really good, but it isn’t an easy fight. Kyle was very down after losing to CJ Challenger, which was a very close fight. He’s learned a lot from it though, has had a bit of time out and will be coming back stronger.

“We’ve also got Tom Cowling who’s 4-0 fighting the former bare knuckle boxer, Seamus Devlin – this is a good fight, Seamus will come and give it a real go. And Benn Norman, 3-0, is taking on Reiss Taylor – so that’s a dangerous fight.

“They’re all good, competitive top fights. It’s a really lively undercard and a decent bill from top to bottom.”

Visit www.fightzone.uk and join the revolution use code BBTV