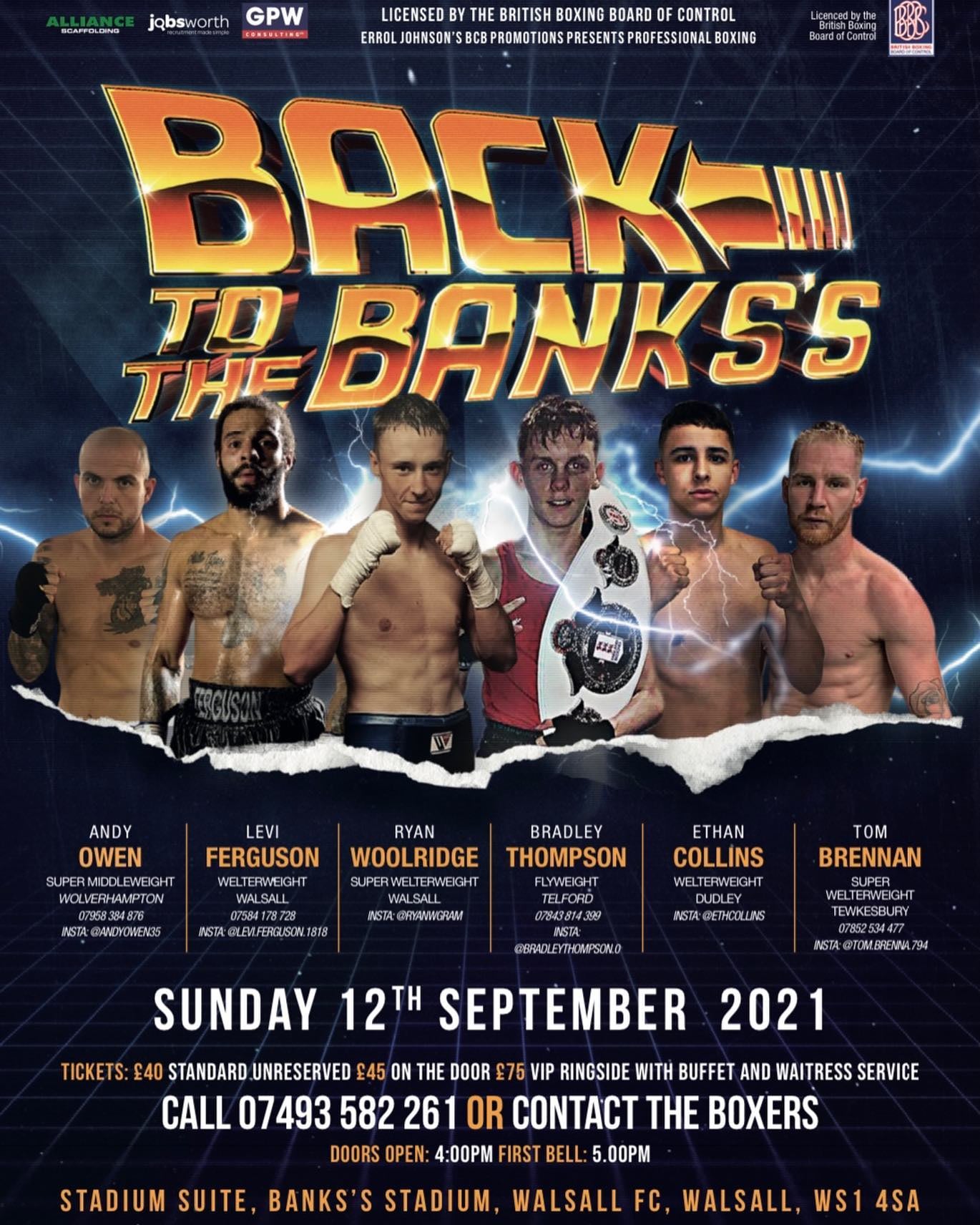 Tom Brennan has set his sights on the “complete performance” after making major changes in the run-up to fight night. He will be focussed on putting that plan into action when pro boxing returns to the Stadium Suite at Walsall FC’s the Banks’s Stadium, on the Sunday afternoon of September 12.

Brennan has three pro bouts of experience in the super welterweight division and will want to level up a record that contains a win and two defeats. The 26-year-old started in 2019 with an over-the-distance win against the heavier Mac Pemhiwa, seeing him off by a point for a 39-38 points verdict. Travelling to Scotland and stepping up to six rounds, in 2020, came next for Brennan, going toe-to-toe with Scottish area champion Paul Kean.

Brennan was widely outpointed but buoyed to see the finish, even if the result was scored 60-55 to Kean, who went on to challenge for the WBO European title. Later that year, the Channel 5 cameras were rolling when he took on Michael Hennessy Jr, son of promoter Mick, in another six-rounder.Brennan pushed Hennessy to the limit and felt aggrieved when his opponent toppled over, referee Phil Edwards ruling the tumble as a slip.

The potential point off not happening to Hennessy proved telling, as Brennan ended up on the losing side after another close call, which was 39-38 against him. That leaves work to be done to get his pro career back on track, which comes after spells as an unlicensed fighter and amateur with Treadworth Boxing Club. Brennan lives and breathes the sport, as the owner of the Barn Boxing & Fitness gym in Clanfield, Oxfordshire, which is now becoming an amateur club in its own right.

He said: “Of course, I live in the gym, because I run one as my business! The name certainly gives the place away, as it’s a converted barn.“We do boxing-based fitness and teach people how to box, which has led to us becoming a proper boxing club. If I’m honest, I most enjoy working with the boxers.

“We take in anyone from the age of seven to 33 for boxing, which is the cut-off point for being registered as an amateur, although you can box up to 39.“The head coach (John Healey) is the father of my fiance (Harriet Healey). I met her through buying the gym out in 2019. She’s had an amateur career and is now coaching, as well.“Boxing is life, for us, but I didn’t start until the age of 21. Me and a friend of mine (Arron Mullis) signed up for a white collar (unlicensed) for a bit of fun, at first. I beat him on points!

“I had a few more white collar bouts, then decided to go amateur and take boxing more seriously. That eventually led to me turning pro. “I’m here, there and everywhere. I’m at the gym, I train in Gloucester and I live in Dumbleton (Worcestershire). I spend a lot of time on the road!“I have learned some harsh lessons, along the way, that you can’t play at boxing and I’m serious about everything that I do.

”Brennan believes significant improvements have been made under new coach Ameen Khan. The two have been working hard at the Truth Boxing Club (MTK Gloucestershire).He said: “So far, I’ve either boxed well and lost or not boxed well and won, so this is my opportunity to showcase what I can do.

“My debut was against a great lump of a lad, I wanted the stoppage and I just couldn’t get him out of there. I could have done better. “As strange as it sounds, I consider my first pro defeat as the start of a promising career. To hold my own like that, against such a good opponent, gave me a lot of confidence.

“I showed that I can compete, at a good level, and that’s when I fell back in love with boxing again. To then box on TV, against Michael Hennessy, was another great experience. “I still believe I didn’t lose that fight (against Hennessy). There was a knockdown ruled a slip and I can’t see how, seeing as he fell backwards. It was a hard night’s work for him.

“I’m still finding myself, really, as a pro boxer, but I’ve set myself the goal that I want to win a Midlands title. That would mean something to me.”There are a host of local boxers among the other four of the five who will appear in the home corner at the Stadium Suite that day. Bradley Thompson’s amateur exploits precede him, as a three-time national titleist who boxed for England, winning a silver medal at the 2017 Junior Three Nations tournament.

He claimed England Junior titles in two consecutive years and added England Youth honours, finishing on 81 amateur contests with 66 victories for Donnington Boxing Club.  Andy Owen is equally up and running after his pro introduction at light heavyweight in June, getting Richie Carter’s Pro Boxing Stable going with his performance. Wolverhampton’s Owen, who lives in Perton, had Carter leading him into battle for a stoppage of his own, with opponent Ryan Hibbert retiring after the second round.

Ryan Woolridge will become the first graduate from Great Wyrley Boxing Club to turn pro, joining the super welter division. Woolridge, nicknamed ‘Rhino,’ is from Walsall. Ethan Collins is another boxer on a maiden voyage into the pro code, entering at welter, and will be making the short trip to the Stadium Suite from Dudley. Collins has a good grounding, having been trained by former professional boxing champion Darren McDermott as an amateur.

Tickets for the Stadium Suite bill are on sale, priced at £40 standard or £75 VIP ringside with buffet, and can be purchased by calling the boxer or online