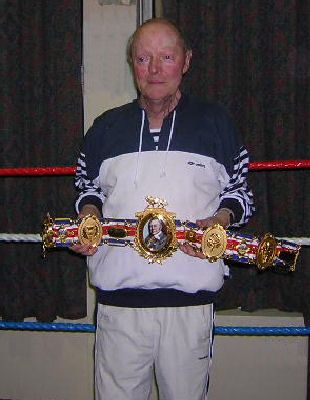 The Late great Jimmy Egan started his first gym in 1980. His first club was based at the Wythenshawe Forum in Civic, the centre of Wythenshawe, one of the biggest and poorest council estates in the UK.
Since then, 30 years on this year 2010, the club has been involved in a constant battle, waged in order to make people understand what “Our” gym stands for says Steve Egan, Jimmy’s son and the current head coach at the club.
Its not just Boxing, its about manners, forging new friendships, getting out and about and above all enjoying life. These are the qualities we aspire to develop in the youth of Wythenshawe.
When we had to move from the Forum there was nowhere to go in Wythenshawe, at that time my dad received a phone call from a sports centre manager in Salford, he said he had heard about the great work Jimmy was doing and that we had no gym.
He offered us a place in Ordsall, Salford. We were there for a couple of years, then had the chance to return to Wythenshawe. We started again in Sharston baths, after a couple of years we were told we had to move again, since then its been the same thing.
We moved to the Benchill, to Ringway Infants School, now we are at Crossacres Infants school and we will soon move to the New Life Centre in Woodhouse Park.

Since then it has turned into a hub for the community, despite near-constant adversity, including no fewer than six names and 13 premises, taking in Odsall, Sharston and Benchill along the way.

Sadly Egan didn’t live to witness this milestone, dying of cancer in 2004, but his passion for the sport and the people he served never waned – even turning up to training a week before he passed away.

Now Steve has carried on his father’s good work and is determined to see the club prosper for another 30 years and beyond. speaking recently to the Manchester Evening News Steve said:

“I promised my dad I’d look after the gym and since he died we’ve had 17 national champions,” said the 47-year-old. “He would be dancing on the clouds about that – and it could have been more.”

Steve has been as good as his word in dedicating his life to the gym – by day working as a builder and decorator, by night training his latest batch of hopefuls.

But his obsession is understandable, as it was his own interest in boxing that led his father to open a gym in the first place.

“A lot of people think it was him who got me into boxing, but it was the other way round,” he said. “It was me who rekindled his love for it.

“I was boxing in Cavendish and he wasn’t happy with what was going on with my training and thought he could do better. He wanted to open a gym and thought Wythenshawe was a big estate, full of good people and he’d be able to find a champion.

“I thought he should have got an OBE for what he did for the community.”

Steve refers to the countless young lives that he and his father before him have changed, wherever the gym has been situated, instilling discipline and self-respect to those who might so easily have gone off the rails or already had.

For all the amateur champions the Egans have produced – Tyson Fury the most celebrated – Steve insists it is not about titles, rather improving people.

“It’s about getting kids off the streets and teaching them discipline,” he said. “We don’t make money – we charge £2 subs – we’ve got no sponsors, we’re not in it to make money.

“I’m like my dad – I love the lads. I love turning kids into nice lads. And I love taking kids who are scared of their shadow and turning them into national champions.

“But for me there is more pleasure in taking a kid who might be a bit rough around the edges and teaching him respect and improving him as a person. Titles might get your club notoriety, but it’s much nicer to know you’ve put someone on the straight and narrow. You’re making the world a better place.

“I love it when someone comes up to me and says, `Your dad changed my life.’ I’d like them to say the same about me in 40 years’ time.

“I think the club is one of the most important things in Wythenshawe. It teaches people things that other activities just can’t.”

Right now Egan’s is fulfilling both of Steve’s dreams – winning titles and helping young people in the process.

That it has managed to do so with so little funding and despite a turbulent past in which it was constantly forced to uproot, is even more impressive. Steve has been a fundamental part of that, training for 29 years, but he puts its very existence down to his father’s determination.

He said: “We’ve been shut down so many times. Every couple of years we were forced to move on. It was a case of starting from scratch every time. How my dad managed to carry on, I don’t know. His determination was amazing.

“Even when he was ill, having chemotherapy, he’d come home and just lie on the floor because it would take everything out of him. But he’d still go down to the gym. He was down there the week before he died.”

Egan’s may have endured an uncertain past, but the future should be less turbulent.

Now based at Royalthorn Road in Wythenshawe, they have a 99-year lease and hope to expand the premises to include services for the wider community, including the elderly.

That might seem a world away from the blood and guts of boxing, but it fits in perfectly with Egan’s ethos. It’s not all about the sport – rather the community.

“Jimmy Egan’s Boxing Academy does a lot of good work with young people in Benchill, helping to teach them not only how to stay fit and healthy but also the importance of manners, forging new friendships, getting out and about and above all enjoying life positively. These are all qualities which are important for young people in Wythenshawe. “ Local MP  Mr Paul Goggins.