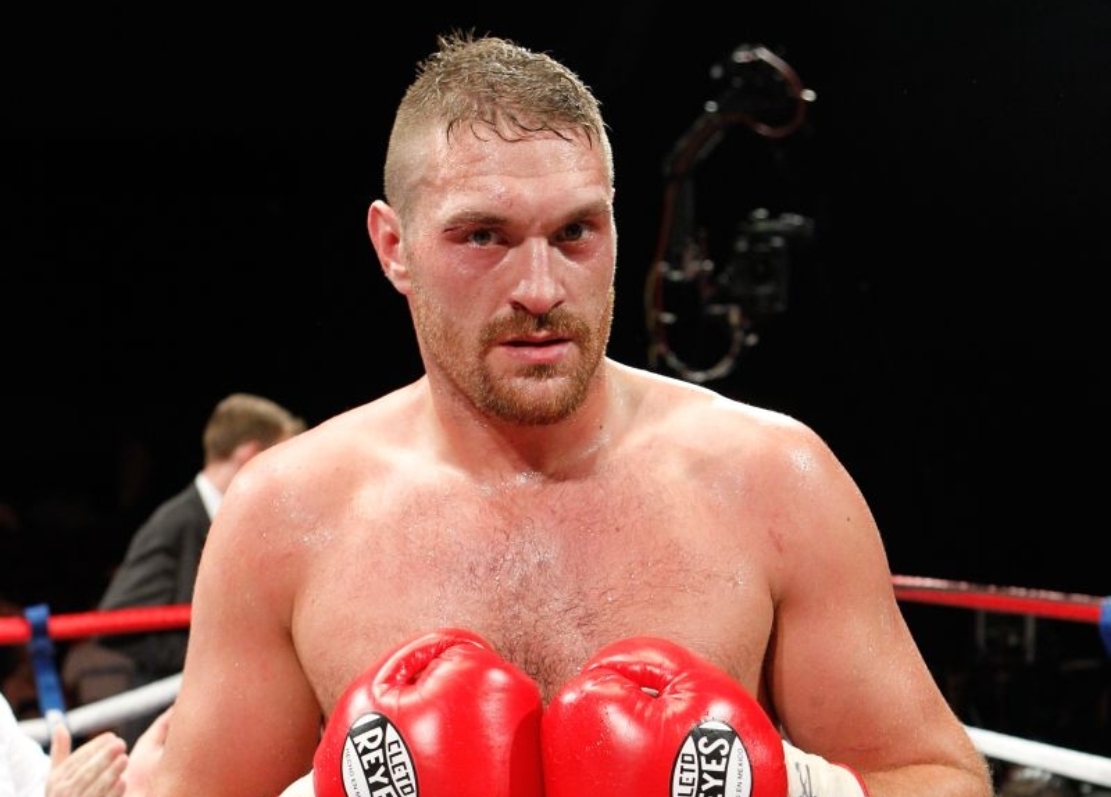 I first met Tyson Fury at Jimmy Egan’s Boxing Academy in Wythenshawe, Manchester. Then and still the gym is run by Steve and Shaun Egan, sons of the late Jimmy, who taught me to box as a youngster.

Then it was the Benchill Boxing Club in the old Sharston swimming baths and then above the Benchill pub, many moons ago. A great man was Jimmy an old school dedicated coach and his two sons have taken on his role after the eld fella passed away in 2004 after a battle with cancer.
[sam id=”1″ codes=”true”]
Shaun and Steve have since produced a succession of amateur champions in their own right, but Jimmy’s name will always ring out within the new gym on the other side of the south Manchester council estate. In 2006 I’d started training for a fight and asked Steve if I could come and use the gym to get in shape. At the time they were using a school hall to train and Steve pointed to a couple of lads in the corner who were taping up their hands.
‘Guess how old he is’? Steve asked me, pointing out Tyson. I couldn’t tell but it had to be 25 plus? ‘Seventeen’ laughed Steve. ‘And his brother Shane is 15.’ he added. Shane was the lad stood with him, who was a big fellow in his own right and both looked much older than their teenage years suggested.

Steve went on, ‘Tyson Fury is his name’ and he will be heavyweight champion of the world one day!’ – I believed him. I shook Tyson and Shane’s hand’s and over the next few years on and off I trained quietly beside them and the other lads at the gym.
I watched Tyson spar with his brother many times and the pair never let sibling love get in the way and on occasions had some very competitive sessions! – Even then there was something about Tyson, a sparkling energy.
Tyson’s dad and former professional fighter Gypsy John Fury would sometimes come and train at the gym and hit the bags. John was someone I had bought a couple of vans off a few years earlier and it was when I put two and two together that I remember seeing John’s young kids riding Quad bikes in the field surrounding his house, when I went to pick up a van one time. That would have been the young Tyson. Since then the name stuck and I have followed his boxing with Steve’s prophecy in my mind.
Over them couple of years I went to the local community centres and the Civic Forum watching Tyson’s last half dozen amateur fights, including his loss to David Price. He then went to London to claim the ABA title just before turning professional. Below is a video of Tyson made by local journalist around this time.
Tyson eventually turned professional in December 2008 and with it left Steve and Shaun and Jimmy Egan’s Boxing Academy to train with his uncle Hughie, as well as former fighter Robert McCracken in Birmingham. Tyson then left McCracken and went back to train with Steve for his first fight with John McDermot, but after that close fight, they went their separate ways again.
Since then Fury has gone through a succession of trainers including his Dad, Brian Hughes and Pat Barrett. He also made his own way to America to track down Emanuel Steward to train with the legendary coach. In between all this uncle Hughie has been there to train him in between. During this period under the different trainers, over three years, Fury managed to win the English, British and Commonwealth heavyweight titles and remain unbeaten in 17 professional fights. His trainer for the Pajkec fight at the end of last year was Canadian Chris Johnson who used to coach Steve Molitor.

Before the fight Fury had split with uncle Hughie, sighting family fall outs for the parting of ways. Fury had been residing in a caravan at Hughie’s house and behind the gym where he trained with his uncle in Lancaster. Since the split Fury as moved to Morcombe Bay. He ran on the beach in his new home seafront town in preparation for the first defence of his Commonwealth belt. But it seemed that all wasn’t right before the Pajkec fight and it shown in Fury’s condition and performance.

Fury now 23, didn’t enter that fight in full fighting shape, he wasn’t primed and he wasn’t sharp. He didn’t look in the zone until the 3rd round and then it was a semi controlled aggression, with no tactical thought. He pounded and bullied Pajkic with his size power and force. It wasn’t pretty and he could have made lighter work of him and other opponents like this in the future, if he were to use his given talents and strengths to there maximum.

In the fight, Fury was drawn in to a brawl, forgetting and neglecting his better ring credentials. Before and during the fight, the Manchester heavyweight also shown his vulnerabilities. All fighters have them and have to work tirelessly to correct and conquer them in and out of the ring. Fury had spoke prior to the fight about his mental demons, angry tendencies and insecurities. In the fight he mirrored these in his physical output and didn’t look like a boxer in control, almost like he didn’t want to be in there.
The Fury knockdown in round two against Pajkec will be shown endlessly now before every fight he has here after. A big question mark will hang over him and every pre-fight analysis will be filled with clips of him sprawled out on the canvas. His future opponents will be inspired knowing he can be hurt and put down and will look to get Fury to trade with them, thus taking away his main assets and tools.
Fury needs to firstly knock himself in tip top shape until it hurts, like never before he needs to take his body into the realms of a supreme fighting athlete, if he is serious about reaching the very top and staying there. A permanent trainer who he believes in trusts and respects is essential in his development from here on in.
[sam id=”1″ codes=”true”]
Tyson and his wife Paris now have two young children and it is a time of his life now where he should be settled, focused and making great strides in his chosen career. But in February this year his dad John was sentenced to 11 years in prison and it is a situation that is still raw for Tyson and weighing heavy on his mind. His dad had travelled the world with him as an amateur and pro to every fight and was his chief cheer leader, his rock and his security, the person he trusted, who was always there for him and now he wasn’t! Gypsy John once even drove to Siberia and Poland to see him box as an amateur because he didn’t want to fly.
Tyson has stated his regret and sadness that his dad may never see him fight live again during his career and the recent rumblings in the close knit Fury family and the absence of uncle Hughie, seemed to have affected his recent performances. Against Chisora he shown glimpses of how effective he can be when he gets on his toes and uses his jab and movement. Although he cannot seem to help getting involved in a war and I guess that’s just in his make-up and what makes him exciting to watch. Tyson’s heart and bravery are certainly not in question. – But if he is to reach and fight for a world title and become the world champion Steve Egan told me he would be years back, he must live the life and find a peace of mind and strength to be the best he can be on every occasion in the gym and in the ring on fight night.
The British heavyweight champion is certainly active and promoter Mick Hennessey isn’t holding him back. The Fury show is still on course and it will always be interesting while it continues. – Long may it.
[sam id=”1″ codes=”true”]