British BoxersJuly 7, 2009
LATEST BOXING NEWS0 Comments7 min read
The Phil Gill “Experience” Now there’s a catchy name, the ring name at the end, rather than in the middle. The name suggests we are going on a magical mystery tour of intrigue? A Big top extravaganza not to be missed. 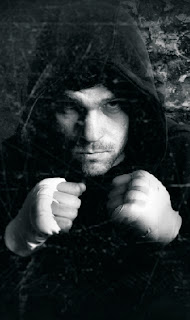 So when Hertfordshire Welterweight The Phil Gill “Experience” says “My style will bring edge of the seat non stop action NOT TO BE MISSED!! I’m going to smash my way to the top and I’m going to take you guys with me!!” – Then maybe this isn’t a show to be missed.

So Phil Whats with the Name?
“Ha ha the name, I knew this would bite me in the arse one day.”It was something we decided on a trip to Manchester to see Kerry Kayes (CNP) On the long drive back about, 3 weeks before my debut I was with Paul Rees (head trainer) Ashley Sexton and Andy Smith (assistant trainer) I was messing about and I said, Look, FLASH Ash, has got a nick name, do I need one? Well I think I need one so this went on for a the next few hours. Until Paul said, “The Experience” Because everything you go near ends up on its back, and gets the “Experience” So the gist of it is, with me you will always get an “Experience” to remember one way or another”
How did you find the switch from amateur to pro?
“My debut was the toughest challenge i have faced in my boxing career to date”. “I had made the choice to turn pro on the back of some disappointing results as an amateur, narrowly losing bouts” I felt I could not develop my come forward style, due to the protection given to boxers by the refs in the amateurs, rough style fighters were always up against it! I was lacking in confidence at the time, deep down i knew i had the ability to progress as a pro, but i had lost my last 6 amateur bouts” I was thinking, am i good enough?, am i really cut out for this? but my manager, trainer and Ashley Sexton, could see that i had what i takes, and gave me that belief” “So i put a great deal of pressure on my self i told my self if i lose I’m never boxing again! “So i was already battling in my mind before i got into the ring! But once i got in the ring and heard my roaring fans i knew this was where i was meant to be. I felt i could have stopped him (Johnny Greaves) early in the fight. there was a knock down, that wasn’t counted, and points where i thought the ref could of waved it off. But i was taking silly shots and giving Greaves inspiration and that’s what id say kept him in the fight.”
You seemed to look more relaxed and performed better in your next fight against Craig Dyer, were you better prepared mentally?
Against Dyer i went in full of confidence, the pressure i was putting on myself had gone. I was maybe over eager to please in this fight. I walked in with my hands down right onto a massive haymaker from Dyer, and I was put over. then I dropped Dyer, after a scrappy 1st and 2nd i started to settle into pro boxing, and i was feeling at home. The 3rd and 4th rounds, i was firmly in charge and looking for the stoppage. It was one punch away. but the punch never came. And i had to settle for a points win.
You mentioned the amateurs didn’t suite your boxing style, how about the length and amount of rounds in the pros, have you changed your training to suit the paid ranks?
“I’m a fit lad, i have a good engine and once i step up to 6 rounds, i know the stoppages will come, i have the power and with the added distance and my massive work rate, these guys wont wanna go 6 with me. I am learning fast, and ticking all the boxes of what it takes to be a pro. Yes i got put down, but now i no i can get up and win. I was also cut against Dyer, but i did not let it affect my boxing, how many time have you seen someone fall to peaces when they get a cut? For me this fight was much easier than my debut, despite the obvious early set back. Once i settled into the fight, we were getting glimpses of what was to come, what i could do, what i had learned. By the end of that fight i was a different fighter from the one that turned pro 4 months earlier.”
How did you start boxing? 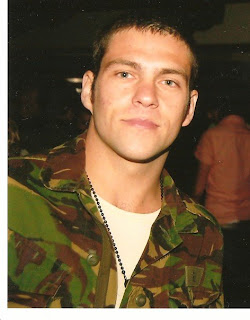 “I joined the army in 1999 and served in Kosovo, Afghanistan and Canada.I had my first amateur fight in the army, and it was all about pride against another regiment. The bout lasted less than a minute, I stopped him and that was when i knew boxing was what i wanted to do”

Did you have many bouts in the army and as an amateur?
“I had another 5 Amateur bouts that year 2001, but i was unable to compete again until late 2004 where again i had great success and stopped my opponent in the second round. my boxing career then progressed so fast that within 3 years i was competing at top domestic level. I reached the semi finals of the Counties Championships twice in 2006, 2007, and got to the quarters in 2008. I also won The Haringey Boxcup Silver medal. All together i had 42 Amateur Bouts, one was against the Anthony Ogogo from Big Brother”
What are the plans for your career?
“My plans are to hopefully find a sponsor, so i can give up work. Training twice a day, and having a full time job gets too much at times. My goal is to be the southern area champ within the next year. The longer fights are going to suit me, the sooner i can step up the better”
Any potential fights lined up?
“Nothing lined up at the moment, but should be back out in September” Who would you like to fight? “Well i recently called out Graham Earl. He has just made his comeback at light welter. But a few fights down the line my first target would me the southern area champ Peter Macdoungh. Once i have settled into the pro,s ” Which fighter do you aspire to? “Ricky Hatton, for his style, he always put on a performance to remember. Id like to think my fights are the same.”
How far do you think you can go in the Pro ranks?
“European level is my goal at the moment. I started late as a pro boxer, and with my style i will have a hard fast career,”
Well thank you for your time Phil, and good luck with your career!
“Thank you, it’s a pleasure” www.philgillexperience.com Visit The Phil Gill “Experience” for more information
interview by Chris Maylett www.britishboxers.co.uk