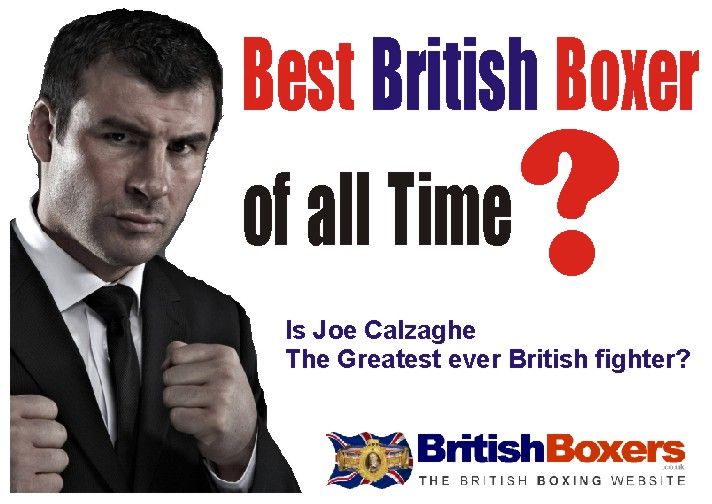 Best British Boxers Pound for Pound of All Time?

Who is the Greatest British Boxer Pound for Pound of all time?

Every 10 years or so there is always another boxer or three, pushing to break into the elite list of their predecessors.

There are many things to take into account when trying to choose just one, and as a boxing fan it is near impossible to single one out. Era’s and quality of opposition are a telling factor in any initial thought processes, swiftly followed by level the boxer campaigned at and ultimately world title achievements.

The whole debate of who was THE best of all time has been disgusted and argued about since the game began to form it’s history and eventually always seems to boil down to a matter of opinion and personal choice. Debates will continue to go on for many a year and will continue to do so while boxing exists.

The best fighters could depend and be judged on… for instance

And so on and so forth…..
Our Short List of Boxers to be considered
in no particular order are…

Have we missed your favourite? let us know your thoughts! Please post us your views below.

The video below features promoter Frank Warren, the late Harry Mullan (journalist) and former world cruiserweight champion Glen McCrory. The knowledgeable trio discuss who their choice of ‘Best British Boxer of all time is. The video was made a good few years ago and we should note that the likes of Joe Calzaghe, Ricky Hatton and indeed Lennox Lewis had not yet gone on to achieve what they did. But it is well worth a watch and raises many questions. The video also gives new fans of the sport an insight to the great boxers of yesteryear.

In a poll we recently ran, Joe Calzaghe won the votes for the best pound for pound boxer to come from these shores. Do you agree?

Or have we forgotten maybe just how good Ted “Kid” Lewis was? Bert Randolph Sugar, in his authoritative book, The 100 Greatest Boxers of All Time, ranked Lewis at number 33, ahead of such fighters as “Gentleman Jim” Corbett, Jake LaMotta, Sugar Ray Leonard, and Georges Carpentier.

During his career Ted “Kid” Lewis  won 9 titles at weights ranging from featherweight to middleweight. Lewis was born in London 24 Oct 1894 and was to start boxing professionally at the age of 14. – Mike Tyson the former undisputed heavyweight champion and renowned boxing historian, once said Ted “Kid Lewis” Lewis was “probably the greatest fighter to ever come out of Britain.”

‘The Kid’ was elected to the International Boxing Hall of Fame in 1992. He finished his career with a record of 283 fights, won 215 (71 KOs), lost 44, drew 24. He had regularly conceded significant weight to a great many of his opponents and also going into their back yards to do so.

But surely it’s got to be the other Lewis?

Lennox Lewis! He was our undisputed heavyweight champion, who cleaned up the heavyweight division and defeated every man he ever faced? In 2009, in his first year of eligibility, Lewis was inducted into the International Boxing Hall of Fame.

With a career record of 41 Wins (32 knockouts, 7 decisions, 2 disqualifications), 2 Losses (2 knockouts), 1 Draw, including wins over his other modern day great rivals Evander Holyfield and Mike Tyson. Lewis is up there with the best.

Wait did we forget that Lloyd Honeyghan was?

The Ragamuffin man defeated the American superstar and pound for pound No1 of the time, Donald Curry against all the odds in September 1996 at Ceasar’s Hotel & Casino, Atlantic City.

During his pro career Honeyghan had 43 fights, winning 30 by knockout and losing just  5  in an amazing career. Honeyghan campaigned at a time when there was a big pool of quality fighters of the day. Honeyghan won the WBC, WBA and IBF Welterweight titles during his career.

Here are three other fighters to consider when making your judgement on, just who is the greatest pound for pound boxer to come from the UK?

Joe Calzaghe, the Italian Dragon, the Welsh Wizard who finished his career in Halcyon days, defeating two of the all time greats in Bernard Hopkins and Roy Jones Jr. Them wins came on top of his master class showing, to beat ‘America’s Jeff Lacy, a fellow world champion unbeaten and at the time being branded the new Mike Tyson and the saviour of US boxing.

Calzaghe Retired with an incredible record of 46 fights, 46 wins, 32 by knockout. He fought and beat the best he had put in front of him in his era and deserves to be fought of in high esteem..

At the time of writing a new breed of contenders shake up the assembled lists of the past. Names such as David Haye, undisputed cruiserweight champion and heavyweight title holder who’s achievements stake a claim.

Carl Froch and Amir Khan are two other fighters on there way to being considered worthy of consideration, if they can continue to perform and fight the best out there and achieve all the ingredients it takes to be the best and be thought of as contenders, to the ones who have gone before them.

The best ever? – That’s your shout!

Tyson Fury the unbeaten heavyweight showman from Manchester becomes heavyweight champion of the world defeating the linear champion, unbeaten in 11 years, Wladimir Klitschko. Is Fury considering this achievement eligable for our list. Becoming heavyweight champion of the world automaticaly admits you to any list like this. If he can be regarded as the best ever, of course not, but his achiement is the best it gets. Can he reign supreme as champion for a longtime? Then maybe one day he will top the list!