Will the true Pound for Pound King please stand up

All boxing fans around the world will be watching this fight, as we did for the Ali, Frazier, Foreman fights and the legendary Leonard, Hagler, Hearns and Duran bouts, true boxing folklore, in the Halcyon Days of boxing, when there was a true champion, and real fights.

Fights like this one don’t come along often – when the two best pound for pound fighters in the world meet in there prime.

Mayweather was regarded as the pound for pound king of boxing and then retired after he defeated Ricky Hatton. His natural successor to his crown was number 2 rated Manny Pacquiao.

Manny is a remarkable fighter winning world titles from flyweight to Welterweight and also defeating Oscar De La Hoya at light middleweight for a version of the title.

In the Hatton fight, Manny shown he had lost no power in his moving through the weights, and again in the Cotto fight, he began to show how strong he is too, at times bulling Cotto and pushing him back, before stopping him in the last round.

Pacquiao is on top of his game, and seems content on proving he is the best fighter in the world, fighting all comers and ducking no one, in recent years in a 5o fight career. 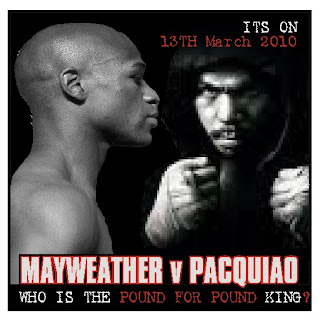 Then on 19th September 2009 this year, Mr ‘Money’ Mayweather, ‘the undefeated former pound for pound king’ ends his retirement against a common foe in Juan Manuel Marquez, the Mexican legend and former world champion.

Mayweather made a proud warrior in Marquez look ordinary! – and that’s being kind! Floyd had lost none of his skills and shown no signs of ring rust, in fact it looked like the break had done him the world of good.

Floyd was born in a boxing gym, probably learnt to crawl and walk on the blood stained canvas of the tough Las V that his renowned fighting family earned there dues in, if there is such thing as a perfect defensive fighter and all round ring craftsman? Floyd is it!

Mayweather has said – “I don’t want to just go down in the Hall of Fame with some saying I was one of the best, I want everyone to say ‘Floyd was the best’. well now he has the chance to do just that, this fight will put either man at the top of the pile, as the best fighter of his generation.

Speaking this week on HBO Tv show Joe Buck, the 32 year old Mayweather, who is unbeaten in 40 fights — said: “Pacquiao’s a good fighter but I’ve been around the sport a long time and I’ve dominated boxing for around 15 years now.

“Nobody has defeated me yet so we’ll have to see. – The thing is, I don’t want the fans to be really shocked by what will happen when we do happen to meet up because it’s not going to be anything new for them – he’s been knocked out before and he’s taken losses.

“I’ll be victorious, you can believe it.”

Although definitive plans for the mega-money contest are yet to be confirmed, a date of March 13 is widely rumored to be agreed.

Global pay-per-view sales should smash all records, surpassing the previous record which was Mayweather’s bout with Oscar De La Hoya in 2007.

This fight had to happen and as almost made itself, and as Pacquiao’s trainer Freddie Roach said: “This is a fight the whole world wants to see.”

Two NFL stadiums were reported to be bidding to host the fight. Cowboy Stadium in Texas, home of the Dallas Cowboys, and also the Superdome in New Orleans, and although both stadiums could accommodate up to 100,000 people, it looks like the MGM Grand in Las Vegas will be hosting the fight, the hotel casinos and the strip likes the big fights, and the big fighters like Las Vegas.

With a guaranteed $20 million each (about £12.3 million) for the fight, which is expected to be on March 13. This is before they start counting the pay-per-view cash, which could comfortably more than double each boxers earnings.

British Boxer Amir Khan who trains and spars with Pacquiao in Freddy Roaches Wild Card Gym in LA, will be one of the chief sparring partners for this fight also along with American Andre Berto.

Amir is also expected to make his American debut on the undercard, – see below.

We will be keeping you updated on the fight with the build up, opinions, videos and the latest news from inside the two camps.

And just for the record, I see a Mayweather victory, we love the Pacman but head ruling heart, it has to be Floyd, he simply has got the lot!

Each fighters legacy in the Hall of Fame is safe, but will this be a bridge too far for Pacquio? He has tasted defeat before and that seems like the only thing separating them. Mayweather is a master craftsmen, he is blessed and it seems he doesn’t know how to lose. points victory for Pretty Boy and his coverted place among the elite of the sport. By Chris Maylett