It was a landmark decision today for Women’s Boxing when it was accepted into the 2012 ;” >London Olympics A long overdue decision for women in the sport, who have fought so hard to be accepted into a traditionally male world. The announcement in Berlin by IOC President, Jacques Rogge means that boxing is no longer the only Olympic sport practiced solely by men, and is is truly a landmark decision for women’s boxing and for the thousands of women boxers who train hard and dedicate there lives to the sport as much as there male counterparts. They compete in national, and international competition, their dream of competing on the biggest stage of all can now become a reality. 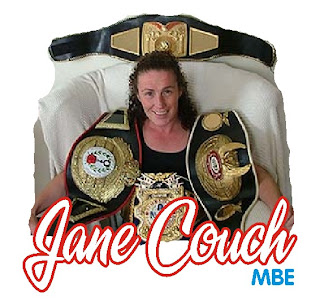 Jane Couch, MBE, the first woman in Britain to gain a professional license from the Boxing Board back in 1997, insisted on Thursday that the inclusion of women’s boxing in the Olympics was “justice and equality for a group of women wanting to compete in sport”.Jane as fought endlessly to be accepted in a male orientated sport. Jane who fought 42 times as a professional, 27 of those world title fights, the decision has come 15 years too late. Yet she is delighted for young female boxers. “I wasn’t even allowed in gyms when I started. I had to go virtually straight into the professional ranks as there was no amateur set-up. “This is definitely a day of justice for women’s boxing, and the IOC and Jacque Rogge are to be thanked, “It’s ten years too late but it’s great that it is here now.”

The inclusion of women in the Olympic Games has been a key goal for AIBA President, Ching–Kuo Wu ever since he was elected in 2006. Supported by the AIBA Women’s Commission, Dr Wu has worked tirelessly towards this momentous day.

“Women’s Olympic boxing is a vote for the future,” said Mr Wu. “AIBA accepted women’s boxing into its program as long ago as 1994 and I am thrilled and delighted that, at long last, women can claim their rightful place alongside men on the Olympic boxing program.”

Women will compete at three weights in London – flyweight (48 – 51kg), lightweight (56 – 60kg) and middleweight (69 – 75kg) – with 12 boxers taking part at each weight. In order for the total number of boxers to remain at 286 there will be one less weight category in the men’s competition, meaning that there will be 10 weights for men.

“The addition of women’s boxing means that we finally have a truly universal Olympic Games,” Mr Wu continued. “Nevertheless, we will strive to ensure a very successful first Olympic Games for women in London in order that the number of women participating at future Olympic Games may increase.”

Mr Rogge said: “I can only rejoice about the decision to include women’s boxing in the Olympic Games. (Women’s boxing) is a great addition since boxing was the only summer Olympic sport without a female discipline. Women’s boxing has progressed a lot in the last five years and it is time to include them.”

Obviously this will again raise the question is women’s boxing acceptable, should women be boxing? personally I wouldn’t stop anybody doing what they wanted to do, and if women want to box then all the good. If you don’t like women’s boxing then you don’t have to watch it, like MMA you either like it or you don’t. Boxing needs a boost and if women’s boxing is what it as took to get some needed coverage of boxing, then good on women’s boxing! and bring on the Olympics.

It is a view Barry McGuigan shares. He says: “We cannot be chauvinistic about it. If we are going to defend boxing as a sport, we must allow women to take part too.”

Amir Khan wasn’t as supporting to women’s boxing, when today he said “Women shouldn’t fight, women shouldn’t box, they should stick to other sports because boxing is a very, very tough sport, and you know, leave it to the men,” Erm could be a little naive on young Amir’s behalf, but he isn’twomen’s boxing. the only one with strong views against The BBBC originally said that women could not box because periods, pre-menstrual tension and the pill makes them too unstable.But today’s decision wipes out all past views by the board. There is now more support for women’s boxing than there as ever been, and now seems to be ready to go from strength to strength.

Richard Baker, of the International Boxing Association, said, “Thousands of females who practise religiously deserve the chance of being able to celebrate the worlds greatest sporting occasion.”

In England just 50 female boxers were registered in 2005. Now there are 642. London boxer Hannah Behanny age 22, is one of them, and is a double European bronze medalist. She said, “The guys in my gym treat me as an equal but there are still some people stuck in the old school who think that it shouldn’t happen. “It’s ignorance. Men get bashed up and bloodied. Women’s
boxing is more strategic. Ive never seen a girl get knocked out.”

So is women boxing any more dangerous or wrong than men boxing?. In a report printed in www.gardian.co.uk Dr Mike Loosemore Great Britain’s boxing team doctor and member of the BOA Medical Committe says “It is utter nonsense to suggest that women’s boxing is more dangerous than men’s. There is no medical argument that women shouldn’t be boxing.

From a medical point of view, there are no greater risks for women than men in amateur boxing. Obviously, if you box while you are more than three months pregnant there would be a risk to the foetus, as there would be if you played rugby or another contact sport.

There are also huge differences between amateur and professional boxing. Amateur boxing has been shown to be very safe compared with other contact sports. It has got the same head injury risk as ice skating.

Amateur boxing is about scoring points, it’s not about knocking people out. I also look after fencing and in that sport you’re not trying to run someone through with a sword. You have got one and you’re performing the motion, but what you’re trying to do is score points from your opponent. It is the same in amateur boxing.

Is women’s boxing for you, should women box? Let us know what you think? By Chris Maylett