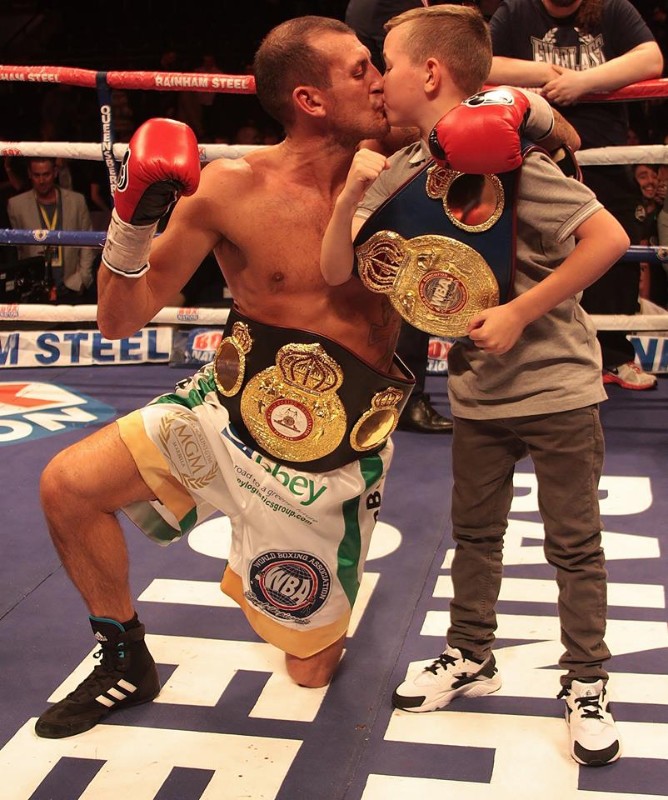 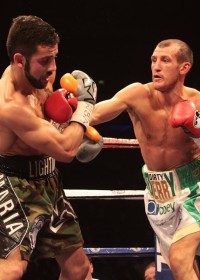 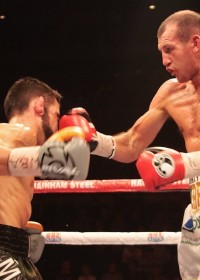 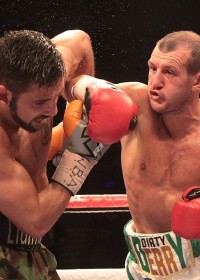 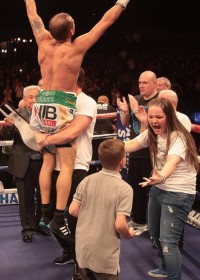 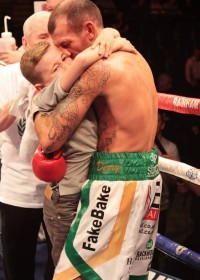 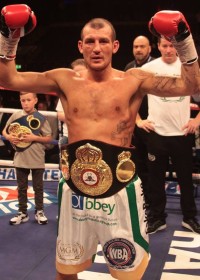 On Saturday night in Liverpool at the Echo Arena, Britain’s Derry Mathews headlined Frank Warren’s televised show against last minute replacement Tony Luis in a lightweight contest for the interim WBA 135lb strap that was screened live on Boxnation in the UK.

After originally being scheduled to box Cuban Richar Abril in place of original challenger Anthony Crolla, Mathews and promoter Frank Warren have had a nightmare week getting a fight on after Abril pulled out of the contest for a SECOND time a week ago (the first in March) and late replacement Ismael Barroso of Venezuela suffered visa problems that meant he too had to withdraw. With just a few days notice, Luis, who was scheduled to box in Canada last night anyway, answered the call of duty and flew in to seize his opportunity for the WBA interim, and was made favourite with the bookies. In the end those in attendance witnessed a really good, close fight that could have gone either way.

Prior to that contest, the best of the televised card saw undefeated middleweight prospect Joe Selkirk, (13-0, 7kos) return to action after a 16 month lay-off against Spain’s Yuri Pompillo. (7-10-2, 2ko).

Sadly for the nearly 30 year old Selkirk, who has endured 3 operations on an injured right hand, he had to box with just his left in this fight, a reluctance to throw the right obvious from the get-go. Luckily for Selkirk, the quality was there and despite the game Pompillo trying to make a fight of it, he tasted canvas in the third round and was stopped in the 6th after a barrage of left hands on the ropes from Selkirk ensured the referee had seen enough. It emerged later in the broadcast that Selkirk HAD broken a bone in his hand, thus confirming what we all knew. There really was a problem and after 3 operations already it’s bad news for the Liverpool man who was due to be fighting again in early July.

Next up on the televised show was undefeated local 147lb prospect Steven Lewis (9 -0 ,4ko ) who squared off over 6×3’s against London man Reece Smith.(2-1) It was a quick and flawless victory for Liverpool’s Lewis who looked classy against the Londoner, stopping him in the very first round. He last boxed just six weeks ago on the Butler-Tete card in the same venue, and scored an early KO that time out in the 2nd round. He was incredibly impressive tonight against an opponent who was completely outclassed and the call to move him up to area title level needs now to be answered. All in all he had Smith down three times inside the round in a confident and assured performance.

A great showing by 154lb contender Liam “Beefy” Smith acted as chief support to the Mathews fight, and the local lad, a member of the famous Smith family of fighters, remained undefeated with a dominant performance over Argentina’s David Romero (11-6, 5ko), improving to (20-0-1, 10ko)

Romero started brightly but was floored 4 times on the way to Smith securing a 7th round stoppage. A killer body shot had the tough South American down in the third and it was a familiar pattern, as Smith’s work up close in particular was telling. A low blow in the same round gave Romero a much needed rest yet already Smith was looking the stronger and the bossier of the two men. Two more knockdowns in the 5th nearly ended the contest and the Argentine’s corner were ready to throw in the towel, though the tough Romero, refusing to quit, was saved by the bell.

He hit the deck again in the 6th and once again the towel was ready to come in from the corner, but the factory worker from Bueno Aires would not roll over, and it was only in the seventh, when referee Steve Gray had seen enough, that the contest was waved off.

Smith is now in prime position to move up and fancies a crack at IBF champion Cornelius Bundrage, who at 41 years old is far and away the most beatable of all the champions at 154lb. The future is bright for the young Liverpudlian.

The headlining fight with Mathews and Luis was something of a treat. Mathews always comes to fight, but the UD victory that was awarded to Dirty Derry was a little unfair in the opinion of this writer, who gave the contest to Luis by scores of 114-112.

Both men boxed an opponent who they were not expecting to face and the crowd in attendance saw a game, tough Canadian turn up and give Mathews all sorts of trouble on route to dropping the decision.

A good opener that was hard to score was nicked by Luis for me but the commentators on screen begged to differ. It was clear that the warnings of Luis being a bit dirty were there to be heeded as he was warned repeatedly for infringements, particularly with the head. However BOTH fighters would lose a point in the 8th round after a series of warnings from ref Howard Foster, following a series of close rounds that were hard to score. Some spectators would have fancied the busier, more “effective aggression” of Luis, although for much of the fight, the cleaner punching, particularly on the counter, came from Mathews.

It was a theme that continued for much of the fight, and from the 9th on, the action really heated up. It appeared however that Mathews was beginning to flag whilst the Canadian was still up on his toes bouncing around to claim an emphatic round. The tenth was a good, close round that continued the theme of to and fro that had dominated the fight and the scorecards of those watching and scoring on social media reflected that as the fight went out live.

The feeling going into the 12th and final round was that it was anybody’s fight, and after an all action round that led to a rapturous ovation from the crowd, the scores of 114-112 (twice) and 115-112 were enough to give the Englishman the decision and his first world title, albeit a lightly regarded version.

Next for Derry would ideally be a defence of his new belt against Anthony Crolla of Manchester, yet rival promotional interests will most probably prevent that fight from happening, especially as Mathews hasn’t won the full WBA strap he was originally scheduled to challenge for.

It would be unfair of me to criticise Derry too harshly as he has given us a lot of entertainment over the years and put in a great showing tonight, however, he simply ISN’T a world level 135lb fighter, and even domestically a guy like Kevin Mitchell (who fights for the WBC on May 30th and IS world level imo) would box his ears off and beat him comfortably.

However, who am I to taint Derry’s moment? His interim belt is a richly deserved accolade and hard fought for, yet if I’m honest, it’s a reflection of his level on the world scene. An accurate one. Despite that I wish Mathews all the best for the future and he headlined an entertaining and action filled card from the former “City of Culture”….

The card also saw victories for light middleweight Macauly McGowan, welterweight Josh Leather and super flyweight Andrew Cain on his professional debut. As an addendum to the headline fight, a live contest between super flyweights Iain Butcher and Brett Fidoe rounded off the show over 6×3’s.  Butcher won the fight by UD against Fidoe who took the fight on late notice.

Thanks for reading as always. ALL my articles, fighter interviews and features are on my twitter – @undilutedpoison