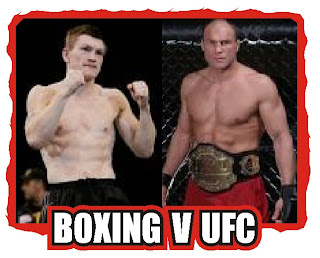 Ricky Hatton believes boxing fans have become disillusioned with the politics in the sport in recent years, fights called off, boxers avoiding each other and champions side stepping top contenders. This again was evident, when Ricky’s brother Mathew’s fight with former undisputed welterweight champion Zab Judah was called off for the second time this week when Judah moved the goal posts again, insisting the fight should be at 10st 3lb, which effectively ruled Mathew, as he fights at 10st 7lb.

Ricky who now in between his fights is a promoter himself, believes this is a typical example as to why fans have had enough and are turning over the TV to the Ultimate Fighting championships, where the best fighters face each other.

“I look at boxing from a different angle now and it is dying of death compared to the fashionable UFC,” he said. “Mathew was taking all the risks. He was prepared to go out to Las Vegas to fight in Zab Judahs back yard. “He was fighting against a former undisputed champion, at a much higher level than he had ever fought. He was taking all the chances and then they say they want the fight at 10st 3lbs. “They knew Mathew was 10st 7lbs when the fight was made. There is no way he could drop four pounds. “Its no wonder boxing is dying. Boxing is now full of people who talk the talk, but don’t back it up. If you go to UFC you are seeing proper fights.”

Mathew is now set to fight Lovemore N’Dou for the IBO welterweight title, but a clash with Judah on the under card of Floyd Mayweather Jnr’s bout with Miguel Cotto was seen as a chance to break into the US. Ricky is still undecided about his own future in the ring, and will continue to promote boxing until he as decided, after losing in his last fight to Pound for pound king Manny Pacquiao in May this year.

Ricky himself a fan of UFC, says though he will not be switching sports. “Im a fan of UFC because it is all action, proper fighting,” he said “They are going the right way about it to get people interested, “There is a concern in boxing that UFC is taking it’s place. People seem to get more value for money. UFC would be right up my street but I think I will stick to boxing,”

Boxing needs to have a look at itself now and start with the fundamentals of what makes our great sport what it is. Fighters do avoid each other, but looking back through the ages, it was sometimes the case that champions of the past side stepped opponent’s that them or there managers deemed to dangerous, and there is a list as long as the champions we have had, of the champions we haven’t. Being connected is as important today as it was when the mob ran the game.

Boxing fans have been short changed one to many times and are starting to get fed up. The ardent fans will stick with it, but the new fans have a choice and many are choosing UFC.

Ricky’s next boxing promotion will be at the Manchester Velodrome, which is opposite Hatton’s beloved Manchester City ground in Eastlands on August 21st, when local Manchester fighters, David Barnes, Craig Watson and Olympian Joe Murray. Reports on these fights coming soon.
By Chris Maylett