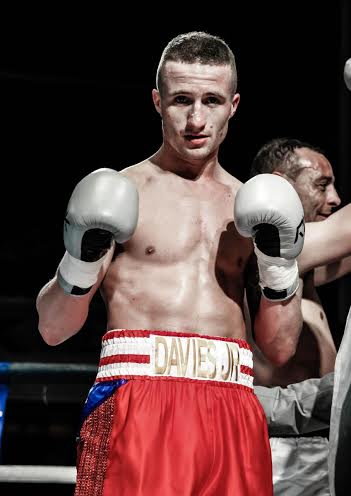 Exciting Liverpool super-lightweight prospect Robbie Davies jnr has been rewarded for a recent run of eye-catching stoppage victories with his first ten-rounder.
The unbeaten 26-year old has stopped his last six opponents and, after despatching the normally durable Ryan Hardy for the first time in the Yorkshireman’s career inside two rounds in December, Davies faces tough Finn, Jarkko Putkonen, in Liverpool’s Devonshire House Hotel on Saturday 5 March.
Davies’ manager, Neil Marsh, rates his charge as one of the hottest prospects in British boxing and is keen for the scouser to be as active as possible after early career hand problems slowed his rise through the rankings.

Three quick fire victories in a little over five months in the second half of 2015 have convinced Marsh that the son of popular and exciting 1970’s Liverpool light-middleweight, Robbie Davies, is ready for bigger tests. Putkonen, a UN peacekeeper who has lost just one of 13 fights; a points decision to Chorley’s Jack Catterall for the WBO Inter-Continental super-lightweight title in Manchester in October, has never been stopped as a professional, but Marsh revealed that his original choice of opponent was even more formidable.
[sam id=”1″ codes=”true”]
Marsh said: “I’m delighted to announce Putkonen for Robbie. Its a real test for him in his first ten rounder. Putkonen has lost only once when he took Catterall the distance in his last fight. Robbie’s last few fights have been made with this target in mind, to get the rounds in, and Putkonen should be able to do that. It’s a great fight at this stage of Robbie’s career.
“We had originally lined up the Ukranian, Serhiy Fedchenko, a former world title challenger for this fight but he had to pull out injured. We’re not overlooking Putkonen but, should Robbie be successful – and the way he disposes of people I’m confident he will be victorious again – then we hope to meet Fedchenko, who is vastly experienced, still highly rated and has fought at the highest level, for a title later in the year.”
Adding that he firmly believes Davies is one of the best prospects in the UK at any weight, let alone at 10st, Marsh added: “2016 can be Robbie’s year. His skill, strength and power are well-known to those around him but we believe there is even more to come and this can only be good for the paying public. He’s an exciting fighter with power in either hand and is the boxer to watch this year. He’s gone a little under the radar a bit so far but 2016 is when he will arrive on the big stage.”
Already hard at work in preparation for the title fight at Dave Tonks’ gym in Speke, Liverpool, Davies said: “I’m made up Neil has got me my first ten rounder and that its at home. I don’t mind who I fight, Putkonen, Fedchencko, anyone, I just want to get out there again and continue my great finish to 2015 into 2016. I believe I’m one of the best in the division and a good win here will make people stand up and take notice. I predict another win and then we can look at fighting for a belt and getting even bigger names later in the year.”
Davies v Putkonen will take place at Liverpool’s Devonshire house Hotel on Saturday 5 March. Blackpool’s English welterweight champion Adam Little and heavyweight Bill Hodgson will feature on the undercard with ticket details to be announced soon.