Is Moore Ready for World Class? Has Rhodes still got it? 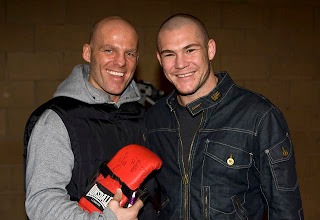 The fight is also being classed as a WBC title eliminator, which adds another dimension to this intriguing all British title fight. Moore 30, is rated number 3 by the WBC behind Ceaser Chavez Junior, the son of the legendary Mexican Julio Ceaser Chavez, who is 1 and American Kermit Clintron at 2, all in line and hoping for a shot at champion Sergio Martinez.

Although Moore is behind the two, he doesn’t believe it is justified!
“Its a scandal, really,” said Moore. “I’m just hoping that the performance I aim to put on, on Friday sends a message to them to make them say `what are we thinking?”
“At the very least I want them to put me in a final eliminator against Chavez Jr.

“There’s no doubt he’s improved but there’s no way he warrants being number one. It does grate with me but first and foremost I have to make sure I beat Ryan Rhodes impressively and then we’ll think about pushing for it.”
“It’s all a bit political but it’s the belt I’ve always wanted to go for, I think it carries the most prestige and hopefully I can fight for it in 2010.”

“It’s the biggest fight of my career,” Moore told the Salford Advertiser. “I’ve had big fights before but this is by far the most important and it is exactly at the right time because I am in the form of my life.

“I thrive off the pressure and have always performed better than when I’ve just been expected to win easily.

“Often I’ve been guilty of under performing in meaningless fights and, if anything, there has been more chance of me losing purely out of complacency, but there is no chance of that against Rhodes, who is a dangerous puncher.”

There is a mutual respect between the two fighters and there’s been no slagging off or silly ticket selling antics, this fight doesn’t need it.

Ryan Rhodes as invented himself in Boxing and it almost seems like another career for Rhodes who as left his tag as `The Spice Boy` in another era.

But, at 32, is he as good as the 20-year-old who won the British title all those years ago? The Sheffield family man is in no doubt.

“People cannot believe how I have come back, bigger and better. I feel my style is so much better now,” he said.

“If I boxed the Ryan Rhodes of 1996-7 the one now would hammer him, honestly! My style,my defence is so much better. I concentrate more on speed now.

“I was reckless when I was 20 years old, I just had it in my head I needed to hit the fellow and it was over.

“Now if I hit the fellow and he doesn’t go, I have got a plan A, B and C – and that’s very important in this game.”

“We have both been on the circuit for so many years I feel that us meeting at this stage of our career means so much more than if we had met five,” he said. “There is so much more to gain.”

Rhodes is totally focused on Friday’s televised contest at Bolton Arena. But he is also hoping his Hillsborough pal, Kell Brook, will win his British welterweight bash with Michael Jennings a week later.

The pair used to go to the same school in Sheffield.

“I’m fighting for the European title, the most important fight and hardest of my career. The week after he is fighting Michael Jennings, his hardest opponent – you couldn’t even have written that in a script, could you? ” he said.

Rhodes thinks his clash with Moore will be the closest.

If the Greater Manchester Moore wins, it should give promoter Frank Maloney the leverage to gain a WBC title shot. It would be only what Moore deserves, and would most likely involve going to America to do it in the bright lights on the biggest boxing stage of all. And I see Moore staking his claim for the world title shot, when his high tempo pressure fighting eventually grinds a gallant Rhodes down in the 7th round. By Chris Maylett