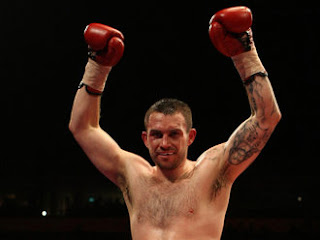 Paul Smith and Tony Quigley met at the Liverpool Echo Arena tonight in an all scouse British super-middleweight championship fight for Quigley’s Title, which he won by beating Tony Dodson.

On Wednesday they showed their dislike for one another at the press conference ahead of their derby meeting, for the Lonsdale belt. Quigley who said “I am British champion and it is going to stay that way. “I do not want to give it away, especially to Paul Smith. Started the fight trying to draw Smiths lead, while Smith who has an habit of standing off at times made a steady start.

Both landing good punches at times throughout the first five rounds, it was hard to split the two. Smith suffered a cut to his right eye in the 5th and Mick Williamson went to work to stem the blood into his eye. The fight was beginning to get a little untidy and Quigly was just about in front by the mid stage.

Referee Richie Davis warned the both fighters to tidy up there act at the start of the sixth and the change in tempo in the 6th round suited Smith who began to land the cleaner punches.

The fight so close at this stage was becoming a case of who wanted it more, and with none of them looking to hide or take a backwards step, they were willing to trade, although the fight was still a little scruffy.

Smith walked onto a good right hand from Quigley at the start of the 8th round and then another right as Quigley made a quicker start. Both really feeling the pace now, and are struggling to land clean shots. The holding and mauling was still going on, as referee Davis shouted out another warning to both fighters.

In the 9th, Smith try’s to get his boxing together, but Quigley just doesn’t let him get into any rhythm. With the crowd now booing and showing there disappointment at the holding and possibly the anti climax to this fight, as it promised to be a small hall derby classic between these two proud Liverpool pugilists.. Quigley took the round and looked at this stage as the one who wanted it more. but boxing skills were being thrown out of the window.

The 11th see’s Smith grits his teeth and push the pace, throwing out his punches to the body and catches Quigley with a low blow, Quigley takes a breather, and the ref warns Smith who’s blood from his cut. is now dripping down his face. Smith ends the round well catching Quigley clean.

A hug by the fighters at the start of the 12th round of this fight and both fighters look tired as they start the round. Smith is really going for it now and hurts Quigley with some good punches as he really goes for it in the final round.

As the bell ends the fight they both raise there hands, in what was a very hard contest to judge. and most at ringside had it close either way.

Promoter Frank Warren promised the Liverpool crowd a rematch between the pair, whose bitter personal relationship had dominated the build up to the bout.

“My heart and fitness got me through,” Smith said. “I was awful in the middle rounds, I was thinking too much, but when I let the hands go I did OK.”

There had been plenty of rivalry between the cross-city rivals, but the bad feeling seemed to have eased afterwards. “I’ve had Tony Quigley on my brain since March,” Smith said. “I’m sick of the sight of his face. But it’s boxing and you have to have a bit of spite.”

On the under card, Olympic gold medalist James DeGale made it four wins from four with a third-round stoppage victory over Ally Morrison.

after the fight he said on Sky Sports. “I’m enjoying what I do, This is my job. He was tough in there, but it’s going to take a better fighter than that to beat me.

“I’m learning. I’ve had to make a fresh start from being an amateur – but I’m strong and I know where I’m going.

The 23-year-old Londoner came into the contest against unbeaten novice Morrison (2-0-1) aiming to make it three first-round stoppages in a row after impressing in his past two outings.

While he failed to do that it was another good performance by DeGale, who landed hard shots throughout the fight before stepping up the pressure with a series of left hooks to finish Morrison.

Frank Warren told Sky Sports that Gavin could be ready to go for a title next year if he continues to progress and improve as he is doing. Gavin is looking more adapted to the pro ranks, and looked accomplished in his work tonight.

Liverpool’s heavyweight hope Tony ‘Bomber’ Bellew continues his professional career with an impressive first round stoppage win over the dangerous Hungarian Jindrich Velecky, who going into the fight had a record of 15 knockouts in his 16 wins. after the fight Bellew said, “I’m a smashing machine, it’s just what I do,”