Manchester’s John Murray and London’s Kevin Mitchell admit to being friendly enough out of the ring, having crossed paths on the circuit over the years and as young amateur prospects.
But both are now consummate professionals and on Saturday July 9 at the ExCeL Arena in , London, friendships will be put aside and war declared, when the two best lightweights in the UK try to ‘take each others heads off’ in a ‘North vs South’ potential boxing classic!….. Before going for a pint together afterwards!
Mitchell 27, the former British and Commonwealth super featherweight champion, hasn’t fought since losing to Michael Katsidis in a WBO lightweight title challenge last May. But sees this fight with Murray has his chance to get back in the world title picture.
“‎You know outside the ring and all this crap we don’t like each other, Its all rubbish, I’ll sort this out either way. Its gonna be a big fight and I promise you, its got war written all over it. We get on well, but when we get in there, we’ll have a tear up and do our thing! – Mitchell told Frank Warren TV.
But Mitchell, 31-1, 23KO’s) believes that Murray will not be the best opponent he has faced to date and believes he has faced better fighters than the Manchester man, but recognises Murray’s skills and will not be underestimate him.
“Ive been in there for a lot of big fights, big names, Katsidis was a massive name, Breidis Prescott, when everyone though I was gonna go out there and get knocked out in two or three rounds, I went out and school him and then beat him up, so I think I’ve been in at a bigger level so far, but I wont take this fight lightly. Mitchell added.
However Murray, unbeaten in 30 fights, winning 18 by KO is the former British and European champion, having relinquished the belts to chase world success, but before that he must over come his nearest domestic rival Mitchell.
Murray 26, is determined to make a big statement, knowing a world title shot is just around the corner. The Mancunian boasts the longest unbeaten run of any current UK boxer and is ranked number 3 in the world by the WBC, with only the world elite in front of him.
Murray also relays Mitchell’s thoughts and admits to getting on with his lightweight foe, but says that on fight night, the business of boxing will take president over any friendship they have.
“We get on outside the ring you know but that doesn’t mean nothing, once were in there its business. said Murray.

“Both of us are standing in each others way and trust me we’ll both be trying to take each others head off. Were gonna have a fight and that what boxing is. But we’ll have the fight and I’m sure after we’ll go for a pint with each other that’s the way boxing is.”

“Its the biggest fight of my career so far not just with Kevin and his record but what it can lead to a world title crack for myself. Murray added. 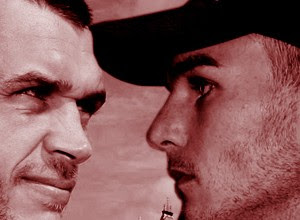