David Haye "Valuev wants to do a number on me"

In Nuremberg on November 7th, Britains David Haye will climb into the ring with the biggest and heaviest, heavyweight boxing champion of all time, and as reports suggest a very angry one at that! The Beast from the East Nikolai Valuev, who promises to make the Brit pay in the ring.

Haye set out to rattle Valuev from the day the fight was made. Haye prior to signing to fight Valuev was set to fight Vitali Klitschko, and was already into the swing of things making Dr Iron fist himself, get his mad up! So when the fight with Klitschko fell through and the Valuev one was made, Haye picked up where he left off, T shirts an all..

But there is a method to Hayes madness, and the former Undisputed cruiserweight champion is confident he has won the mind games with Valuev.

Valuev’s WBA heavyweight title is on the line and the challenger feels he has succeeded in riling the giant Russian with his curses, that he is a “circus freak” and “ugly”.

Haye’s method is to make Valuev come after him all guns blazing looking for the knockout, when they clash live on Sky Box Office, leaving himself open to his quick counter punches.

“I definitely feel I’ve got under his skin,” said the former undisputed cruiserweight world champ.

“The word coming out of his training camp in Germany is that he’s really motivated.

“He’s knocking all his sparring partners around and really wants to do a number on me.

“That’s great because I really want him to come out at me, swinging. The more aggressive he is, the better and I will be able to go to work with my counter-punches. So, so far, so good.

“This is one up for me in the mind games. And I’m going to have something else planned for him at our press conference in Germany before the fight.”

Haye feels his own confidence as not yet transcended to the fans, and Haye admits many boxing pundits doubt his chances of beating the 7ft 2ins Valuev because he is inexperienced at heavyweight.

“I understand where those people are coming from and they would like to see me fight more fights at heavyweight, get bashed around a bit more and knocked down,” he said.

“I know I’m going into this fight with a lot of question marks hanging over me at this level, but I just want to win the title as quickly as possible.” 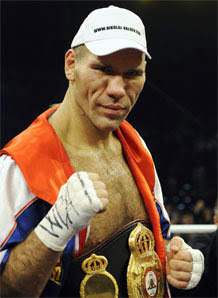 Behind all the taunts, jibes and mickey taking Haye knows this is a big call, and when he is in that ring come the night and the bell goes and the talking stops, and when the 7ft 2, 24-stone Valuev is looking down on him, Haye the 6ft 3in, 16-stone south London challenger knows he will need to perform like never before, to try and dent, the up until now solid chin of Valuev.

This week in rather reflective mood, Haye admitted that he was going to have to perform like never before to dethrone this Hugh champion and live up to the David v Goliath billing.

As the 29-year-old Haye admitted from his training hideaway under a railway arch near Vauxhall station last night: “Without a doubt this is an obstacle I’ve never come close to facing before. He can take a shot better than anyone that I’ve fought. He can punch harder than anyone that I’ve fought. He’s got a better record. He’s superior in every way to anyone I’ve ever fought.

“If I do what I normally do, if I perform, for instance, how I did against Monte Barrett [referring to when he went down on the way to a fifth-round stoppage win over the 38-year-old American veteran] I don’t think that will be anywhere near good enough to get me near the final bell.”

After weighing up the risks involved. Haye was back to his confident self when He revealed: “I’ve got to change the whole bio mechanics of how I throw a punch. But I don’t think this guy will have seen anything like what I’m looking to dish out on him. Once Valuev is out of the way, I can move on to bigger and better things.”

One man who does believe Haye has a chance, is Britain’s former undisputed heavyweight champion Lennox Lewis who was in Leeds meeting young people from the community project Positive Futures. Where he was launching a new project, boxing and martial arts initiative Lennox Lewis for Positive Futures.

Lewis, who was the last man to unify the heavyweight division and now works as a boxing summariser on American TV, admits the physical differences between the pair will make it tough for his fellow British challenger.

But he also has faith in Haye’s skills and is refusing to rule out an upset.

“David Haye has a lot of talent,” he told Sky Sports News.

“But he’s boxing against a guy who weights a lot more than him and way taller than him, so he has an uphill battle – but he does have the talent to do it.”

The Hayemaker though can take heart from Valuevs unconvincing last defence of his title against veteran former undisputed champion Evander Holyfield in December.

Valuev, 36, was awarded a highly controversial points win. and many experts and fans thought that Holyfield had done enough to win, and this bodes well for Haye.

Holyfield also started his career at cruiserweight and although he is now just a shadow of the great fighter he once was, he still gave it Valuev!

A sign of how much the standard of the heavyweight scene as fallen in recent years?

The worry that Haye has is the fight again is in Valuev’s adopted Germany, and the worry is that like Reg Gutteridge, God bless him would say “You have to knock em out to get a draw over there”

But today, again back in the Haymaker mode, Haye, said: “It doesn’t bother me at all that the fight might go to points, I’m not worried about that.

“I went over to France to beat Jean Marc Mormeck in his back yard for the world cruiserweight title so I’ve done it before.

“If I hit Valuev with a number of bombs he will keep coming at me with zombie eyes. I’ve got to do such a number on him even Nick Griffin would score the fight to me.

“He will definitely come at me hard and try and knock me out. But he’s never fought anyone in their prime before like me.

“He’s fought a lot of people when they are finished and on their way down. It’s going to be a shock to his system when he fights someone like me on the way up.

“He’s a big guy and I won’t be surprised if he breaks the floor of the ring when he gets knocked down.

“I think I’m the fittest yet for a fight, particularly in sparring when I put the foot on the gas and feel there’s a lot more to come.”

Interview with David Haye at the Gym