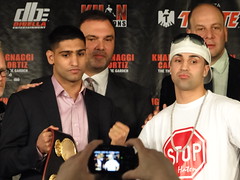 Image by Chamber of Fear via Flickr
Amir Khan has warned Paulie Malignaggi he remains supremely confident of victory ahead of his WBA light-welterweight title defence.
Khan (22-1, 16 KO’s) will make his American debut when he takes on Malignaggi at New York’s Madison Garden on May 15.
Amir Khan vs Paulie Malignaggi Preview Video

Khan is in confident mood and remains supremely confident of victory ahead of his WBA light-welterweight title defence, training in LA at the Wildcard gym with new trainer Freddy Roach, Khan spoke of having no doubt he would be victorious at the press conference.

“There is only going to be one winner, I am going to keep this title, it is mine” Khan said. “He [Paulie Malignaggi] has had some great fights in the past, beaten only by great fighters like Ricky Hatton and Miguel Cotto – but now there is another fighter coming out who is going to beat him,”
“We have watched a lot of Paulie [Malignaggi], and we really think it is a style we can beat…it is going to be electric. We both have heart and just don’t quit.”
Amir Khan vs. Paulie Malignaggi Press Conference, including interviews and opinions on the fight from Lou Dibella, Shan Khan (Amir’s Dad) Steve Farhood, Sherif Younan, Freddy Roach.

“You’re going to see a totally different style, because every fight I’m getting better and better and I’m working on new things every time. Freddie doesn’t want to overload me with new stuff, but every time I’m learning more and more. I can say come May 15, you’ll see a totally different Amir Khan, you’ll see a new style, you’ll see something new about me and I think that’s one of the reasons why fans love me, because every fight I’m different, I’m very explosive and I bring something else to boxing,” said Khan. 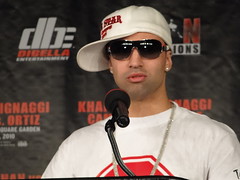 Malignaggi (27-3, 5 KO’s) claims to have a lot of respect for Khan, but  has insisted that his experience and the fact that he is the home town favorite, will weigh in his favor, and see him be crowned the new WBA lightwelterweight champion.

“I got a lot of respect for Amir. He’s going to get beat May 15th, no doubt about it, but I got a lot of respect for Amir. I got a lot of respect for the guy, but I feel a certain way about the other guy and I said certain things and that’s about it,” said Malignaggi.
“I bring more experience. I have a lot of experience on a world class level that Khan hasn’t had, but sometimes experience can be overrated. If you can fight, you can fight regardless of where you’ve been or how you got there. More than that, I bring a different versatility than anyone he’s fought before, so he’s going to see something different in that way. I’m not your typical textbook boxer. I fight a lot off athletic ability, off of reflexes,” said Malignaggi.
Paulie Malignaggi talks about fighting England’s WBA Super Lightweight World Champion Amir Khan on May 15, 2010 at Madison Garden. The fight will be televised live on HBO’s Boxing After Dark in the United States, and ITV in the UK

“I’m a different fighter in my last couple of fights than before, because I made a change with my team and found my match with [new trainer] Sherif [Younan]. I’m not the same fighter you saw against Ricky Hatton or Juan Diaz the first time.

“I don’t feel like I talked my way into this fight at all. I think this is a great fight and styles make fights, so this one was made.

“I think I’m getting better and better and my resume speaks volumes, but Amir has never fought a guy like me.

“Amir has had the red carpet treatment so far in his career and bar none, I’m the best fighter he has ever fought.

“He may have a great career ahead of him, but on May 15, he will get his second loss.

Spencer Fearon interviews Amir Khan and Paulie Malignaggi in London ahead of their fight, both fighters talk tactics.

“The Hamed-Kelley fight was the first live fight I ever saw, when I had only been training for six months and wasn’t even a pro yet, that was the fight that inspired me to pursue my career as a fighter.

“All of these Brits come to the U.S. to make their debuts against New Yorkers, and yes, they all have the common denominator that they have all beat us, but they were never tested like I will test Amir in his debut.

The fight is to be shown live on ITV, after team Khan brokered a deal with them after leaving SkySports in favor, after it was reported, Sky offered Khan a take it or leave it offer, which he decided to leave! Will be great to see live boxing back on terrestrial TV.
Amir Khan vs Paulie Malignaggi Boxing fight preview video (ruffcut / UC teaser)
We have a good fight to look forward, with two boxers at the top of there game and well up for the fight at boxing’s Mecca. Amir is well aware of the historical significance of this fight in terms of a British fighter defending his world title against a native New Yorker, in the arena that has hosted the very best pugilists.
“Coming to the mecca for my US debut boxing at Madison Garden, it’s been my dream,” Khan said.”Everybody wants to fight here where Muhammad Ali, Mike Tyson and everyone have fought. I’ll have my name in the history books.”
Madison Garden,
Tribute to the Greatest Fight In Boxing History, held at New York’s Madison Garden on March 8th, 1971. Fight of the Century was the promotional nickname given to the first boxing match between champion Joe Frazier (26-0, 23 KOs) and challenger Muhammad Ali (31-0, 25 KOs), held on March 8, 1971
MSG is also known for its place in the history of boxing. Many of boxing’s biggest fights were held at Madison Square Garden, including the Roberto Durán-Ken Buchanan world title fight, and the first Joe Frazier–Muhammad Ali bout,(video above) amongst many other great fighters.
Naseem Hamed fought another native New Yorker Kevin Kelly in what was an exciting affair while it lasted, and recently Joe Calzaghe ended his career at the garden when he defeated ring legend Roy Jones Jnr in what was to be his last fight.
Before promoters such as Don King and Bob Arum moved boxing to Las Vegas, Madison Square Garden was considered the Mecca of boxing.
The original 18½’ × 18½’ ring, which was brought from the second and third generation of the Garden, was officially retired on September 19, 2007 and donated to the International Boxing Hall of Fame after 82 years of service. A 20′ × 20′ ring replaced it beginning on October 6 of that same year.