Goodwin Promotions present ‘The Night of the Rising Stars’ at The York Hall : (24th April 2010) 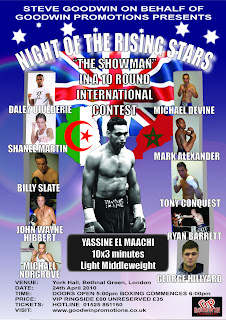 Goodwin Promotions present ‘The Night of the Rising Stars’ this Saturday at the famous York Hall in Bethnal Green, East London. Showcased are some of the UK’s most exciting prospects. Featuring three Current and Fomer title holders and many future ones in a great Eight fight bill.
In the main event featuring Yassine El Maachi, Goodwin Promotions have put a £15,000 bounty on the head El Maachi and Frenchan Bertrand Aloa is the first man to try his luck.
El Maachi is proclaimed to be the most avoided boxer in Europe according to Goodwin Promotions, and the showman has recorded eight straight wins since linking up with Kevin Maree and Don Charles.
Previously self trained Yassine assumed the role of a journeyman before deciding that this was not for him and linked up with professional trainers. Now ranked 48 in the World by Box Rec fighters continue to avoid him. Anthony Small has ignored a £50,000 challenge amongst others.
Bertrand Aloa is the first to chase the offered bounty and so challenges Yassine El Maachi for the International Masters Light Middleweight Title and hopes to stop Yassine to receive a £15,000 pay day.
Bertrand receives his basis purse but will receive the biggest purse of his career if he stops Yassine during the 10 round contest.
Promoter Steve Goodwin has offered this incentive to get Yassine fights and this offer is on the table on a continuous basis.
The event entitled “Night of the Rising Stars” showcases some of the UK’s exciting talent on the undercard.
Undercard:
Unbeaten cruiserweight prospect Tony Conquest fights in his first International bout in a 6 round contest. Tony takes on the Bulgarian Tayar Mehmed. Mehmed is not coming to make the numbers up and Tony faces a tough contest. Tony is already ranked in the top 10 in the country by Box Rec..
Sensational prospect Michael “Simply” Devine (3-0) takes on the tough Mark “The Flash” Alexander in a 4×3 minutes Lightweight contest.
English Super Featherweight Champion Ryan Barrett will take on Sid Razak over 6×2 minutes in a lightweight contest. After losing last time out Ryan is determined to put on a good show and force himself towards another title shot in the next 12 months.
The undefeated John Wayne Hibbert 5 wins (4 Knockouts) in his first 6 round contest against seasoned professional Matt Scriven.
The hard hitting Michael Norgrove making his professional debut at Light Middleweight. Michael is taking on the very experienced Duncan Cottier.
Welterweight prospect Bobby Gladman who has won 5 from 5 takes on tough Lutonian Gavin Putney over 4 3 minute rounds.
Super Middleweight Eder Kurti (8-4) takes part in a 4 rounder against the tough James Tucker. Eder is on a roll having won his last four fights.
For more information call Steve Goodwin 0n 01525 851150 or 07875 382433
Tickets are available at £35 standard and £60 Reserved ringside.
www.gooodwinpromotions.co.uk