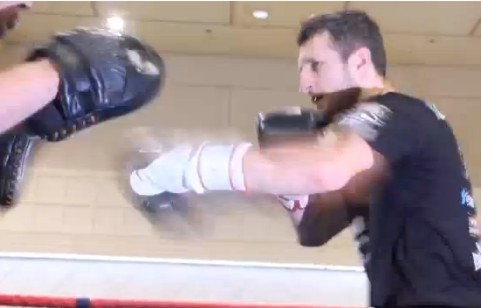 Carl Froch in preparation for next weekends clash against British rival George Groves conducts a media workout with his coach Robert McCracken in his home city of Nottingham.

Froch will be defending his WBA and IBF world super-middleweight titles against Froch at the Manchester Arena. (Saturday November 23rd)

Froch: “I am going to beat him in spectacular fashion and potentially end his career. “

Froch has claimed he could end the career of the Groves, who he has took a fierce dislike to in the run up to this fight, branding his London challenger as “arrogant, cheeky, disrespectful and just downright rude”

The pair have exchanged verbal battles ahead of the war, which promises to be a classic in the mould of Nigel Benn and Chris Eubank, sworn rivals who too couldn’t stand the sight of each other and who went on to produce two great occasions when they clashed.

This will be Froch’s 14th world championship fight and unbeaten former British and Commonwealth champion Groves’ first shot at a world title.

Froch, 36, has not been impressed with some of the things has said but claims that has only motivated him more to be victorious on the night.

“My motivation is my two world title belts, my legacy and the fact this kid is coming in arrogant, cheeky, disrespectful, downright rude and I don’t like that.” said The Cobra, after his workout.

“With boxing I get the chance to set the record straight and make sure I put that right.

“There is no better job, and no more satisfying job for me to do, other than giving George Groves a pasting. I am looking forward to doing that.

“If he had been a bit more humble and a bit more polite, a bit placid, in the build-up and appreciative of his chance against the champ, then I might have taken my foot off the gas.

“I prepare very diligently anyway, I am always very professional in what I do, but his attitude and the way he has conducted himself – very, very childishly, immaturely, arrogantly – in the build-up to the fight, has given me that little bit of extra motivation to just grit my teeth in sparring and push on at the end of the run, everything that makes me a bit fitter and sharper on the night.

“I am taking it very, very seriously and George Groves is in a world of trouble.