In the Ring with, Paul Smith, Liverpool’s British Super-Middleweight Champion

The Real Gone Kid was hoping to challenge Belfast’s Brian Magee for the European belt this summer, a fight planned for Liverpool, but because of the severity of the cuts in the Dodson fight, it doesn’t look like it is going to happen now this summer.
The full fight Paul Smith vs Tony Dodson
The 27-year-old bravely managed to fight on through a veil of blood from the very first round to successfully make the firs defence of his Lonsdale Belt, which he won in 2009, defeating another Scouser Tony Quigley.
The cuts he suffered, one opening up over his left eye and two on his forehead, will likely rule him out for up to six months, which may force Magee into looking elsewhere for his first defence.

“The cuts are healing fine, the only one to worry about is on my eye and that has healed the best of the three. The rest are in my hair!” said Smith.

British Boxers caught up with Paul Smith to ask him his plans and to find out about Pauls career to date and to find out the real Paul “Smigga” Smith.
Naming Mike Tyson as his hero and inspiration for becoming a boxer, along with “Sugar” Ray Leonard, Smith is ready to try and emulate his hero’s by by making the step up to world level and a world title. 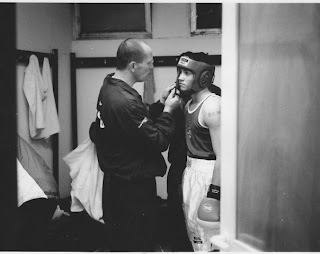 Under the initial guidance of Jimmy Albertina and Paul Walmsley, The Kirkdale gym became one of the most successful club in Liverpool over the last  30 years, with a great history in churning out some of Liverpool’s best boxers including, Andy Holligan, Joey Frost and Tony Willis to name but a few.
Smith comes from a boxing family and he and  brothers Stephen and  Liam became the first group of siblings to all win The Amateur National Championships. 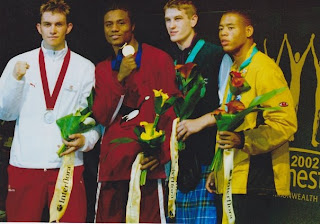 With good wins early on in his career, defeating the tough Ryan Walls and Steve Timms, and ended the latter’s career with a devastating first round knockout.
In 2007, in a milestone fight for Smith, he KO’d the Belgium Alexander Polizzi in Liverpool, winning the WBU International middleweight title in the eighth round.
After the Polizzi fight Smigga headed to the States to fight home town favorite Jonathan Reid; the Nashville, Tennessee, resident lost to Smith on a Technical Knockout.
Then in September 2007, after his American exposure, Smith joined nine other boxing hopefuls as members of Season 3 of hugely popular Contender series. Smith fought rival David Banks from Portland, Oregon, and ended with a win for Smith by split-decision.
However, since Smith had the lowest point total out of the remaining boxers, he was disqualified. The victory over David Banks was fought in Pasadena, USA and was broadcast on ESPN and ITV; Ray Leonard said Paul let his anger take away from his ability. Paul was left with two cuts, one on his nose and another around his eye; this meant he was medically unfit to continue the contest regardless of performance.
Paul Smith in The Contender
Smith returned to England and defeated Cello Renda to win the vacant English Middleweight title. He lost the title in his very next fight against Steven Bendall on 21 June, 2008 in Birmingham, England, on a much contested points decision.
British Champion
On 30th October 2009 Smith challenged fellow scouser Tony Quigley for the British Middleweight title in Liverpool’s Echo Arena. Quigley was the holder after defeating Tony Dodson only months earlier at the same venue.
The fight was a tight affair with Smith eventually winning via split decision over 12 rounds thus crowning him the new British Middleweight title holder. Smith’s first defense of his title was the war with Dodson at the Echo arena.
Paul could still get the fight he craves, if the cuts heal in time, against former British Champion, and current European champ, Brian Magee, a fight that could possibly be on the under card of Kevin Mitchell’s world title bid at Upton Park. watch this space…

Paul took time out to speak to British Boxers in the In the Ring With? series which will be a new feature for British Boxers where we a short bio and interviews with your favorite British fighters past and present.

British Boxers are “In the Ring with? PAUL SMITH British light-middleweight champion- Boxing’s Questions and Answer Round!
Paul, When and how did you get into boxing?
I was 9 and went to my local gym(Rotunda ABC – It was 20 seconds walk from my house. Loved it instantly) I have always liked boxing, always watched the fights and read the magazines as a kid. I’ve got a great photo of me and my brother(on this page) in our underpants boxing. I think I was 5 and Stephen was 3.

What was your first gym and trainer?

Rotunda ABC in Kirkdale. Jimmy Albertina and Paul Walmsley were my main 2 trainers to start out with. Probably the most successful club in Liverpool in the past 30 years, great gym with a lot of history. Ex fighters like Andy Holligan, Joey Frost, Tony Willis etc

Toughest opponent you faced?
As an amateur I faced a few tough kids. Sam Webb, Jean Pascal, John Duddy, Lee Beavis and Reda Zam Zam to name a few
As a pro there’s been a few tough kids that have been hard to crack but none really stand out to mention individually.

Toughest Part of being a boxer?
Sacrifice and staying dedicated. Looking for the light at the end of the tunnel that doesn’t seem to be coming!
It’s all worth it in the end when my hand gets raised I suppose.

Who do you wish you had fought or want to fight?
There’s still people I’d LOVE to fight, obviously because they’re the best in the business. Carl Froch has done brilliantly for himself and it’s great to see a British lad doing the business on the elite scene. Good on him, it’s a fight I’d obviously love, I’m not ready just yet but as the question said, it’s on my wish-list!

Best fight you have seen?
Benn vs McClellan – Brilliant from the first bell. Warriors.
Live and in person it was Moore vs Macklin or Arthur vs Gomez. Brutal fights. Loved being part of the team on them both.

Dream Fight? who v who?
Tyson vs Ali. I feel a young 22 year old Tyson was unstoppable.

Favorite all time boxer, World and British?
World fighter is same as above. 22 year old Tyson or Sugar Ray Leonard – He had it all. What a fighter.

Favorite current fighter World and British?
World for me has to be Pacquiao. I love his attitude and obviously he can fight!
British is a tough one. I love watching Kevin Mitchell. I got slagged off years ago for saying he was a bit special, I think he’s got it all myself. I love watching lads I like doing well though, lads like Macklin and the rest of my mates. It’s important to keep some mates in this game!

What do you do when you are not Boxing?
I spend as much time as I can at home. I’m a bit of a hermit and hardly move. I love my home life and like relaxing. I race pigeons too! Love that and have done since I was about 6 years old.

Which British Boxers should we look out for?
My brothers Stephen & Liam, I’m bound to say that but trust me they can fight! (Pictured right; Paul aged 4, Stephen aged 2)
Tony Bellew, Paul Edwards, Joe Selkirk…. They’re local to me.
Nationally I’d say Mitchell, Macklin, Cleverley, Brook, Murray and Barker.
Your Motivation?

My son. My family. Basically just winning and being the best, making them proud of me. I get out of the ring and as long as I have my belt or a new one, to see every one’s faces when they look at me makes me happy. Making my family proud keeps me motivated.

What would you change in Boxing?

There’s not much now to be changed, I feel boxing certainly in Britain is very safe and health conscious. Maybe on the world scene one or two of the governing bodies take the piss with these bogus titles they make up for a sanctioning fee, but we have no control over that.

What music do you listen too?

All kinds. I have a pretty big collection of music. i used to DJ but have always been a fan of all music.

The Secret. Great book. I read now and then, keeps the mind stimulated.

God knows. Anyone who did a proper Scouse accent…. It’s a hard one to do properly!

Pasta or steak and potatoes.

What other sports do you watch?

My brothers, gym mates, Macklin…. Loads. We’re lucky in boxing there’s loads of lads you meet who are diamonds. I’d be here all day naming them

Which 3 people would you be stranded on a desert island with?

Rachel McAdams – Tidy 😉
Gordon Ramsay – To cook whatever we caught.
Mark Knopfler – so we had someone who could play anything great on a guitar.

Tell us something we don’t know about you?

Not many people know that I race my pigeons, but I said it before so now they do!

Who is the greatest British Boxer of all time?

On achievement it has to be Hatton or Lewis.
Whether people agree or not is another thing.
There’s been some great fighters and I wouldn’t disrespect them by giving my opinion on who’d have beaten who!

How and where can www.britishboxers.co.uk be improved?

I think the site is keen, and that’s half the battle. You fire interviews out there and half the time it is better than getting the emails requesting, then the email to confirm an interview being arranged, then the interview actually happening! Keep it going and good luck with it!

One thing you cant live without?
My Son
Favorite Quote?
“If you go there in the mind, you’ll go there in the body”
Best gift you have ever been given?
My Son
What does your future hold for Paul Smith?
Hopefully a European title and a world title. That’s the dream and I’ll give it my all to make it come true!

Thanks for the interview, good luck with the site and THANK YOU to all my support, friends and family. Team Smith 😉

British Boxers would like to thank Paul Smith and wish him the best of luck in his career. By Chris Maylett