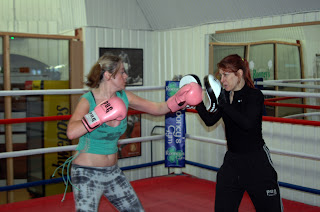 Female professional boxer Marianne ‘Golden Girl’ Marston announced this week the launch of her new website – www.womensboxingclasses.com – as well as a series of boxing, and boxing based fitness, classes at The Boxing Clinic in Islington, North London and The Tokei Gym in Southwark, South London. (Marianne pads work with SpiderBaby Vocalist Francesca Santamaria, above)

In 2009 Marianne, the protégé of Heavyweight Champion of the World Smokin’ Joe Frazier, (Marianne being coached by Smokin’ Joe Frazier in January 2008) returned home to London following two years being based in Philadelphia, PA, USA, where she is part of Cruiserweight Champion of the World Steve ‘USS’ Cunningham’s professional boxing team, and noticed that the only type of Boxing fitness programmes being offered to women in London were of the aerobic ‘Boxercise’ type.
The Boxing Fitness classes Marianne created, are far removed from the aerobic ‘Boxercise’ classes offered by most fitness centres and personal trainers. These classes are the real deal and include many of the conditioning exercises and boxing drills she personally uses in her own, and athlete clients, competition preparations.
Taking a little time out from her personal training regime Marianne said. “The recent announcement that Women’s Boxing will be included in the London 2012 Olympics has led to a substantial increase in the number of females actively participating in the sport. It is estimated that there are now in excess of 700 amateur, in addition to the 16 currently licensed professional, female boxers.
It has also led to an increased interest, by women, in boxing as a fitness exercise. I’m not just talking about the highly popular ‘Boxercise’ programmes, I mean actual boxing.
The classes I’ve created are 100% pure boxing skills and professional athlete level conditioning drills. Each class includes many elements of the regimes I have been put through when being coached in Philadelphia; Firstly, by Joe and Marvis Frazier and more recently with Nazeem Richardson, Shar’ron Baker and Steve Cunningham. 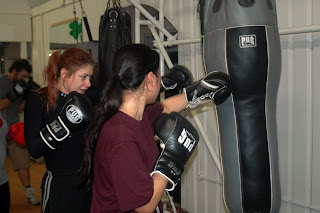 The benefits of real Boxing routines, over ‘Boxercise’ and other aerobic exercise, is that they are over 60% anaerobic, which is far more effective for both weight loss and body toning. Other benefits are increased cardiovascular function and muscle mass as well as improved strength, power and speed.”
Women’s Boxing Classes by Marianne ‘Golden Girl’ Marston take place at The Boxing Clinic, 29 St Albans Place, Islington, London N1 0NX, on Tuesday and Thursday evening at 6.30pm and from Monday 19th April at The Tokei Gym, 28 Magdalen Street, Southwark, London SE1 2EN on Monday and Wednesday evening at 6.00pm.
For further information see www.womensboxingclasses.com
Career Bio of Marianne ‘Golden Girl’ Marston 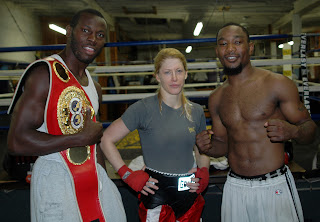 Whilst Boxing may be the sport Marianne is best known for today it is not the only sport she has excelled at. As a youngster Marianne competed both in swimming competitions, as part of the Norwich Penguins, and fencing at County level.
At the tender age of fourteen Marianne, who at the time was seeded sixth (foil), was selected to compete at Crystal Palace for a place in the British Olympic Fencing squad following her victory over the then current number one. (pic right. Marianne with Steve ‘USS’ Cunningham and Jamaal Davis)
Unfortunately Marianne missed this golden opportunity due to a family crisis.
Before the next Olympic trials beckoned Marianne decided that her sporting endeavours would have to take a back seat to academia. Marianne left her family home in Norwich and moved to the capital to study at King’s College London. Her studies paid off with Marianne earning a much deserved B.Sc. (Hons).
Throughout her adulthood Marianne spent many hours per week at the gym keeping fit but it was to be a number of years before she returned to any form of competitive sport.
Her becoming a boxer was quite accidental, as was her studying nutrition. Following a long undiagnosed illness, which turned out to be coeliacs, Marianne returned to her local gym to bring herself back to the levels of fitness she had previously enjoyed. One day at the gym she noticed a poster offering boxing based fitness sessions. Marianne met with the personal trainer, Choleton Senior, advertising the sessions and signed up for the course.
Following the first few sessions Choleton stated that Marianne had what it takes to be a boxer and advised her to find a proper boxing gym. Marianne did indeed find a boxing gym, Gleason’s London, but continued to work with Choleton on her conditioning and additional boxing coaching.
It was around this time that Marianne first started investigating nutrition, specifically to ensure that her diet, which had become restricted due to her being gluten intolerant, still provided all the elements required for her sporting activities.
A few months later, whilst in Philadelphia on business, Marianne accidentally met with Heavyweight Champion of the World Smokin’ Joe Frazier who after discovering she was a boxer invited her to try out at his gym.
Joe was so impressed that he signed her up to his boxing team on the spot and advised her to consider relocating to Philadelphia to prepare for her professional debut.
Late in January 2008 Marianne decided to take Joe’s advice and committed herself to spending six months in America so that Joe and his team could thoroughly prepare her. Unfortunately in March 2008 Smokin’ Joe Frazier’s Gym closed down.
Not being someone to give up on her dreams Marianne went for a trial with Percy (Buster) Custus at the James Shuler Memorial Gym in West Philadelphia. Initially she was taken under the wing of former Light Middleweight World Champion Robert ‘Bam Bam’ Hines but due to her struggling to understand Robert’s instructions, because of his thick regional accent, she started the search for a new coach.
Marianne was due to meet with two time Heavyweight World Champion ‘Terrible’ Tim Witherspoon, with a view to him coaching her, when she was approached by Livvy Cunningham, the wife and manager of Cruiserweight World Champion Steve ‘USS’ Cunningham, to become part of Team ‘USS’ Cunningham.
Firmly now part of Team ‘USS’ Cunningham Marianne was introduced to Shar’ron Baker, who was to be her day to day coach, and ‘Trainer of the Year’ Nazeem Richardson, who had just become Steve’s fight trainer.
Nazeem introduced Marianne to his ‘Concrete Jungle’ conditioning routines – the very same routines that he uses when preparing his famous charges Bernard ‘The Executioner’ Hopkins, ‘Sugar’ Shane Mosley, Steve ‘USS’ Cunningham etc. for Championship fights – which became the basis of her personal training routine, and now part of her conditioning routine for clients.
In January 2009 Marianne signed a twelve fight professional contract with Bionic Bull Promotions.
In February 2009 Marianne returned to the UK, to obtain the visa required to compete in America, and Gleason’s Boxing Gym, London where she was seen by former Olympic coach Terry Edwards MBE. Terry was so impressed with Marianne that he asked if he could work with her.
In May 2009 Gleason’s Gym closed. John Rooney Jnr, who managed Gleason’s, took over the facility and launched Rooney’s Boxing Gym on 1st June 2009.
In September 2009 Marianne created a ladies only boxing class at Rooney’s Gym, the success of the classes was immediate and within a month was increased to four classes per week.
Marianne, who already receives high levels of media interest for her boxing, started to receive press enquiries regarding her considerable coaching skills, and her women only classes. In January 2010 alone Marianne and her ladies class were featured in The Sunday Telegraph’s Stella Magazine – Health and Fitness special – and received the accolade of being named as one of the top five personal trainers in London by Time Out Magazine (London’s Best Personal Trainers feature).
In March 2010, just after the classes were increased to five days a week to include a class for the intermediate and experienced John Rooney decided to take the classes in house.
In April 2010, Marianne approached The Boxing Clinic with the view to offering women only classes at their gym in Islington, London N1. The Boxing Clinic’s Director, Graham Boylan welcomed Marianne with open arms and immediately offered her slots on Tuesday and Thursday evenings. A few days later Tokei Gym, in Southwark, South East London offered Marianne a 6pm slot on Monday and Wednesday.
Also in April 2010, Marianne’s classes were also positively reviewed by Holland & Barratts Healthy Magazine,
Marianne ‘Golden Girl’ Marston and Angel ‘The Artist’ McKenzie sparring at
Rooney’s Boxing Gym In London in preparation for both their upcoming fights.