British BoxersJune 15, 2010
LATEST BOXING NEWS0 Comments17 min read
“I always used to stay up an watch the boxing with my gran when I was a kid.” Craig Watson
Manchester’s current Commonwealth light-middleweight champion Craig Watson will be dropping down to his natural welterweight division on the 16th July when he is lined up to fight in an eliminator for the British title at the Bolton arena.
Watson’s career has been some-what of an up and downer since he turned pro in 2005, with the tag has the man who had decked Amir Khan in the amateurs in an English championship qualifying tournament, Khan went on to win on points. But afterwards Watson maintained that Khan had been down for longer than the ten second count and feels he was ‘ripped off’ in that fight.
Craig Watson floors future world champion Amir Khan in the amateurs
After winning his first 7 professional fights, in his 8th he came unstuck against John Fewkes in what was a close fought 75-77 decision in February 2007.
He bounced back from that disappointment to go on to claim the Commonwealth welterweight crown stopping Ali Nuumbembe later that same year which at the time was considered an upset.
The Manchester southpaw was then given a surprise shot at the vacant European belt against the unbeaten and impressive Italian Daniele Petrucci in Italy, unfortunately that night was an off one and Watson was knocked down twice before being stopped in round three. He just wasn’t in shape for that fight and admitted afterwards that he took the fight because he was skint at the time.
Just two months later Watson was offered a chance to defend his Commonwealth title against Matthew Hatton on one of the biggest bills in recent years which was to be the Ricky Hatton’s homecoming show against Juan Lazcano at The City of Manchester stadium.
That night Watson boxed the younger Hatton’s ears off regaining his title running out a comfortable unanimous decision with winning scores of 116-112 117-112 118-111.
Craig Watson vs Matthew Hatton
Watson didn’t fight then for nearly a year before coming up against John O Donnell in April 2009. Watson lost his Commonwealth welterweight title that night when the challenger won a split decision after a scintillating fight at York Hall that saw the pair trade blows right up to the final bell. Watson felt he had won the fight, and the judges scores reflected how close the contest had been. Judge John Keane had Watson in front 116-113, while Judges James Davies and Dave Parris both had it 115-114 for O’Donnell. It was a fantastic display of boxing and Watson was unlucky to lose his title.
With two more fights that year against Matt Scriven and Riad Menasria, Watson started 2010 with a KO victory against Welshman Barrie Jones. Revitalised and on a winning streak Watson had a surprise last minute opportunity come his way, when he was asked to step in as a last minute replacement for the vacant Commonwealth light-middleweight title.

The title had been vacated by Anthony Small in order to focus on his European title ambitions.Thomas McDonagh and Gary Woolcombe were initially posed to fight for the vacant title. Then Woolcombe suffered a hand injury and pulled out of the fight scheduled for the 16th April 2010.

Ugandan Badru Lusambya accepted to step in on short notice to face McDonagh. However, McDonagh declined to accept him as an opponent and pulled out of the fight. Watson was then drafted in by the promoter and went on to win the vacant title.
Watson floored Lusambya four times, courtesy of some great left hooks – before the contest was halted at 2:01 of the second round after the fourth decking of the African, the Manchester boxer was now a two time, two weight Commonwealth champion.
Craig Watson vs Badru Lusambya – Commonwealth light-middleweight title
So it is now back down to welterweight for next months British title eliminator and a chance to get a fight for the Lonsdale belt. Going to press it looks like the fight will be against Mark Lloyd.
The British welterweight division is in a good state of health at the moment and this year should see it take shape, with Watson pushing for title chances, he finds himself in a division with friend Michael Jennings, star turn Kell Brooke and old foes John O Donnell and Matthew Hatton.
British Boxers caught up with Craig this week for our in the ring with series.
‘In the Ring with’ Craig Watson 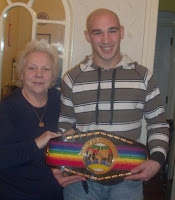 Craig When and how did you get into boxing?

I always used to stay up an watch the boxing with my gran when I was a kid an really loved it from an young age an when i was about 11, I seen a boxing gym in newton heath an was glued to it ever since
Who was your first trainer?
Terry Barlow at Newton Heath ABC along side Wayne Pinder
How would you describe your fight style?
An all rounder I can box an if you wanna have a fight I’ll be right there with ya
Who influenced you as a young boxer?
My family they live the fact that I’m doing something with my life an I wanna do them proud
Toughest/Best opponent you have faced?
Barrie Jones I just found him very awkward but i got to him in the 3rd an 4th
Toughest Part of being a boxer?
Dieting I hate it but that is just part of being a boxer
Who do you wish you had fought or want to fight?
I would like to turn all 3 losses round John Fewkes I boxed him when I was young an stupid now i would like to really have a real fight with him an John O Donnell, cos he never beat me in the fight we had!
Best fight you have seen?
Jamie Moore vs Matthew Macklin – I boxed just before them an KO’d a lad in the first round so I warmed the crowd up for them ha!
Best fight Ive seen Jamie Moore vs Matthew Macklin

Dream Fight? Who v Who?

Mayweather vs PacMan – and I would pick Pac man to win!
Childhood Hero?
Didn’t have one
Favorite all time boxer, World and British?
Ricky Hatton British and Pac man world, he is doing so much an he isn’t even finished yet
Favourite British fighter at the moment?
David Haye fast exciting to watch and a real nice bloke

What do you do when you are not Boxing?

I am always in the gym I sometimes go away for a week on holiday after a fight (pic right)
What would you do if you wasn’t a boxer?
A steel fixer that is what i did before
Which British Boxers should we look out for?
Mikey McDonnell an Tommy Stubbs – 2 very good fighters from my gym that will go along way
Your Motivation?
To do well for myself an live a clean living
What would you change in Boxing?
Just one or 2 things in British boxing . there are people like myself who deserve an big shot at something like the British title an I’ve never been given a shot but u see other fighter fight people I’ve beat going onto fight for the British title? its just crackers but that’s life!
What music do you listen too?
I love Stevie Wonder and Ray Charles (pictured right) anything or Motown really I’m just so chilled out
Last book you read?
Boxing News I’m not really one for reading books
Favorite films?
A Bronx tale. an once upon a in America

Ha! Vin Diesel he is cool like me ha! (pic right)

Favorite Meal?
Steak and Chips with a nice bit of scampi ha!
Best Holiday destination?
Egypt
What other sports do you watch?
Nothing really
Best friends in Boxing?
Micheal Brodie, Wayne Pinder, Anthony Crolla, Darren Askew are just some of them but there are loads more, Manchester is the fighting capital of Britain.

Gordon Ramsey for the cooking, the local builder to build me a house of some sort, and my girlfriend ha!
Tell us something we don’t know about you?
I didn’t have my first fight till i was 18
Who is the greatest British Boxer of all time?
It’s got to be Ricky Hatton the way he could pull a crowd in like he did was awesome
Quick Fire Questions:

City? Got to be Manchester
Drink? tea 2 sugars
Animal? Dog
Website? Facebook
One thing you cant live without?
My phone ha!
Favourite Quote?
Train hard fight easy
What does the future hold for you?
I’m not sure? I don’t ask for too much, but now I’m Commonwealth champ I see myself getting past this level and moving on to either British or European titles.
Thank you Craig for talking with British Boxers, we wish you luck in your next fight, catch up soon.
Interview by Chris Maylett for www.britishboxers.co.uk