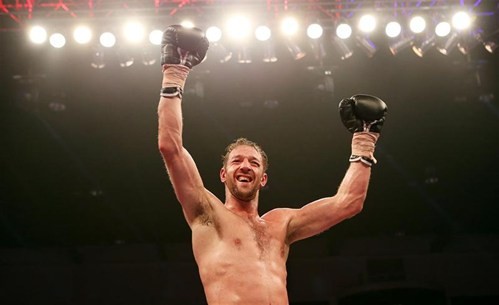 Enzo Maccarinelli speaks to BoxNation’s Steve Lillis as he arrives in Rostok before his WBA World Light-Heavyweight title fight with Juergen Braehmer on Saturday. A fight you can see live on BoxNation.

Maccarinelli challenges WBA light-heavyweight champion Braehmer this weekend aiming to complete one of the fight game’s greatest ever comebacks.

The odds are stacked against the Swansea puncher when he challenges local hero Braehmer in Rostock on Germany’s Baltic Coast.

Even getting the opportunity to become a two-weight world champion just two years after many pundits including his promoter Frank Warren urged him to think about retirement is remarkable.

Maccarinelli has won 38 of his 44 contests, but all six stoppage defeats have come inside the distance leaving plenty of people fearing for his future.

Three impressive wins last year put him back in world title contention and the Commonwealth champion earned his crack at Braehmer, a fight that can be seen live on BoxNation.

Maccarinelli, 33, said: “When I become world champion I like to think it would be a career turnaround where people say, ‘wow’, but it doesn’t bother me.

“I have been written off so many times. I went over to Russia and challenged Alexander Kotlobay for the European title. I said I would knock him out in a round and got the job done in two minutes.” Maccarinelli told Lillis for BoxNation.

“When my mind is right I am a dangerous person, but there is only a handful of times when I have been spot on.”

Maccarinelli proved himself at world level in 2006 when he became WBO cruiserweight champion, but in March 2008 lost in two rounds against David Haye.

Southpaw Braehmer, 35, is enjoying his second world championship reign and despite legal problems away from boxing has fought at top level for eight years.

During his amateur days in the 1990s he was also top drawer. He twice beat Ricky Hatton in 1996 including a first round KO and two years later outpointed Carl Froch.

Maccarinelli insists there will be no more Brit bashing, warning: “I know it’s horrible, but I aim to go in there and hurt people.