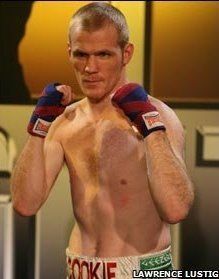 In the Ring Interview with Jason Cook

Jason Cook is the former European and IBO lightweight champion, who as an amateur won a Silver medal for Wales at the 1994 Commonwealth Games in Canada.

With a record of 31 fights, 27 wins, 14 by KO, with just 3 losses and one draw, the draw coming against British champion Lenny Daws in a tight contest which went down to the wire. Cook 35, hopes to get a return fight with Daws should he upset the apple cart and defeat former amateur star and hot British prospect Gavin.

Nicknamed “The Power” Cook had a total of 86 amateur contests, winning 66, before turning professional in October 1996, with a second-round stoppage of Brian Robb.
After winning his next four bouts, Cook suffered a setback with a first-round knockout defeat at the hands of Trevor Smith. After the bout, Cook said “He clipped me with an overhand left and though I got up at six or seven, I was in no state to continue; the referee did the right thing.”
After a nine-month lay-off, Cook returned to the ring to defeat Darren Woodley via a fourth-round knockout. Victories over journeymen David Hinds and Peter Buckley led to Cook receiving a shot at the vacant Welsh Area light welterweight title.
On 12 December, 1999, Cook won the vacant title with a first-round knockout of Woody Greenaway. Victories over Harry Butler, Andrei Sinepupov, Keith Jones, Assen Vassilev, and Dariusz Snarski followed, before a prison sentence that momentarily ended Cook’s boxing career In 2001 for 15 months.
Cook returned to the ring on 18 March, 2002, with a first-round knockout victory over Albanian Nono Junior. He followed this with point’s victories over Russians Andrey Devyataykin and Viktor Baranov. On 23 July, 2002, following the withdrawal of Bobby Vanzie, Cook was offered the chance to fight Sandro Casamonica in Italy for the vacant European lightweight title.
Cook produced an upset by defeating Casamonica via a third-round knockout. Cook had started well winning the opening two rounds but was floored in the 3rd. As Casamonica moved in to finish the fight, he was hit with a left hook that brought an end the fight.
After the bout a jubilant Cook said “It’s like a dream; my life has changed, it still hasn’t sunk in. That was the best punch I’ve thrown in my life, and it came when I most needed it. I’m ecstatic; I’m walking around on a cloud.”
Cook’s first defence of the title was against Frenchman Nasser Lakrib on 26 October, 2002. Lakrib was stopped in the 5th round, in a fight which was held in Cook’s hometown of Maesteg. Cook’s next defence of the title was against Stefano Zoff, who he went on to defeat via a split point’s decision. Despite the victory, Cook lost his European title before the bout when he failed to make the 135 lb lightweight limit.
On 8 November, 2003, Cook fought Argentinian Ariel Olveira for the vacant IBO lightweight title. Cook defeated Olveira by a 7th-round stoppage, after the Argentine’s cornerman threw in the towel. Cook’s first defence of the title was against reigning commonwealth champion Kevin Bennett on 1 May, 2004. Cook outboxed Bennett to claim a close but unanimous points decision.
On 5 November 2004, Cook was scheduled to face South African Phillip Ndou in defence of his IBO title. However, on 21 October, 2004, Ndou retired suddenly after a brain scan revealed a slight abnormality. Ndou had previously challenged Floyd Mayweather Jr. for the WBC lightweight title.
A disappointed Cook said of the proposed bout “It would have been a great fight, I was thinking it could have been the British version of Hagler-Hearns. I might have had to pick myself off the canvas in that one but I’d have definitely come back and eventually prevailed.”
The late replacement for Ndou was Argentinian Aldo Rios, who went on to stop Cook in the 3rd round. Cook had started the fight well but was floored in the 3rd by a straight right hand, and a follow up attack from Rios forced referee Richard Davies to stop the contest. Following the bout Cook said “I took things a bit easy and got caught cold more than anything…This may have been a step too far, but I’ll be back.” Rios had previously lost to Ricky Hatton by knockout in a challenge for the WBU light welterweight title.
On 25 November, 2005, over a year after his last fight, Cook returned to the ring to face Gary Reid. Cook won the bout via disqualification after he was hit with a low blow and could not continue In September, 2006, after pulling out of a fight with Giuseppe Lauri for the vacant European light welterweight title, Cook announced his retirement from boxing.
On his decision Cook said “It’s time for me to go now. I’ve had so much trouble with the shoulder over the years and tendinitis in an ankle which flares up when I do roadwork that I can’t carry on at the top level. If I was going to fight four, or six-rounders, it might be OK, but life as a journeyman is not for me.

Then on the 4th September 2009 after a four year layoff, Cook made his comeback to the ring against Scott Jordan, finishing the fight in the fourth round with a devastating trade mark left hook.

Then just three months later in December, Cook was offered a chance to enter Sky Sports Prizefighter series in the light-welterweight division, Cook jumped at the chance.
Cook won his first round fight against Michael Grant, as the referee decided to stop the contest on the Doctors orders after Grant suffered a nasty cut. In the Semi-Final stage, Cook was matched with fellow Welsh boxer and former WBA world light-welterweight champion Gavin Rees but lost by a unanimous points decision, with Rees declaring that he was expecting the Final fight against Colin Lynes to be an easier fight than his Semi-Final against Cook. The brave comeback performance by Cook earned him a shot at the British Light-Welterweight Title against Lenny Daws.

Jason Cook challenged Lenny Dawes for the British Light-Welterweight Title on the 12th of February 2010 at York Hall, Bethnal Green in London. From the opening bell, Cook looked comfortable and slick and dominated the early rounds.
The early rounds were shaded by Cook before Daws upped the pace from the seventh, also rocking him in the 10th.
Two judges awarded it 115-114 to either man with the other scoring it 114-114.
It looked as if an upset might be on the cards with Cook starting the fight in blistering fashion.
He hurt Daws early in the first, rocked him again in the second and while the Londoner came back into the fight in the third, Cook was dominant in the early rounds.
But a good seventh from Daws saw him take control and as Cook tired, he tightened his grip.
A big right in the tenth almost sent Cook to the canvas and the final two rounds saw the Welshman hold on.
The bout was declared a draw and Dawes regained his title. The gutsy performance by Cook moved him up the European and Commonwealth Light-Welterweight rankings and he hopes to get a shot at either title and a Lenny Daws rematch for the British title well in his sights.
British Boxers caught up with Jason Cook for our ‘In The Ring with Series’

Hi Jason, When and how did you get into boxing?
In 1986 my brother was doing it.
Who was your first trainer?
Bryan Evans Maesteg ABC
How would you describe your fight style?
Strong and aggressive but able 2 box when needed to.
Who influenced you as a young boxer?
My brother Chris
Toughest/Best opponent you have faced?
Toughest were Stefano Zoff and Gavin Rees..Casamonica was supposed 2 have been the best but I poleaxed him.
Toughest Part of being a boxer?
Discipline
Who do you wish you had fought or want to fight?
Bobby Vanzie and Graham Earl when i was European champ….I also would like a return with Lenny Daws
Best fight you have seen?
Nigel Benn vs Gerald McClellan
Dream Fight? Who v Who?
Me against Mayweather when I was at my peak 2002-2003……

Bryan Robson and Mark Hughes…I was more of a football fanatic when I was younger
Favorite all time boxer, World and British?
Sugar Ray Leonard, Nigel Benn
Favourite British fighter at the moment?
Nathan Cleverly
What do you do when you are not Boxing?
Work nights at Asda
What would you do if you wasn’t a boxer?
As above
Which British Boxers should we look out for?

Your Motivation?
My kids and my gorgeous girlfriend
What would you change in Boxing?
Some referees
What music do you listen too?
Anything really
Last book you read?
Ricky Hatton`s
Favorite films?
Grease, Dirty Dancing, all the Rocky`s and all comedies

Vinnie Jones
Favorite Meal?
Chicken and Mashed Potato
Best Holiday destination?
Florida
What other sports do you watch?
Nearly all of them mainly football,darts + cricket
Best friends in Boxing?
Darren Wilson (trainer) and all who have supported me…all us boxers get on well with each other as it`s a close fraternity.

Hannah Aston (my girlfriend) Sandra Bullock and Jenna Jameson….it could get wild!
Tell us something we don’t know about you?
Shy Sensitive and I adore my kids
Who is the greatest British Boxer of all time?
Joe Calzaghe
Quick Fire Questions:
Red or Blue? Red