British BoxersJuly 16, 2010
LATEST BOXING NEWS0 Comments3 min read
Former Undisputed World Heavyweight Champion “Iron” Mike Tyson has been in the UK all this week on a promotional tour of Britain. 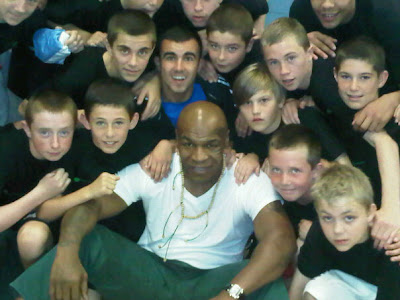 The “Baddest man on the Planet” visited a pigeon breeder in Llandudno, Wales on Tuesday and spent a couple of hours admiring the racing pigeon’s in Darren Peters farm.
Mr Peter’s received a call last week from Tyson’s promotional company and was only too happy to invite the Boxing legend to visit.
“With him (Tyson) being a legend and following his career it was hard to believe,” Mr Peters said.
“It was a big buzz and to be honest he thanked me. He didn’t want to go, he loved every minute of it. He said he’d like to come back again.
“He talked and asked lots of questions… he was really keen. It was a day to remember.”
Tyson then travelled up to Peterborough on Wednesday to watch the football match between Peterborough United and West Ham United.
The 44 year-old former boxer was paraded on the pitch before the game wearing a Peterborough United shirt with “Tyson 1”
On the back before sitting amongst the crowd and taking in the game, which West Ham won 2-1.
On Friday, Tyson visited Liverpool and met up with local boxers Derry Mathews and Paul Edwards, who were training youngster’s at Croxteth Sports Centre.
He spent almost an hour answering questions and giving some well educated boxing advice to some of Derry’s academy trainee’s.
The former champ is in the UK for “An Evening with the Baddest Man on the Planet” which took place last night.
He was joined by Journalist Steve Bunce and a host of other boxers, past and present for the evening.

Mike Tyson ‘Haye Should Avoid Klitschko’s – He is a good fighter but he needs to establish himself as a champion” – VIDEO: Interview with Iron Mike.