Martin Lindsay has his eye on two fights in the next few days, but will only be landing his bombs in one of them.
.
The British featherweight champion (16-0) faces Kenyan southpaw David Kiilu (33-10-2) in a non-title eight rounder at Rainton Meadows Arena, Houghton-le-Spring on Saturday 11th September.
.
He also has one eye on this Saturday’s Commonwealth championship clash between John Simpson and Stephen Smith – where the winner will become his mandatory challenger.
.
Lindsay, 28, said: “Simpson v Smith is a very hard fight to call, but I couldn’t care less which one I defend my British title against.
.
.

“I just hope there is someone who has the bottle to share a ring with me for my British crown.

“Kiilu looks a good opponent and has more experience than anybody I have ever faced and even won a title at lightweight.”
.
Promoter Frank Maloney added: “It is such a headache getting Martin matched up because nobody wants to face him.
.
“Ideally, I would have liked next week’s bout to be a British title defence but nobody wanted to know, although I am sure Simpson or Smith will be keen.”
.
Lindsay won the British title when he last boxed in March with a convincing points win over Jamie Arthur.
. 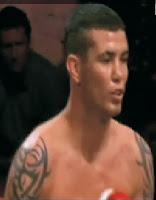 Travis Dickenson wants to sock it to George Groves by scoring a hat-trick against the Commonwealth super-middleweight champion.
.

The unbeaten Durham fighter beat Groves twice as an amateur, including a Junior ABA final win by first round KO.
.
Dickinson (6-0) is making great progress as a professional and boxes at Houghton-le-Spring’s Rainton Meadows Arena on Saturday September 11 when he faces Welsh champion Shon Davies (7-6)
,
The six-rounder takes place on the undercard of Jason Booth’s challenge for Steve Molitor’s IBF super-bantamweight title.
.
Dickinson, 22, has already mixed in good company and defeated recent Prizefighter winner Patrick Mendys on his debut in March 2009.
.
He said: “My first aim is a British title and of course another clash against George would be fantastic. He is really going well.”
.
Travis vividly remembers his 2006 KO of Groves adding: “I can hit with both hands; I dropped him with the right and then when he got up I finished him with the left hook. His legs were all over the place from the first knockdown.
.
“He wasn’t the most skilful, but he was always strong for his age.”
.
Travis Dickinson in action against Hastings Rasani
Promoter Frank Maloney believes a Groves showdown will take place next year and added: “I have a working relationship with Groves’s manager Adam Booth and next year I don’t think it will be hard to make.
“It would be a brutal battle, both of them storm forward and give it their all. Fans and TV viewers will love it.”
In the chief supporting bout to Molitor-Booth, British featherweight champion Martin Lindsay (16-0) boxes a non-title bout.
Other stars in action include Olympic bronze medallist Tony Jeffries (7-0-1), Travis’s older brother Jon Lewis Dickinson (8-1), Trevor Crewe (2-2), Gary Fox (2-0), Kirk Goodings (4-0), Martin Ward (8-0), George Watson (8-1-2), and debutant Glen Foot.