Frederick Percival Mills born in Bourmouth and had his first boxing match on 26th February 1936 at the local ice rink aged 16, winning via a first round knockout. He began fighting in fairground booths and at venues on the south coast of England. He was 5 ft 10½ in and did not have a sophisticated boxing style. However he relied on two-fisted aggression, relentless pressure, and the ability to take punishment to carry him through, and in more cases than not these attributes were sufficient.


Mills excelled as a light-heavyweight, but occasionally fought as a heavyweight. Although he sometimes won at the heavier weight, he always struggled against the big men and took a lot of punishment.
His first 64 fights, in 3½ years, against minor light-heavyweights resulted in 48 wins, 9 losses and 7 draws.

The fight against McAvoy took place in Liverpool in August 1940 and Mills won a clear decision over ten rounds.

During the rest of 1940 and 1941, Mills continued to fight. In December 1941, he fought Jack London, a heavyweight who was later (in 1944) to win the British and Commonwealth heavyweight titles – Mills won on points over ten rounds.

On 26 July 1948, Mills was matched against Gus Lesnevich for his second attempt at the world light-heavyweight title. Mills was in much better shape for this fight, held at the White City Stadium, London.

The fight lasted fifteen rounds and Mills boxed well, putting Lesnevich down twice, securing a points decision and the world title. Later, the sounds from Lesnevich’s camp and the American press seemed to be indicating that Lesnevich’s defeat was down to his continual problems to reach the Light Heavyweight limit of 175 pounds.

However, while his difficulties in making weight were undeniable (Lesnevich regularly fought around the 180 pound mark taking on good fighters such as Tami Mauriello, Jimmy Bivins and later Ezzard Charles) his defeat was largely brought about by the cuts over both of his eyes, which had streamed with blood from the opening round.

In June 1949, Mills again stepped up to heavyweight, when he challenged Bruce Woodcock for his British, Commonwealth and European heavyweight titles. They fought at the White City Stadium, and Mills showed his usual courage but was knocked out in the fourteenth round.

Mills had dominated the fight for the first three rounds but Maxim began to overhaul him in the following rounds, until in the tenth he caught Mills with a flurry of head punches and won by a knockout.

Mills’s reign as world champion was over, and a few weeks later he announced his retirement.

On 30 September 1948, Mills married Marie McCorkindale, the daughter of his manager, Ted Broadribb. She had previously married another boxer Donald McCorkindale and had a son by him.

Mills and his wife went on to have two daughters. He was living on Denmark Hill in South London until his death.

On retiring, he used his popularity to keep himself in the public eye, making walk-on appearances in various films and became a presenter on the BBC pop-music programme, Six-Five Special. He also became owner of a restaurant in Soho, which later became a nightclub.

He became friends with the Kray brothers, (below left) notorious London gangsters who frequented his club. During the latter stages of his boxing career, Mills suffered from frequent headaches, which continued after his retirement.

After its initial success his nightclub began to fail and he tried to sell it, without success. He sold off what property he had but was in serious financial difficulty.

On 24 July 1965 he was found shot in the head in his car, parked in a cul-de-sac behind his nightclub. He died later in the Middlesex Hospital.

He had told the nightclub staff that he was going for a nap in his car, something that he often did. A week or two previously he had borrowed a rifle from a friend who ran a shooting gallery.

Although the rifle was not in working order when borrowed, it had apparently been repaired and was found in the car alongside him. 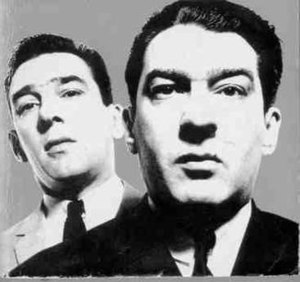 The coroner’s inquest heard that the angle of the bullet was consistent with a self-inflicted wound, and the inquest ruled that he had committed suicide.

Mills was buried in New Camberwell Cemetery. Among the pallbearers were Jack Solomons, the boxing promoter and Henry Cooper, British heavyweight champion.

His grave has a marble boxing glove on it, beneath which is an urn containing a real boxing glove.

Rumours have always been rife as to the mystery surrounding Mill’s death and some have even suggested it was the Kray twins who were responsible for it or that his suicide was staged by the Triads, Chinese gangsters who were after his nightclub.

The life of Freddie Mills ended as dramatically as his life and boxing career had been. Please watch the video documentary above ‘Freddie Mills a Life Story’

– How boxing champion was driven to suicide by threat from Krays