Can Harrison win? or will Haye retain in 3D knockout prediction 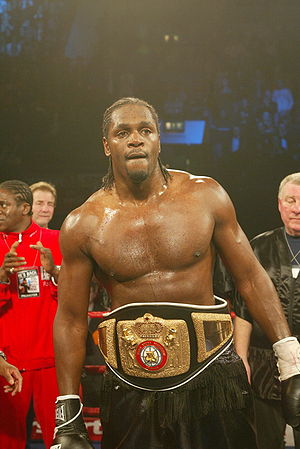 What started out as a forgone conclusion in most fans opinion, is now becoming a little bit confusing if not intriguing?
.
When David Haye announced that he would make the second defence of his WBA heavyweight title against Audley Harrison, everyone thought that Haye was picking the easy option and was ducking a fight with the Klitschko brothers.
.
But in a fight that has been covered by the media more so than many fights do these days ,and the realisation that maybe Harrison really does have a chance! Are people beginning to believe that Audley Harrison does have a genuine hope of causing a Hugh upset? or will all the Harrison hype be just a protective smoke screen that will be hurtfully exposed by Haye.
.
In the final week countdown of the heavyweight battle of Britain, when on Saturday night the MEN arena in Manchester City Centre will host the grudge match ‘Best of Enemies’ for the world heavyweight crown, between the former friend’s, team mates and room mates, but fell out with each other over a sparring session that Haye went over board in and then Harrison claims Haye snubbed him from fighting on a Hayemaker promotion, an ego clash also seems to have got in the way of things by the look of it!
.

The fight has really captured the public’s imagination, and breathed life into not only main stream British boxing, but the heavyweight division seems to have been switched on again, and as fight time approaches, Audley is starting to get the pundits, fans and the boxing fraternity scratching their heads and asking themselves the question, “Can Audley win this?
.
Harrison an Olympic Gold medalist, but professional underachiever, seems to have found a new confidence and belief in himself, Haye calls his confidence, delusion, and questioned Harrisons mind when he quirked this week, “He really believes he is going to win.”
.
Harrison and Haye have got the boxing juices flowing in the build up to the fight with their jibes and war of words and SkySports have been giving us a great insight into the two camps and updates on how the two have been preparing for the clash.
.
Harrison as certainly talked a good fight leading up to what he sees as his destiny and his realisation of a dream, that the laws of the universe has bestowed on him, and believes such is his strength of his mind and will to succeed in becoming heavyweight champion of the world.
.
“It’s my big night and I’m really looking forward to Saturday night,” he said.
.
“The Audley Harrison that won the Olympics and beat Danny Williams in our second fight will destroy David Haye. It’s going to be a tough fight but ultimately I will prevail, it is my destiny.
.
“I’ve fallen in the past but never given up and Saturday night will be my crowning glory when Audley Harrison becomes heavyweight champion of the world.” said Harrison at todays press conference.
.
Haye, who arrived in Manchester yesterday by helicopter, is a fighter who seems to have improved since becoming heavyweight champion, he looks fitter, healthier even quicker than he was has a cruiserweight, he says he has trained like never before for this fight with Harrison.
.
Not having to make the weight anymore seems to have boosted Haye in every area and with his bulging cut physic, good looks and charisma, he looks like a heavyweight champion out of the comic books, ‘David who slayed the giant’ was a story a couple of issues back, and he has managed to put some much needed sparkle back into a heavyweight division that has been on its arse for a few years.
.
Mike Tyson, Lennox Lewis and Frank Bruno have all given Harrison a punchers chance of causing an upset, but Haye speaking to SkySports today said that he ticks every box in every department and that he will leave Harrison unconscious on the canvas and regain his title.
.
“For the last ten years Audleys been banging on and on and on about he’s going to be the heavyweight champion of the world, and this is it this is his chance, unfortunately for him, he’s got to fight me.” Haye said.
.
“We got good quality sparring partners in, we drilled day in and day out what needs to be done, and come fight night its going to look like all my fights have been against southpaws, because I’m going to really negate all of his efforts and I’m going to leave him unconscious on the canvas.”
.
“What I feel is goner lose Audley Harrison the fight, is the fact that it’s Audley Harrison, that’s it! I believe I’m a better athlete, a better boxer, I’ve got more heart, more grit, determination, speed, stamina, I think every box I tick, way above what he can.”
.
At todays press conference Haye said. “Get your 3D glasses and watch this beat down in the 3rd dimention.”
,
We cant wait! prediction Haye in round 5.
.
By Chris Maylett

Build up to the Fight by SkySports