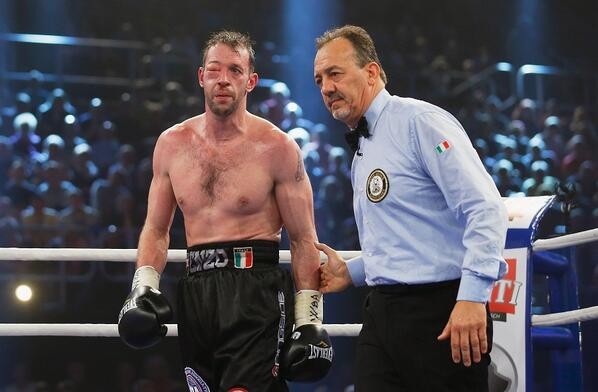 ‘Big Mac’ was certainly not accompanied by Lady Luck last night in Rostock, Germany as he cruelly saw his dream of obtaining another world title torn away after an ill-fated first round.

Former cruiserweight world champion Enzo Maccarinelli was bidding to become a two-weight world champion in challenging Jurgen Braehmer for his WBA light-heavyweight title. It is no secret that of late Maccarinelli has been riding a career-rollercoaster, with having the worst year of his career in 2012 but bouncing back the following year with three straight TKO victories, including avenging the loss to Ovill McKenzie, to secure the world title challenge.

Braehmer went into the fight as the betting favourite, having only lost twice from 44 professional contests and racking up a run of eleven straight wins since March 2009.

A clash of heads in the first round had inflicted damage onto both fighters with the defending champion cut and bleeding from above his eye, but with accurate left-hand shots he had began to rapidly close Enzo’s right eye. By the end of the first round the swelling was overcoming the Welshman’s eye and cheek and it was apparent that he was already having difficulty seeing out of the right eye.

In the second round Braehmer targeted the area with fast shots and by this time the only hope ‘Big Mac’ had was a puncher’s chance, given the shots landing that he couldn’t see. At the end of the third round Enzo’s trainer, Gary Lockett, was close to pulling his fighter out but he wanted to give the challenger every chance to achieve his aspiration. Enzo had success in the fourth as he bravely came out on the front-foot to give it all he had, rocking Braehmer with a left hook. By this point the champion was throwing a shot or two and holding, spoiling any chance Maccarinelli had to land a fight-changing bomb. Lockett sent his charge out for one more round on account of the success in the fourth but Enzo’s right side of his face was simply a mess, swelling was rising across his left cheek and he couldn’t deal with Braehmer’s hit-and-hold spoiling tactics.

At the end of the fifth round, Lockett began tearing off Enzo’s gloves, stating that he couldn’t let him go on with his face like that. Some may be inclined to criticise Lockett for not pulling him out sooner but the ringside doctor had twice examined Maccarinelli’s face upon the referee’s request and allowed the fight to continue.

The defeat was the seventh of his career but absolutely no way should ‘Big Mac’ be automatically dismissed based upon last night’s performance; he was extremely unlucky to have sustained such a horrific injury so early in the fight and, I am not saying that he would have definitely won, but with two eyes the fight would certainly have been far more competitive.

That last point said it truly was a difficult affair to watch and I cannot personally remember the last time when I so badly wanted a boxer to find one clean punch that would finish the fight. Both Lockett and Maccarinelli were extremely humble in speaking after the contest; the trainer stating how he wanted to give the challenger every chance possible before halting the fight and ‘Big Mac’ showing nothing but respect for the champion.

All I can say is heal up, champ; we look forward to seeing you back in the ring soon.