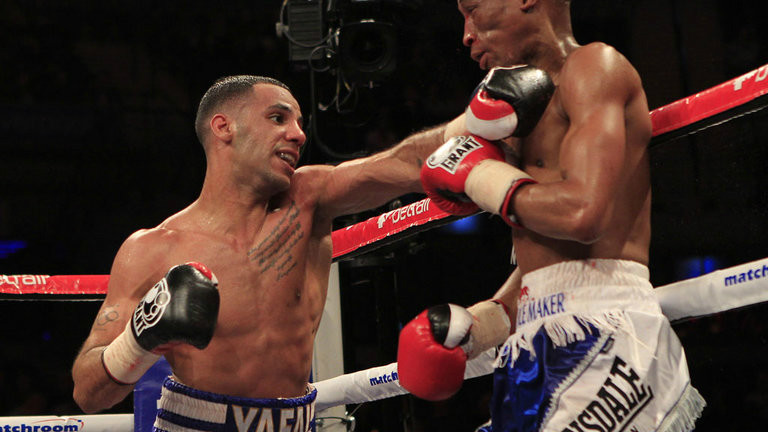 Kal Yafai will defend his WBA World Super-Flyweight title against Suguru Muranaka at the Barclaycard Arena on May 13, live on Sky Sports – where Sam Eggington also challenges Cerefino Rodriguez for the European Welterweight title on a stacked bill.

Yafai became Birmingham’s first World champion when he landed the crown with a clinical showing against Luis Concepcion in Manchester in December.

The unbeaten 27 year old will defend on home soil against Japan’s Muranaka, the 32 year old former Japanese Flyweight champion who boxes outside of Tokyo for the first time in his 13 year career.

Yafai extended his unbeaten record in the pro game to 21-0 when he landed the title – but now believes he’s starting a new career as a World champion, with a target on his back from his first defence as he targets unification bouts down the line.

“It’s a tough first defence and that’s what I need,” said Yafai. “I want hard fights that are going to help me when I face unification fights.

“This is what I started boxing for. I wanted massive nights in Birmingham and it doesn’t get better for me. It’s been amazing since winning the title. Every time I’m walking around the city I get stopped for photos and for autographs – but I know that it’s harder to keep a title than it is to win it, so the real work is only just beginning.”

Chief support comes from Eggington’s European title crack at Rodriguez, the Spaniard that landed the vacant title in December. Eggington is full of confidence heading into the bout having stopped former two-weight World champion Paulie Malignaggi at The O2, and the hard-hitting 23 year old wants to build on his wins over Malignaggi and Frankie Gavin with another prize scalp.

“I have real hunger back after losing to Bradley Skeete and this is massive for me as I never thought I’d reach this level,” said Eggington.

“I had to learn a lot after Skeete. I have grown up and come back strong with wins over Frankie and Paulie. If I can add a win over Rodriguez to those two names and then defend the title well, people will start talking about World titles and I think that I’ve earned the right to be in the conversation for them.”

Gavin returns to action following his fight of the year battle with Eggington and ‘Funtime’ is taking the first steps to move down to fight at Super-Lightweight by taking on Derby’s Dave Ryan in a crunch clash made at 145lbs, while Yafai’s younger brother Gamal takes on WBC International Super-Bantamweight champion Sean Davis.

Tickets are priced £40, £60 and £100 with VIP tickets priced £200. Tickets are on sale now to Matchroom Fight Pass members via this link: www.stubhub.co.uk

Face value tickets for May 13 are also be available from www.stubhub.co.uk StubHub is the official ticket partner and marketplace of Matchroom Boxing and Anthony Joshua.