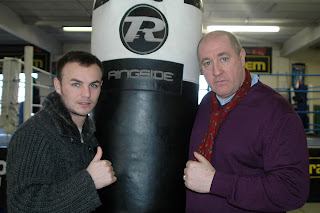 This coming Thursday’s edition of The Steve Bunce Boxing Hour – BBC Radio London 94.9 between 8-9pm on Thursday 10th February 2011 – features part II of the Jimmy Tibbs interview which covers his life as a trainer at the Royal Oak.
Jimmy also talks abou Nigel Benn and Michael Watson as well as some of his current charges Kevin Mitchell and Billy Joe Saunders, who he trains at the Ultrachem TKO Gym in Canning Town.
Steve will also be airing an interview, he undertook last week when visiting Johnny Eames’ TKO gym, with Kevin Mitchell on that night at Upton Park and his future.
Joining Steve live in the studio will be rising Light Welterweight prospect Chris ‘The Flash’ Evangelou, who will be talking about his career to date as well as his upcoming bout on the undercard of the Hennessy Sports promoted John O’Donnell – Craig Watson British Welterweight title clash at Wembley Arena on February 19th.
Also joining Steve live on the phone, from New York, will be legendary boxing writer and historian Bert Randolph Sugar who will be talking about his latest book.
Plus more guests live on the phones.
Steve Bunce’s Boxing Hour goes out on BBC Radio London every Thursday
between 8-9pm on BBC London 94.9, online live on BBC iPlayer.
Steve’s exciting thriller ‘The Fixer’ has recently been reprinted and is
available now on-line at Amazon.com and all good bookshops, RRP. £9.99.
pic: Steve Bunce and Kevin MItchell at the Ultrachem TKO Gym in London Gianluca (Rio) Di Caro