British BoxersApril 14, 2011
LATEST BOXING NEWS0 Comments5 min read
Over the years British boxers have left these septic isles to cross the big pond and seek out the toughest gyms and the best trainers in the downtown back streets of New York to Philadelphia the Kronk gym to Wildcard in LA.
UK fighters have always been encouraged to get themselves over to the states, the Mecca and the birth place to the some of the finest pugilists of all time. Brits have packed there gloves and gum shields in search of the best sparring the winning formula and proverbial ‘eye of the tiger’.
There are not many US boxers who make the same switch and come to the UK to make the pilgrimage to the spiritual home of boxing with the intentions of furthering there career and seeking the tutorledge of a British coach and Limey gyms.
But one such man has recently made that trans-Atlantic journey, swapping the sunshine of his home city of Maryland for the rain splattered cobbles of Manchester in the North of England making the alternative switch from the norm.
Tim ‘Pitbull’ Coleman, the number 5, IBF rated light-welterweight in the world has followed his trainer Lee Beard, a former coach of Ricky Hatton to the UK and feels that in doing so he can 100% concentrate on his boxing with no distractions, even splitting with his girlfriend to realise his dream of becoming a world champion under the wing of Beard, who Coleman rates as one of the best boxing trainers in the world.
Coleman used to be a regular sparring partner for Manchester’s most known indigenous  boxer Ricky Hatton, helping the ‘Hitman’ to prepare for some of his big fights. That was when the 26 year old met Hatton’s assistant trainer of the time Lee Beard and then joined him back in Manchester when Beard made his own way in the game.
Coleman has had a few ups and downs in his career, not being able to get the fights he wanted, whilst training and holding down a job to make ends meat. In December 2009 he won the vacant USBA light-welterweight title with a split decision win over former world champion Mike Arnoutis. The win allowed Coleman to break into the world rankings.
After one defence of the title, Coleman with a record of 20-1, 5 KO’s – was offered a IBF world title eliminator fight against Victor Cayo, lined up for April 29th at the Cosmopolitan Resort in Las Vegas, Nevada. With the winner then being lined up to challenge Zab Judah for the legitimate IBF crown.
The Pitbull again has been left disappointed when Cayo was ordered to fight Lamont Peterson instead leaving him now to fight an 8 rounder on the undercard. It is another blow for the American fighter who is determined to make his name in boxing and shake up the sport in the form of his boxing hero Mike Tyson.
“I’m out here working hard, trying to make something happen for my life and I don’t care about anything else. I loved my girlfriend to death but I broke up with her because I felt like she was a distraction. 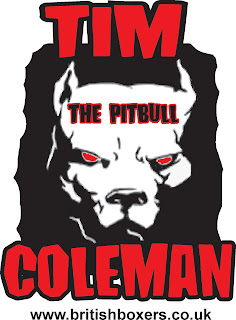 “There’s nothing that means more to me than what I’m doing right now, this is it for me.
“What else do I know what to do? I don’t know how to do anything else, Ive been doing this my whole life and Id be God damned if I’m not going to give it my all and my everything to make something out of myself.” exclaimed Coleman .
In our exclusive video interview with Coleman we get an insight into the trials and tribulations of his boxing career to date, the anger and resentment for the wrongs he feels have been bestowed on him. From being over looked, the politics of the game that have held him back, promoters and friends who have chosen to ignore him and ‘The Pitbull’ pulls no punches in his assessment of.