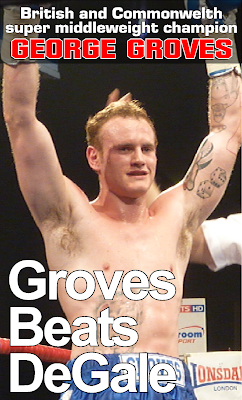 In the first defence of his newly acquired WBO light-heavyweight world title, Nathan Cleverly overcame Poland’s Aleksy Kuziemski in four tough rounds when the referee waved off the fight when Kuziemski suffered a bad cut over his left eye, and a busted nose in the previous session.

The challenger landed some solid shots and was methodical in his approach, and looking to mix it with Cleverly. But the Welshman was in control, although rather than box his way in, he neglected his jab to trade blows with Kuziemski, landing good shots to the head and body and was beginning to get a hold of the fight it seemed when the fight was stopped.

Kuziemski was Cleverly’s third opponent in as many days, after the Juergen Braehmer withdrawal and then replacement, Tony Bellew failing to make the weight, but at short notice and was out of his depth and Cleverly moves onto hopefully some big name fights.

Frankie Gavin outpointed Young Mutley to win the WBO Intercontinental welterweight belt. But the fight wasn’t a classic as Gavin struggled to shine against his experienced opponent who was canny enough to ride his best work and do enough to survive, but Gavin disappointed and didn’t show the sharpness in his work we have seen before.

However he ran out a clear winner with scores of 119-110 twice and 118-110, and takes his professional record to 10-0 with the win, the first time he has gone the full championship distance.

Former WBO super-featherweight champion Nicky Cook, made a return to the ring after being stopped in his last fight against Roman Martinez, with a points win over Youssef Al Hamidi over six rounds.

Another fighter on the comeback after defeat, was former British super-middleweight champion Paul Smith, who returned to winning ways with a first round KO over Hungarian Josef Matolcsi.

Smith will now campaigning down at middleweight after losing his Lonsdale Belt to DeGale in his last fight. Smith having his first fight under new trainer Joe Gallagher. He takes his record to 30-2, 16 KO’s and looked in good shape and good form as he got back to winning ways.

Jamie Cox stopped Marcus Portman in the third round.