British BoxersMarch 28, 2011
LATEST BOXING NEWS0 Comments4 min read
Lennox Lewis and the Klitschko brothers are very good chess players by all accounts, Lewis has a 2000 rating in the game which I’m told is a high standard and he always did compare the tactics of boxing to that of a good game of chess. I wonder if either have any designs then on entering the world of Chessboxing? 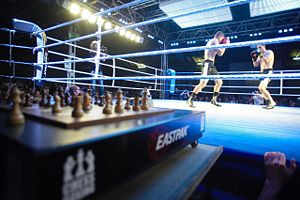 On Saturday night, London played host to a rather unusual new combined sporting event, that mixes brains with brawn. Saturdays showdown saw Dutchman Hubert “The Wardrobe” Van Melick beat challenger Patrick Teehan.
The rules are this – the contest sees alternating rounds of chess and boxing. After the boxing round is over, the chess board is carried into the ring and the fighters sit down for four minutes of chess moves before the next round of boxing!
The winner of a contest is the first one to either knockout their opponent during the boxing or a checkmate them in the chess round.
Although the extremists of both sports might take some persuading to take on board game that originated in Berlin, it is something that as been gaining momentum and a large following.
The sport traces its origins to a 1992 comic book by French artist Enki Bilal, “Froid Equateur”. The comic, which depicted the hybrid sport, inspired Dutch artist Iepe Rubingh to make it happen for real.
Rubingh said the contest favours the athlete who is clever and strong.
“There is no sport that combines mental and physical aspects, so when I came up with the idea I was immediately intrigued because it combines mental abilities and physical capabilities,” he said. 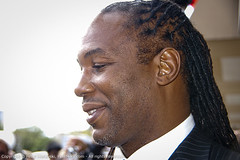 Lennox Lewis, (right) Britain’s former undisputed heavyweight champion of the world once said that chess was one of his preparations for boxing and helped him think more in the ring and work to a strategy.
“It’s like boxing – there’s a strategy, you have to decide what move to use, or what combination of moves, Lewis said.
“I’m thinking less when I’m boxing, because the reaction time is a lot quicker, but some people call me the chess boxer because they say I think too much when I’m in the ring.
“I am taking my time about it and they are not seeing the action they want. Well, that is because I am thinking of the proper strategy to defeat this man. I am thinking and boxing at the same time. Some boxers just go in there and just throw punches and hope to win.” added Lewis.
The basic idea in chessboxing is to combine the No1 thinking sport and the No1 fighting sport into a hybrid that demands the most of its competitors – both mentally and physically.
In a chessboxing fight two opponents play alternating rounds of chess and boxing. The contest starts with a round of chess, followed by a boxing round, followed by another round of chess and so on.
A contest consists of 11 rounds, 6 rounds of chess, 5 rounds of boxing. A round of chess takes 4 minutes. Each competitor has 12 minutes on the chess timer.
A round of boxing takes 3 minutes. Between the rounds there is a 1 minute pause, during which competitors change their gear. The contest is decided by: checkmate (chess round), exceeding the time limit (chess round), retirement of an opponent (chess or boxing round), KO (boxing round), or referee decision (boxing round).
If the chess game ends in a stalemate, the opponent with the higher score in boxing wins. If there is an equal score, the opponent with the black pieces wins. visit for more information www.wcbo.org
.