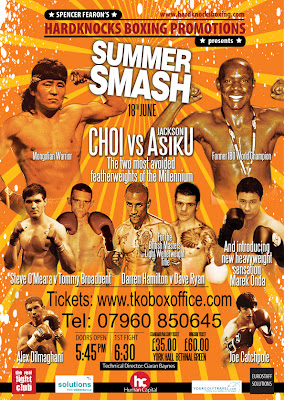 Newly crowned Southern Area Light Welterweight Champion Darren ‘Mr R&B’ Hamilton is back in action this coming weekend, at the Hard Knock Boxing Promotions ‘Summer Smash’ event at York Hall in Bethnal Green, London on Saturday 18th June 2011.
Hamilton, who put on a scintillating performance to wrenched the Southern Area belt from then current champ Peter McDonagh’s grip back in March, will be facing another regional champ on Saturday, the Midlands Area Light Welterweight Champion Dave Ryan.
Both Hamilton and Ryan will be looking to add a second belt to their collection, as the the vacant British Masters Light Welterweight title is up for grabs on Saturday night.
Earlier today Mr R&B took a little time to talk about the upcoming clash with Dave Ryan, “Basically this fight to me is a fight, not like the last one, that could go either way.
This guy fights one way, he comes forward, and that’s tailor made for my old style. This guys very tough, never been stopped.
For this fight we’re changing style again, we’re going back to the defensive mode.
This guy’s a big hitter so we’re not taking any risks. It’s a frustrating style, but I know the type of fighter this guy is and the old style to frustrate him. That’s all I’m gonna do is frustrate him and stick the jab in his face all night.
This is what I’m looking to do, so yeah back to the old Mr R&B style on the 18th, definitely
I’m going to be honest and say I can see me stopping him with a serious cut, as he doesn’t move his head, takes a lot of shots.
My jab at the moment, it cuts, it bruises. There’s no way he’s going to be able to take my jabs for a long period of time. I see it getting stopped around round seven.”
Hamilton then went on to talk about what the future holds for him, “After I’ve won this I want the English title next, we’re looking at the English Champion (Nigel Wright).
There was a possibility of getting the British Champion (Ashley Theopane) but it’s no go on that one at this time. Spencer (Fearon) has tried everything but it’s a no go so we’re looking at the English title.
After we’ve got the English then it’s onwards and upwards for the British and if that doesn’t happen there’s been a lot of speculation. Everybody wants to see me and Curtis Woodhouse. We’ve been having words on Facebook, and I want to give the people what they want.”
Darren Hamilton versus Dave Ryan, for the British Masters Light Welterweight Title, will be the main supporting feature bout at Spencer Fearon’s Hard Knock Boxing Promotions ‘Summer Smash’ event headlined by the WBU/WBF Featherweight Champion of the World Choijiljavyn ‘Choi Tseveenpürev, better known as Choi The Mongolian Warrior against former IBO Featherweight Champion of the World ‘Action’ Jackson Asiku from Australia.
A top class undercard in support of the two featured bouts that includes West Drayton’s sensational Light Middleweight prospect Steve O’Meara who takes on Newark’s heavy hitting A.A. Lowe in a highly anticipated eight rounder.
Worthing, Sussex’s unbeaten Lightweight prospect Alex Dilmaghani is set to face a tough battle against former Irish title challenger, West Ham’s own Mickey Coveney.
Next up is another unbeaten rising star, Dagenham’s Joe Catchpole who will face Scunthorpe’s Steve Spence. Also at Light Middleweight, Hayes’ resident war lord Robert Lloyd Taylor is back in action against Leeds hardman Tommy Broadbent.
Philadelphia, USA based Irish Middleweight Simon ‘Slick Fightin Irish’ O’Donnell makes his first visit to the York Hall to take on Doncaster’s Jason ‘Daddy Cool’ Ball.
Finally the highly rated London based Slovakian Heavyweight Marek Onda will be making his professional debut.
Tickets, priced £35 (Standard seated) and £60 (Ringside) for the ‘Summer Smash’ event are available on-line now at www.tkoboxoffice.com, in person at The TKO Boxing Gym, Gillian House, Stephenson Street, Canning Town, London E16 4SA or The Real Fight Club, 2-6 Curtain Road, London EC2A 3NQ or from any boxer appearing on the show. For further information call: 07960 850645
pics by  Gianluca (Rio) Di Caro
JustListen2This Publicity & Promotion