British BoxersJune 4, 2011
LATEST BOXING NEWS0 Comments6 min read
Former WBA light welterweight champion Gavin Rees meets unbeaten Andrew Murray at the Motorpoint Arena in Cardiff tonight, for the vacant European lightweight title and believes a win against the Irishman will set him on course for another world title charge.
Rees, 31, from Newbridge is also a Prizefighter winner and British title holder and has only lost once in 32 professional fights. But speaking this week to the various media Rees feels that despite his ring successes to date, he has not achieved his true potential.
In July 2007 he out-boxed France’s Souleymane M’baye to claim the world crown. After that win, Rees admits to not taking the title as champion of the world has seriously has he should have done and subsequently lost his world title eight months later to Ukrainian Andriy Kotelnik.
The Welshman than changed training camps from Enzo Calzaghe and moved to new coach, former fighter Gary Lockett. The change and fresh approach to his career, saw him shed the pounds and 18 months later won the Prizefighter tournament to help set him back on the road to world glory and a new chapter, 13 years after turning professional.
“The European next, maybe a couple of defences and then hopefully I’ll get a world title shot again and be a two-weight world champion. That’s the long game plan for me.”
Rees’ last fight was against Liverpool’s John Watson. Rees won an hard 11-round battle in a terrific fight proving that his past setbacks hadn’t robbed him any of his fighting spirit and believes that he will have too much experience for the highly rated Murray, even though Rees says he has seen little of his opponent.
“I haven’t seen a lot of him, he hasn’t been televised a lot in Britain, but I’ve seen clips of him on YouTube,” Rees said.
“He’s going to come in confident, unbeaten, but I’m going to take that game plan away from him, just as I did with John Watson; he was unbeaten.
“There’s so-called journeymen, but it’s a different prospect when you stand in the ring with me.
“In the Watson fight I didn’t pace myself, I blew up in the middle of the rounds, so I’m going to pace myself a lot better and I can do a 12-round distance a lot better.
“I see myself stopping him towards the middle-to-late rounds. My speed’s too much, my power’s too much and I’m feeling greater than I ever have at this stage of my career – I’m feeling fantastic.” added Rees. 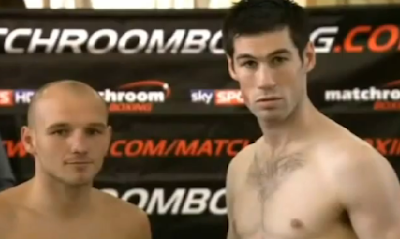 Unbeaten Cavan man Andrew Murray a former Ulster and Irish senior champion, who’s promising career as not quiet got going. Will look to take this opportunity to gatecrash the world rankings and it is a chance he is ready to grab.
Murray 28, has the longest unbeaten run in Irish boxing (24-0, 12 KO’s) and has prepared meticulously for this fight under the guidance of highly respected coach John Breen in an isolated six week training camp in Rosmuc, Co Mayo.
“This is the chance I’ve been waiting for, I think for some time people have been wanting to see me in a big fight and now my chance has come I’m going to grab it.” said Murray.
“Winning such a major title would really get my career going. I’m feeling very confident because I have put in tremendous work in Rosmuc.
“I’ve never felt stronger – it’s the first time I have been away at a training camp and just to have that complete focus away from the family has been great.
“There’s no doubt that I will have to raise my game, I have to be ready for the toughest fight of my career but that’s what you would expect and that’s why I have prepared so well.
“Rees has proved himself at light-welterweight winning a world title and obviously people will have him as the favourite, but I know what I’m capable of. I’ve served my apprenticeship and now this is the right time to win a big title.
“Not many Irish fighters have won the European title, it’s a special belt and I’m feeling very confident I can win this. I’m ready to dig deep, very deep.”
British Boxers Prediction?
Gavin Rees wins on Points
Undercard and Official weigh-in results
Gavin Rees (9st 8½lbs) v Andy Murray (9st 8lbs)
Robbie Turley (8st 9½lbs) v Carl Frampton (8st 10lbs)
Eamonn O’Kane (11st 8½lbs) v Dimitrijus Kalinovskis (11st)
Steve Williams (10st 2lbs) v Araik Sachbazyan (10st 1¾lbs)
Jason Cook (10st 10½lbs) v Mounir Guebbas (10st 6½lbs)
Tony Dodson (TBC) v Jamie Ambler (TBC)
Frankie Borg (TBC) v Costas Osben (TBC)
Jeff Evans (TBC) v Dean Walker (TBC)
Matchroom Sports promote this eagerly anticipated matchup which will be live on Sky Sports HD1 from 10.30pm – Tickets are available on the door at the Motorpoint Arena Cardiff from 6.30pm – priced £30 unreserved and £50 ringside.