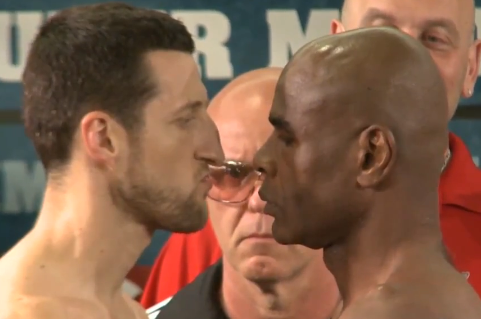 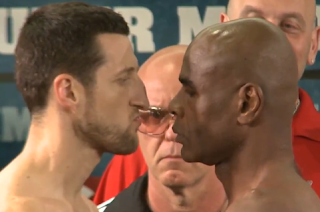 Nottingham’s WBC super-middleweight champion Carl ‘The Cobra’ Froch knows that tonight Glen Johnson stands in his way of a Super Six final against Andre Ward and the chance to cement his claim one of the best British boxers of the modern era.
Froch 33, defends his belt against ‘The Road Warrior’ of boxing in Atlantic City on Saturday night in the semi-final of the tournament, weighed in one pound heavier than Johnson for their Super Six World Boxing Classic semi-final in Atlantic City on Saturday night.
The Brit weighed in at 167.5lbs for the fight, which will see him defend his WBC world super-middleweight title. While Jamaican veteran Johnson, who has campaigned mainly at light-heavyweight in the past, was surprisingly 1.5lbs under the super-middleweight limit of 168lbs (12 stones)
The winner of the fight, which will be held in the city’s famous Boardwalk Hall, will face Andre Ward in the final of the tournament later in the year and Froch, who has lost just once in 28 fights, is prepared to fight the 42-year-old veteran former world champion close or at range.
“I feel really strong at the weight, so I’ll go 12 rounds if necessary, but hopefully it won’t be necessary. But if it is, I’ll be there,” Froch told Sky Sports News.
“It could be a boxing master class from me, a one-sided affair, or it could end up being quite a brutal affair.
“Hopefully it’s a boxing master class where I box and move and dominate the ring, but if necessary I’ll go into the trenches, I’m happy to oblige.”
Meanwhile David Haye has warned Carl Froch to keep his concentration ahead of his Super Six semi-final clash with Jamaican Glen Johnson.
Speaking on his Twitter account, Haye commented: “Carl can win fight wide on points if 100% focused like in (Arthur) Abraham fight Carl doesn’t need to mix it up in mid/close range!”

Froch’s new promoter and big boxing fan Eddie Hearn thinks ‘The Cobra’ is right up there with the very best of British boxers and his achievements and level of opposition on the bounce deserves to be mentioned in the top bracket of UK fighters.

“It’s an interesting situation because Carl is one step away from the SuperSix final and probably one of the biggest fights of the year against Andre Ward,” said Hearn.

“But of course, he can’t look past a tough Glen Johnson who will be doing everything he can to force his way into the final. It’s a fight Carl should win and is expected to win but one he knows will be very tough and one hell of a war.

“In our 20 years in boxing we have been involved in some of the biggest nights in boxing with the biggest names – and indeed the super-middleweight division itself with Eubank and Benn – and Carl ranks up there with the very best of them, no doubt about it.

“We want to reach the final against Ward which we know will be a tough, tough fight but Carl has never shied away from such a fight and he would give it everything against Ward.

“No British fighter has ever faced the current run of fights Carl has taken on – in fact, very few fighters in the history of the game can say they have fought the best back-to-back – and certainly no-one has ever performed to Carl’s level in such massive events against the best names.”

The winner of the fight will go on to face WBA king Andre Ward in a unification fight later this year and Ward, who reached the Super Six final by defeating Arthur Abraham, cannot pick a winner in this one

“It’s a 50-50 fight in my opinion,” said Ward. “Either guy has the potential and the ability to win this fight. At this level you never really know, so mentally I am prepared to fight either guy.”