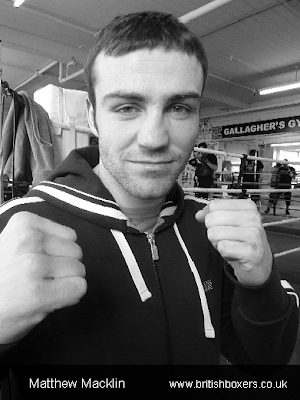 In a fantastic toe to toe battle in Germany, a brave and motivated Matthew Macklin lost his world title challenge to WBA middleweight champion Felix Sturm by a split decision at the Lanxess Arena in Cologne on Saturday night.
The first judge who was impressed with Macklin’s aggression and work rate had it 115 – 113 for the Birmingham man, while the other judges scored it 116-112 to the champion preferring his more accurate work, but from a British perspective, Macklin (28-3, 19KO’s) can feel very unlucky to have just missed out on his dream chance and in our view deserved to be crowned world champion.
The 29-year-old Macklin burst out of the traps and for the first six rounds over whelmed the champion with his all action in your face style, designed to burst the lungs of Sturm and looked to be on course for a stunning victory in the Germans home town.
Macklin looked full of confidence as he dominated the 32-year-old Sturm (36-2, 15KO’s) who appeared surprised and unsettled by Macklin’s tenacity, will to win and plan to out work him in every exchange. Both suffered cuts in the fight and pushed themselves into uncharted territory, questioning the heart and resolve in equal measure to produce a great fight.
Macklin landed good shots throughout, including plenty of right uppercuts and hooks around the guard of Sturm, but the tough champion took them and countered with his own pin point accurate work. Macklin’s body shots in particular were hurting Sturm who kept his composure to come on stronger in the second half of the contest as the crowd spurred on their man.
Felix Sturm vs Matthew Macklin – WBA middleweight world title fight
MrMegaBoxing
Sturm fighting in his 16th world title fight finished the last round well catching Macklin with a flurry of shots that he walked through to finish the fight as it had started. Both men deserve a pat on the back for the performance they both put up in this class world title fight.
Macklin’s defeat was the first loss in 50 fights for his trainer Joe Gallagher. But that terrific run of straight wins for Gallagher’s Manchester gym was only just broken and Macklin and his camp will no doubt question the decision and will hope to get a rematch with Sturm by the end of the year.
Well done Matthew you did yourself proud!

“Next Time I’ll Smash him to Pieces” – Matthew Macklin

BoxingKayoVIII
British heavyweight veteran Danny Williams (right) was stopped in the 7th round by Unbeaten German based heavyweight contender Manuel Charr (18-0, 10 KO’s) on the Cologne undercard.

Charr kept the pressure on the 37-year-old Williams (43-10, 33 KO’s), hurting Londoner Williams in the 3rd before stepping on the gas again in the 7th and a combination of big unanswered shots hurt the defenseless Williams and the referee stopped the contest.

Danny who had recently announced his retirement from boxing, still continues to go on, fighting abroad and going 7 rounds with the younger fresher Charr, proved that the Brixton Bomber can give anyone a fight, but its surely only a matter of time before the big man calls it a day once and for all.