BritishBoxers are proud to introduce www.sporteagle.tv and bring you their first show in a new series of German Sport in English. We look forward to working with our friends and partners at SportEagle TV to bring you the latest fight news from Germany, with English commentary.

In this video SportEagle.tv presenters Tony and Albert discuss the Vitali Klitschko vs. Dereck Chisora fight, plus the aftermath and the 13th round’ when Chisora and Haye came to blows at the post fight press conference. – The video covers the weigh-in and the slapping incident.

We also
ask a selection of those people in the crowd before the fight how they
think the fight will go. We have footage of the press conference before
David Haye arrived and of course some very comprehensive footage of the
brawl that happened between Chisora and Haye. Finally we wrap it up with
a fun clip of Ola Afolabi and Albert showing us how a stare down should
be done. Enjoy. 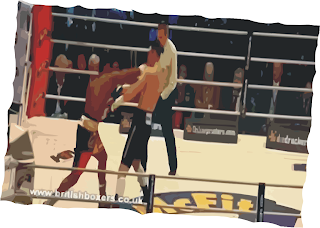 For Dereck Chisora going 12 gruelling rounds
with a 3 time world heavyweight champion wasn’t enough or him on
February 18th. After being unanimously out-pointed in his shot at the
WBC belt at the Olympiahalle in Munich, the Zimbabwe born British
fighter squared up to former world heavyweight champion David Haye at
the post-fight press conference and then all hell broke loose.

The
trouble was brewing from the moment Klitschko promoter and manager
Bernd Boente compared Chisora’s positive performance in the ring to
David Haye’s lame effort last year against the younger Klitschko,
Wladimir. ”Contrary to David Haye, Chisora showed a great performance
and really went for it. He was not figting on the back foot like Haye”
said Boente.

That comment rattled Haye who was standing at the
back of the auditorium. An argument between the two then ensued until
Chisora interrupted by offering to ”get it on” with Haye in London.

Chisora
proceeded to insult Haye by claiming that Sky Sports don’t show Box
Office because of him. ”He messed up boxing for all the young fighters
coming up and I’m going to give him 2 slaps for that” claimed Chisora.

The Full uncut press conference brawl between Haye and Chisora
The
mud slinging continue until Chisora asked Haye to ”say it to my
face”. With that Chisora left his seat and walked to Haye, removing his
gown on the way through the crowd of journalists. Within seconds Haye,
with a bottle in hand, appeared to throw a punch at Chisora. A melee
then began with Chisora’s trainer Don Charles was also involved along
with Haye’s trainer Adam Booth who received a cut to his forehead from a
camera tripod that Haye had thrown.

It was a dramatic event that
sadly overshadowed the night’s boxing. Despite winning his 44th
professional fight and his 8th successful defence of the WBC title
Vitali Klitschko was less than pleased with his performance. ”I am very
upset because I wanted to knock him out, it’s not happened” said the
champion. It later transpired that he sustained a torn ligament in his
shoulder in round 4 of the fight which meant he was effectively only
able to box with one hand for the remaining rounds.