Muhammad Ali ‘This is your Life’ from the London Theatre 1978

Muhammad Ali, born Cassius Marcellus Clay on the 17 January 1942, in Louisville, Kentucky, USA. Beat more champions and top level contenders than any heavyweight champion in history and is widely regarded as the Greatest heavyweight boxer of all time.

Over the years Ali has had a close relationship with British Boxing and it’s people, who took him to their hearts, during his struggles in 1967, when his world title was cruelly taken from him, outside of the ring.

To the fight fraternity in the main, it was one step too far. We had taken this brash young man to our hearts and noticed the glint in his eye, has he danced his way into our game like a breath of fresh air, influencing the many boxing coaches and fighters to marvel, teach and learn from this master of the ring.

In this fantastic archived video from 1978, from one of ‘The Greatest’s’ many trips to the UK – Ali is surprised by Eamonn Andrews, the presenter of the popular TV series ‘This is Your Life.


Not many things leave the greatest stuck for words, but seeing his family and friends and a host of faces from the past paying unsuspected visits visibly move the great man.

Enjoy the full show video above.

The Greatest – A Tribute from British Boxing 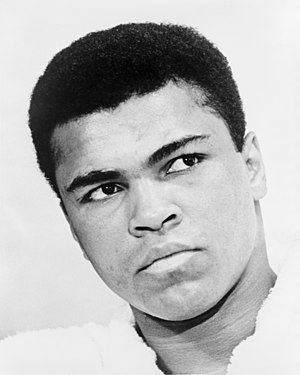 An Olympic Gold medal winner at the 1960 games in Rome, Italy. He famously threw the winners medal into the Ohio river not long after his return to America at a time of segregation in the USA.

The young Ali was disillusioned and disgusted by being refused service in an all whites restaurant, although some reports say he actually lost it, either way Ali was subject to terrible colour prejudice at that time!

Fighting for his country and representing, were not enough it seemed to be accepted in an era thank God that is past us in the extreme of cases.

In 1996 at the Olympics in Atlanta, Georgia, ‘The Greatest’ was awarded a replacement Gold medal, when he lit the torch to open the games in an emotional moment for him and sports fan’s worldwide.

In a career that was has dramatic outside of the ring as it was in it, Ali defeated Sonny Liston (twice), Floyd Patterson (twice), Ernie Terrell, Jimmy Ellis, Ken Norton (twice), Joe Frazier (twice), George Foreman and Leon Spinks.

All of Ali’s defeats were by heavyweight champions: Frazier, Norton, Spinks, Larry Holmes and Trevor Berbick. Ali also beat undefeated fighters Sonny Banks (12-0), Billy Daniels (16-0), ‘Rudi Lubbers’ (21-0) and George Foreman (40-0) during a boxing legacy that will live on as long as the sport is still practised.

When Ali stopped Sonny Liston for the World Heavyweight Title, Liston had not lost a fight in over 10 years.

In 62 professional fights, Ali was only stopped once by Larry Holmes on a TKO. He was never counted out, but was unable to come out for the 11th round in their title fight 1980 for the WBC title.

In June, 1967, Ali was convicted of violating the Selective Service Act (knowingly and wilfully refusing to report for and submit to induction into the armed forces), and was sentenced to five years in prison, fined $100,000 and had his world title stripped from him.

Ali would not fight again for three years, officially retiring in 1970 to allow the winner of the upcoming Joe Frazier v Jimmy Ellis unification bout to be considered for the undisputed champion title. The Great man went onto retain the heavyweight crown, he never lost in the ring some 7 years later in 1974, when he knocked out the unbeaten and fearsome George Foreman in Zaire, Africa, the famous ‘Rumble in the Jungle’

Ali probably went on too long and his fight against Larry Holmes and then a 10 round points defeat against Trevor Berbick, his last fight in December 1981 – are still too painful to watch. But Ali had stamped his legacy on boxing many years before them last sad appearance’s.

Ali British Boxing Salute you and always will!