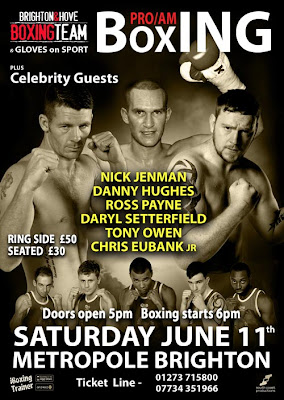 Brighton & Hove Boxing team headed by former British heavyweight champion Scott Welch are bringing professional boxing back to the South Coast and are hoping to emulate the nights when Chris Eubank, Scott and co-promoter Michael Alldis amongst others, were exciting the British boxing scene and winning titles.

Welch and former British super bantamweight champion Alldis are staging Brighton’s first professional boxing show in a long time and this weekend sees their first promotion at the same arena that Welch won the British and Commonwealth heavyweight titles by stopping James Oyebola in round 10 at the Metropole Arena in Brighton, Saturday July 11.

The show will be a mixture of Amateur and professional bouts and will also be attended by celebrates for the official launch of Scott’s other venture close to his heart, the new iBoxing Trainer Smartphone App. which is designed to help youngsters get into boxing and is approved by the WBC (World Boxing Council) and the BBBofC (British Boxing Board of Control)

Chris Eubank jnr the son of former world champion Chris, will be the name that springs to mind on the Brighton bill, when he fights a rematch with Nathan Decastro.

The Lincolnshire boxer Decastro had dropped the son of Brighton’s former world middle and super-middleweight champion on the canvas in their previous meeting, although Eubank went on to win and the rematch will be just as exciting as there first toe to toe war. For Eubank the younger, who vaults over the top rope, just like his father used to, this could be one of the last times we see him in a vest, with the boxer looking to enter the pro ranks soon.

Eubank’s trainer Welch, who many may remember starred alongside Brad Pitt and school friend Jason Statham in the Guy Ritchie film Snatch. is looking forward to his charges rematch with Decastro and expects a great fight! “It’s the first time Eubank has had a count. It was a war and it will be another great fight when they meet again.” (full interview below)

Eubank’s return with Decastro is just one of ten amateur bouts on Saturday’s Pro-Am show at the Metropole Hotel, an Brighton.


Brighton and Hove’s England international Lloyd Ellett is up against an experienced opponent from Gloucester while heavyweight Irv Pascal has a re-match with Decastro’s Bracebridge club-mate Mitch Smith looking to avenge a points defeat in their first encounter.

The evening is broken up with a comedian and then resumes with the professionals in action.

BritishBoxers Chris Maylett caught up with Scott to talk about the show and his new iBoxing Trainer App. 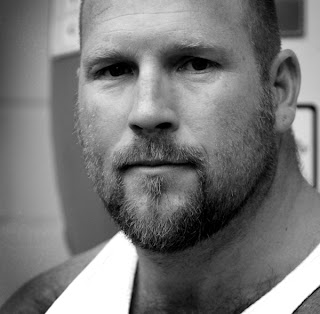 Scott tell us about the Saturdays show and your participation on bringing professional boxing back to the Metropole arena and Brighton & Hove?

Scott Welch: Great town. We desire to make the south coast a major venue for boxing in the future. The Metropole is where I won the British Title and I hold it very dear to me. I remember when I fought there and when I made my ring walk, everyone stood up and cheered me! It was a moment I’ll never forget, the hairs on my neck stood up and I remember thinking, there is no way I will not lose this fight. Brighton is a great place and The Metropole is the best boxing venue on the south coast.

Professional boxing hasn’t been a common sight in Brighton in recent years?

Scott Welch: No, but we intend to change that. We will also be holding a show in October at the new Amex Stadium the home of Brighton & Hove FC and hope to have frequent shows from now on.

Which of your boxers should we look out for on the 11th?

Scott Welch: All of them, there are some great fighters. We have one pro heavyweight Danny Hughes – and a couple of our lads are turning pro after the show on the 11th.

Tell us  about the new iBoxing Trainer App. That you have produced?

The aim is to encourage youngsters into boxing, whether they are male, female, from the UK or anywhere else in the world. The sport always needs enthusiastic youngsters coming in to it. I hope the app, along with everything else we are doing, helps to encourage them to give it a try. The App. was recently approved by The WBC and BBBofC too.

Is the App. proving a success and are people now using it.?

and within 24 hours of it going live we had people already using it in the UK and 45 other countries, including the UK, USA, Brazil, Mexico, Russia, France, New Zealand, Belgium, Slovakia, Canada, Germany and even the Republic of Korea. So I hope it will be a global success and we will also be doing our part to promote our sport. read more…