Amir Khan ‘Zab Judah could be my toughest fight yet’ 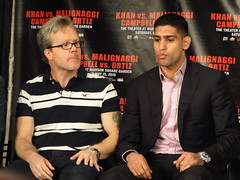 Bolton’s WBA light-welterweight champion Amir Khan believes Zab Judah will be his toughest test to date when he faces the experienced IBF champion at Mandalay Bay Hotel in Las Vegas this Saturday night.

Khan 24, is under no illusions about the task that lies ahead of him against the five time world champion Judah, who first won the title he currently owns against South Africa’s Jan Piet Bergman in 2000.

Brooklyn born Judah has shared the ring with some of the best fighters around including Kosta Tszyu, Floyd Mayweather and Miguel Cotto – He also holds a win over Britain’s former world champion Junior Witter and the 33-year-old southpaw has also campaigned and won world titles at welterweight and is currently enjoying a fresh revival in the game.

Judah won the IBF light-welterweight crown in his last fight when he stopped Kaizer Mabuza in the 7th round in March – 11 years after winning the same belt against Jan Piet Bergman in February 2000.

But despite the impressive CV that the American holds and the threat he holds, Khan is confident that he will have have the youth and his hard training under coach Freddy Roach at his LA training camp, will be enough for him to take Judah’s throne.

“He’s very experienced. He’s got skill and that southpaw style which is very awkward.

“There is always a young lion coming up and I’m going to take him out and take his throne. I want world titles and he holds a world title.

“It’s a unification fight and I hope he’s been training hard because once I win I think that’s it for Zab Judah, I think he’ll have to hang his gloves up.” added Khan.

Khan is also looking forward to fighting in Las Vegas again following his win against Marcos Maidana last year as he looks to follow the likes of Lennox Lewis and Ricky Hatton, who fought at their prime in Sin City the new Mecca of boxing super fights!

“Vegas is the Mecca of boxing nowadays,” Khan said. “The biggest fights are over there and the Mandalay Bay has seen some big, big fights. It’s the second time I’m going there and I’m only 24. Not many fighters have ever done that at this age.

“Normally fighters head there towards the end of their careers. I love fighting away from home because I’m not one to feel like the outsider. It’s going to bring out the best in me.”

Judah has tasted defeat six times during a 49-fight career and Khan should have too much speed and fitness for him and I pick a unanimous points win for our boy.

The winner will in line for a second crack at Amir Khan’s title. Colombian Prescott is the only man to have defeated Khan, when he took just 54 seconds back in 2008, to knock-out him out in a shock result in September 2008. While McCloskey lost his last fight against Khan when he challenged for his title in April in controversial circumstances.

A points decision went Khan’s way after the fight was stopped in the sixth round after the Irishman suffered a cut eye after a clash of heads.