Manchester’s Craig Watson has the chance to regain the British welterweight belt, he lost in dramatic fashion in April to Lee Purdy, when the pair meet in a rematch on July 16 at the Oldham Sports Centre.
The first fight at the MEN arena on the Khan vs McCloskey undercard, saw Watson lose his treasured Lonsdale belt to the Colchester man, getting stopped in the 5th round after dominating the fight up to that point, with his boxing skills.
Watson 28, was outboxing Purdy up until a big right hand caught Watson flush on the chin, bringing an end to the fight and the changing of the belt.
The rematch will take place in Watson’s home town of Oldham, Greater Manchester, which will be the first time professional boxing has been held in the area for four years and the first British title fight there for over 15 years. 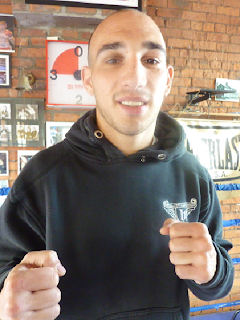 Watson, who joined Hatton’s Manchester based stable of fighters last year, told BritishBoxers that he is happy to be getting a rematch with Purdy and is ready to bounce back stronger.
“This is my chance to put right what went wrong against Purdy last time. I was winning the first five rounds, but I didn’t have any power in my shots.” said the former champion.
“In the last fight I didn’t feel myself, the power had gone and that was because I was run down, as I had not taken enough time off before it.
.
“But I’m not making excuses the better man won that night I shouldn’t have took the fight so close to the O’ Donnell fight looking back in hindsight. But this time I have been on holiday and I’m more relaxed.
.
“I feel so happy that I have a rematch and to have it in Oldham is a dream come true I must thank everyone an Hatton Promotions for making this happen. Ricky (Hatton) has done me a big favour here and I am not going to let him down.

“I over trained for the first fight there is a lot of things I’m going to change about this one I cant go into to much detail but you are gonna see a total different Craig Watson.

“For the first five rounds of the last fight I made it look like target practice I just had to pop in my shots this time, I will make sure every bit of my armory is firing.” Watson added.
A rematch was written into the contract and promoter Ricky Hatton has organised an immediate rematch for Watson on home soil, a chance that he says he is ready for and determined to claim back the title he says he lost, having been drained and not himself in the last fight.

Ive not watched the last fight back, I don’t want to see it. I know what went on, it still goes around in my head everyday. Ive trained like an absolute demon and I just want to punish him for it.” – Craig Watson