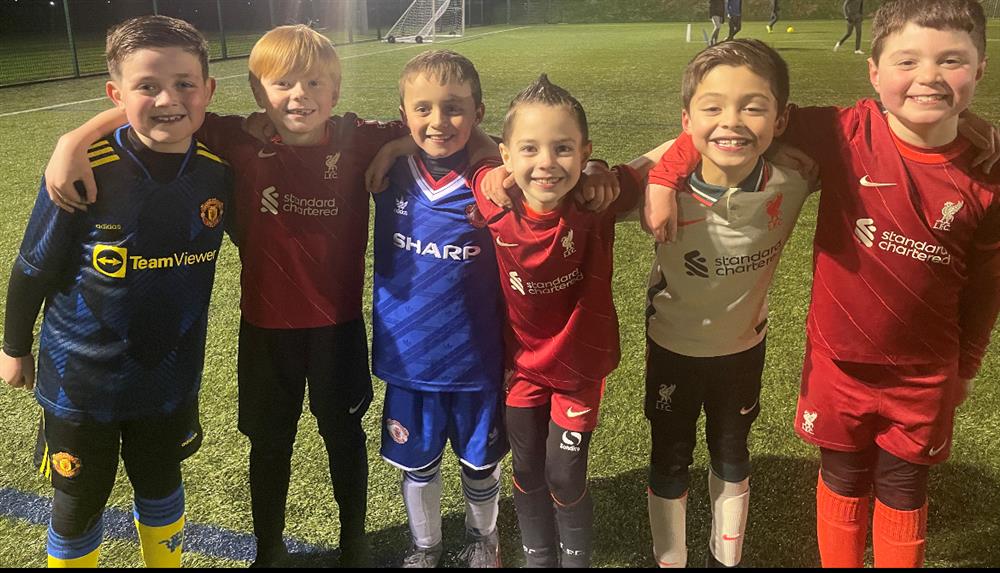 The initial idea of raising money for Alder Hey Children’s Hospital was born when Isaac O’Connor saw Tyson and Paris Fury on the news that their newborn child was ill and being cared for by Alder Hey. Isaac, who was seven at the time felt moved by the story, as he had previously met Tyson and spent time with his other children. The video made by Paris was done by surprise when she was told about the walk by the BBC news team.

Due to the huge success of the walk in October 2021 for Alder Hey in which he completed a 24 mile walk from his home address in Merseyside to Old Trafford to watch the game between Manchester United and Liverpool.

He finished the challenge just in time to go see the Manchester United Vs Liverpool match ⚽@ManUtd @AlderHey pic.twitter.com/RpckJFVS9W

Isaac and five of his team mates Alex Hoogendyk, Zach Harding, Max Davies, Henry Bednarczyk and Jack Elliott (pictured above) have now come up with the idea that they would like to walk the return fixture between both clubs on the weekend of the 19th & 20th March 2022. The difference being that this walk will be from ground to ground and will be much further.

All the boys are mad about football and love going to the games. Alex, Max, Henry and Jack are big Liverpool fans whilst Isaac and Zach are both regulars at Old Trafford where they follow United. The boys have played together on the same team for four years and they are not  only team mates but are best friends in and out of school.

The six boys, who are all eight, love helping others and they would like to raise money for the fantastic Alder Hey Children’s Hospital. Regardless of who your team is Alder Hey is a fantastic hospital which gives very poorly children around the country hope for the future.

The boys would like  to raise a lot of money for the hospital by walking to the game which is 32 miles from stadium to stadium. This walk will take around twelve hours  hours to complete over the course of two days and the walk will be completed just before kick off in time for me to watch the game. The walk is going to be covered nearer the time via local news and TV outlets.

To lend your support to Isaak and the lads, the Just Giving Page is here: https://www.justgiving.com/fundraising/isaacjacobbigwalktothegame