British BoxersSeptember 23, 2011
LATEST BOXING NEWS0 Comments7 min read
23rd September 2011
On the 21st September 1991, in his rematch with Chris Eubank for the WBO super-middleweight title, Michael Watson collapsed at the end the titanic battle and was in a coma for 40 days, with a blood clot on his brain leaving him partially paralysed and unable to speak.

In the fight Watson had dominated Eubank, given him his hardest challenge to date and was on the verge of stopping the Brighton champion in the 11th round when he dropped Eubank with an unrelenting barrage of shots, the last he would ever throw in a boxing ring.

Eubank groggily got back to his feet, the referee looked into his eyes and then signalled the fight to commence. On his last breath and with nothing left, or so it seemed Eubank carried on but was there for the taking. Watson came forward to finish the job and claim the world title that had been denied him in there previous meeting, a disputed points win for Eubank, that many thought was the wrong verdict and that Londoner Watson had done enough to win.

Then the shocking and surreal events that shook boxing and took Watson to the brink of his maker, were played out almost in slow motion. Eubank summoned and then produced a punch from the doldrums of his fighting instincts, that caught Watson flush on the chin with a right uppercut that dropped him heavily.

Watson rose to his feet, but was out on them, just as the bell rang to signal the end of the penultimate round of the contest and almost Watson’s life. Watson trainer Jimmy Tibbs took him back to the corner stool, but no one was to know the effect that punch had on him and the events that happened after were moments that are almost too hard to re-visit.
Watson was too unsteady to make it to centre ring, as referee Roy Francis called the fighters to touch gloves for the 12th and final round, for Watson the clock had already started ticking and his injuries were in need of medical attention at this point. Eubank sensing his man was in trouble pounced with his natural boxing instincts to force Watson into a corner raining down shots on Watson, who still used his own instincts to cover up.

But the referee reeling Watson was in trouble and with nothing left, jumped in to stop the fight for Eubank to retain his title.
Watson collapsed in the ring soon after and was in serious trouble. There was no ambulance or paramedics at the event. After more than eight crucial minutes, before doctors who had attended the fight and wearing dinner jackets arrived, during this time the fallen fighter had received no oxygen. A total of 28 minutes had elapsed before he received the necessary treatment in a hospital neurosurgical unit.
He spent 40 days in a coma and had six brain operations to remove the blood clot and boxing held it’s breath and prayed that the peoples champion would make it through, the game fell into insignificance at this time and questions were asked about the moral fibre of the sport and it’s standing in a civilised society!

But for the fighter in Watson, the battle had just started and it would be tougher, more grueling and mentally and physically more painful, than anything he had ever experienced in the toughest of all sports.

Doctors initially predicted that if he does survive, he would never walk again and could be permanently brain damaged. Watson though had beaten the odds many times in his boxing career and it would take something of immense proportions to finish him off for good and this was not to be it.

After regaining consciousness, he spent over a year in intensive care and rehabilitation and six more years in a wheelchair while he slowly recovered some movement and regained the ability to speak and write with the help of consultant neurosurgeon Peter Hamlyn who operated on him and the dedicated team of doctors nurses and other unsung hero’s who cared and helped him survive and recovery against all the odds. 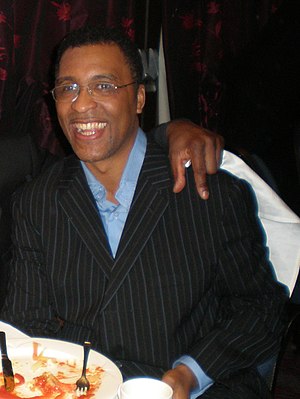 Watson later sued the British Boxing Board of Control (BBBoC) for negligence and won damages reputedly of around £1 million. The High Court ruled that the BBBoC was responsible for medical provision at a fight and that administering oxygen and resuscitation on site would have made a considerable difference to Watson’s outcome.

Mr Justice Kennedy said that the board was “in breach of its duty to Mr Watson”. This decision was upheld at the Court of Appeal, and the BBBoC did not appeal to the House of Lords, selling their London headquarters to pay out a £400,000 compensation settlement. The judge said that this was “sadly a long way short of the damages that he would have received had the defendants had the money or had they been insured”.

Then 19 April 2003, Michael Watson’s remarkable recovery was there for all to see when he completed the London Marathon, walking two hours each morning and afternoon for six days.
Accompanied by friends and family he raised money for the Brain and Spine Foundation, Watson slept overnight in a support bus that followed him along the way. Finishing the race by his side were his new best friends Chris Eubank, his former rival and Peter Hamlyn his neurosurgeon, who had become his personal friend.

Watson was awarded the MBE by the Queen in 2004. She told him that she had heard of his achievements. Watson was overjoyed and joked that this was his family’s first visit to Buckingham Palace, although they had passed in front of the Palace many times before.

The Michael Watson Story will live on and is a reminder of the realities and dangers of boxing. But also reflects the courage, will and spirit within a fighters makeup, to never give up, but to fight to end to achieve and survive.

Watson’s injuries and tragic case brought new rules and regulations to British boxing that have been mirrored around the world boxing bodies and in turn have helped save many other lives, with quicker response to fallen fighters and the correct procedures adhered to with doctors and anesthetists at ringside with the correct equipment and two ambulances always on standby.

Watson is an inspirational character to all and although it is 20 years this week since that faithful night at White Hart Lane football stadium against Eubank, he says with the same twinkle in his eye, he would do it all again. He still loves boxing and boxing still loves him.

Michael Watson we salute you!