James DeGale put his last fight against George Groves and first career defeat behind him on Saturday night, to win the European super-middleweight title against Piotr Wilczewski, handing the Polish belt holder only his second defeat in a 31 fight career.

The Londoner and former British champion was made to work hard and dig in overcoming some dicey moments for his reward. The tough, rock solid champion had not come to Liverpool’s Echo Arena to let his belt leave his waist easily and took DeGale into deep combat.

Southpaw DeGale chose to stand and trade with Wilczewski at times making for a decent fight, but he was caught by a big right hand from the champion in round five, his senses rattled DeGale recovered to gather them and get back into the fight.

Throughout the contest DeGale shipped more heavy punches than we have seen him ever take and at times you wondered if it had been a good idea jumping straight back in at this level, coming off the loss to Groves. But he stuck to his task shown his grit and came through to win the fight by majority decision, judges scores were 114-114, 115-113, 115-113.

DeGale’s right eye was cut early on and he was being caught by some stiff jabs and looping right hands from the Pole. It was not a vintage performance from DeGale, but it is easy to forget this was only his 12th paid fight and although his reputation, Olympic and British championship status, propel him, he is in effect still learning his professional trade.

Degale had his success’ when he used his movement and superior boxing skills and had his best round yet in round seven, when he opened up to baffle Wilczewski with some fast meaty digs. He also edged the eighth and began to put Wilczewski on the back foot. 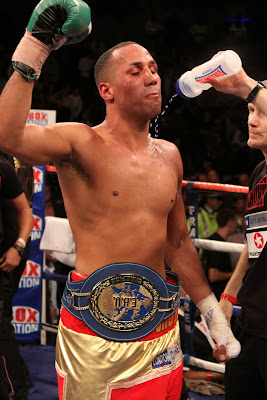 The Englishman was looking to now be in control of the bout, but he was still walking into some dangerous rights hands from the champion and both tested each other in a close 10th, 11th and 12th round and fought each other to a standstill.

But DeGale dug deep to retain a wafer thin advantage to take the decision and the European title.

The last
time DeGale was in the same arena in Liverpool, he beat local favorite
Paul Smith to win his Lonsdale belt in December 2010 –

Smith was ringside to watch his one time conqueror gain the European title, himself still in the British super-middleweight mix, Smith will meet Groves on November 5th at Wembley Arena and that should be a cracking bonfire night in London.

Overall DeGale came through a hard fight and prevailed, on his journey through the boxing wilderness it is a fight that could stand him in good stead in the future. DeGale will hope to get back in the ring soon, as he chases a rematch with arch enemy George Groves.

“I proved a point in there tonight. said DeGale.

“My last fight made me more determined than ever that nobody is going to do that to me again.

“It’s great to win the European title but I can still get a lot better. It was one of the toughest fights of my career. The Pole was a very tough guy but I did the job and proved a lot of things.” added the new European champion.