Haye: “Fighting a big heavyweight like ‘The Cobra’ has really got my juices flowing.” 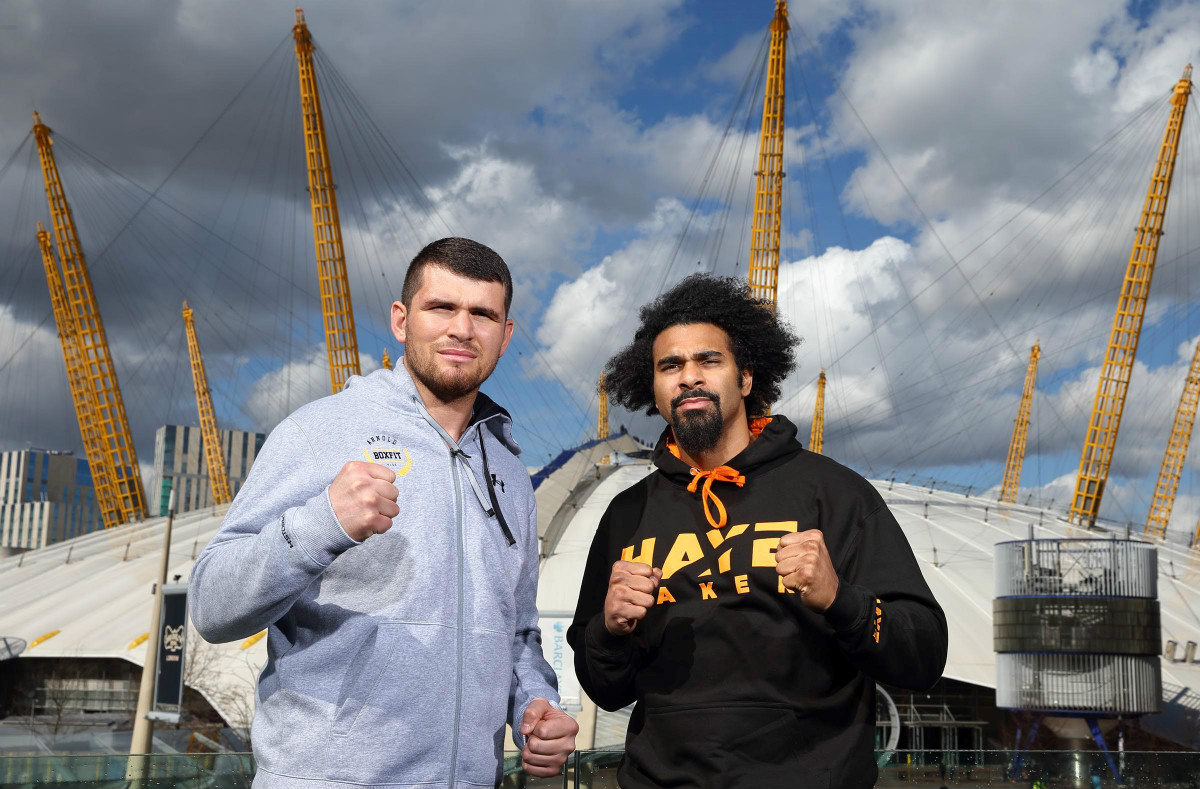 Former two-weight world champion David Haye today announced that he will face undefeated Arnold ‘The Cobra’ Gjergjaj on Saturday May 21 at The O2 in London as he continues his journey back to the summit the heavyweight division.

The Hayemaker returns to the ring for the first time since January 16 when more than 16,000 spectators packed into The O2 to witness him deliver a signature right hand to KO top 10 WBA ranked Mark de Mori. The fight lasted just 121 seconds in what was Haye’s eighth first round KO of his professional career and 25th knockout in his 27 professional wins.

Haye now turns his attentions to the 31 year old Kosovo-Albanian who has amassed an impressive record of 29-0, with 21 of those wins coming via knockout. ‘The Cobra’ stands at 6 foot 5 inches tall and most recently tipped the scales at 112 kilograms – his size and strength are expected to pose a real threat.

The Cobra’s 29-0 resume is the second longest winning streak in the heavyweight boxing behind only the current WBC champion Deontay Wilder, who is yet to be beaten in his 36 professional fights, but ahead of Tyson Fury who has 25-0 record. The Cobra has impressive pedigree having sparred with the current WBA and WBO heavyweight champion and, the man he beat for those titles, Wladimir Klitschko.

Commenting on the fight, Haye said: “I’m so happy to be back in the ring so soon. I said I wanted to fight regularly and that’s exactly what I’m doing. Every two to three months I want to be knocking somebody out and working my way back into title contention. Fighting a big heavyweight like ‘The Cobra’ has really got my juices flowing, taking a unbeaten fighters ‘0’ from him always makes the victory that much sweeter. Expect another explosive knock out!”

He continues: “The reaction to the first Haye Day event was incredible with a sell-out crowd at The O2, music acts, A-List guests like Idris Elba and Benedict Cumberbatch, and let’s not forget breaking TV viewing records with a 3.2m peak audience on Dave. May’s Haye Day will be even bigger and better. We’ve listened to fans and have a stronger undercard and even bigger musical acts to provide plenty of entertainment before my ring walk.”

Speaking about the announcement, The Cobra said: “This is obviously the biggest fight of my life and it is an opportunity I will not waste. Fighting in a huge arena against a former world heavyweight champion is massive motivation for me and gives me a chance to prove my skills to the boxing world. I respect ‘The Hayemaker’ – he was a very good fighter 5 years ago – but his time is over and I’m coming to win. I’m warning David Haye that he should not underestimate me – I’m unbeaten and I intend to stay that way.”

In addition to the announcement of the main event, Hayemaker Promotions today confirmed that Sheikh Fahad Bin Khalid Al Thani, a member of the ruling family of Qatar and the country’s first ever professional boxer, will make his debut on the undercard at The O2. Al Thani, who fights at super lightweight, has solid amateur pedigree having fought over 40 times and represented the Qatar National Team in tournaments around Europe and the Middle East. An opponent is yet to be confirmed.

Commenting on the news, Sheikh Fahad Bin Khalid Al Thani said: “I would like to thank David Haye and everyone at Team Hayemaker for giving me this great opportunity to fight in front of a packed crowd at The O2. I’ve followed David for many years now and I’m a great fan of his inside and outside of the ring. I’m very proud to represent my great and beautiful country of Qatar, my people and most of all my family. I’ve made history by being the first Qatari pro boxer, but my plan is to win titles.”

He adds: “I would like to thank my boxing coach Ismael Antonio Salas, who has been my confident and backbone in teaching me the best boxing that I can ever be taught and pushing me to become a future champion that I have always dream of being. I am dedicating this fight to the Emir of Qatar His Royal Highness Sheikh Tamim Bin Hamed Al Thani. Finally, I would like to thank my manager Frank Joseph and my whole team for believing in me and most of all I would like to praise and give all glory to God.”

Tickets to Haye Day at The O2 on May 21 are available on general sale now via www.theo2.co.uk