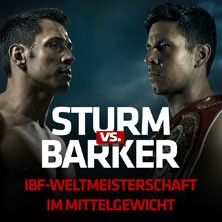 Dazzling Darren Barker has warned Felix Sturm that he’ll retain his title in style on the German’s home patch when he defends his IBF middleweight belt at the Porsche Arena in Stuttgart on December 7, live on Sky Sports.

It’s Barker’s third world title fight on foreign soil having won the belt in Atlantic City against Geale in August, the same city he took on Sergio Martinez in October 2011. The 31 year old says he’s relishing the chance to box in a big show in Germany, and that it’s Sturm that will be under pressure in a pivotal fight for the German.

“I have worked so hard to win the title and there’s no way I’m letting it go now,” said Barker.

“Tony (Sims, trainer) and I have a game plan in mind and plenty of weeks to work on it day in, day out in the gym, so I am very confident I’ll retain my title and do so in style.

“Felix is a quality boxer and was a great champion, and a massive star in Germany. He’s beaten some excellent fighters and had a couple of great fights with my Brit rivals Matthew Macklin and Martin Murray, but I truly believe I’ve got his number. It’s a great first defence for me because he’s a huge name but one that I really believe I have the beating of and I’m sure it’s going to be a great occasion.”

“Felix’s shows are always spectacular and I’m sure it will be a sell-out and the pressure will all be on him,” said Barker. “I’ve boxed all over the world as an amateur, in some pretty hostile places, and it’s never bothered me – it inspires me. I don’t worry about the judges; I plan on winning very well, and putting on a fantastic night with lots of my fans coming over for a great fight between two great champions.

“I have had a chance to walk around the arena and it is fantastic, it is going to be a great atmosphere and we are going to take a few out there. If 500 go they will sound like 2,000.

“People asked me ‘what are you going to Germany for? You’re mad, you’re mad’ but it was if somebody had said here is the winning lottery ticket, do you want to buy it for a quid? It was a no-brainer, the deal was so good. Aside from that I am extremely confident of winning. I respect Felix as a former champion, a great fighter with tons of experience, but he hasn’t experienced Darren Barker yet.

“The confidence that comes from winning a title is massive. I am looking forward to the fight. Training is going well and is only going to get better and I can 100 per cent guarantee I will be leaving Germany still champion. I am the proud owner of that belt and I look forward to a long reign as World Middleweight champion.”

Sturm is out to make history by becoming Germany’s first four-time World champion, and the 34 year old is confident of taking the title from Barker.

“I have very, very good memories of England,” said Sturm. “I won my first big trophy as an amateur in 1996 here. It has always been my goal to fight the best fighters at Middleweight and Darren Barker is World champion and is one of the top fighters at Middleweight. He showed a great, great fight against Geale and showed his heart, especially in round six. It was an incredible fight and it was really, really impressive.

“I can be the first German four-time World champion and build up my own legacy to be one of the greatest champions ever. I believe in the fight against Darren Barker I can show that I am one of the best because Darren Barker is also a great fighter.”