Groves vs Smith – British Super Middleweight Tale of the Tape 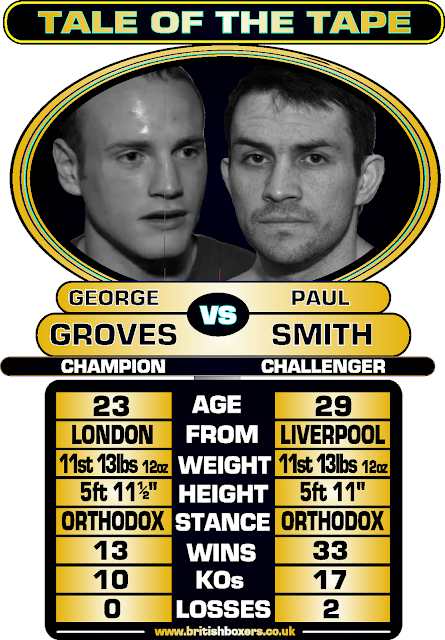 George Groves defeated James DeGale, prior DeGale had beaten Paul Smith. Now Groves faces Smith on Saturday night in defence of his British and Commonwealth belts and going off results and previous, Groves wins this one too doesn’t he?

Well that isn’t how it works, the old saying in boxing is that ‘styles make fights’ and common opponents and results don’t always go in sequence in boxing or other sports for that matter and Groves will face a whole different set of circumstances to overcome at Wembley Arena against the tough experienced Smith from Liverpool.

In outpointing DeGale in May, Groves took the Lonsdale belt off his rival, that DeGale in-turn had ripped from former champion Smith in December last year, via a 9th round TKO. This will be Groves’ first defence of that belt and the third of his Commonwealth strap.

I see Paul has got himself into great shape and I’m
looking forward to a good test tomorrow night, but I will keep hold of
my belts.” – George Groves.

Unbeaten Groves 23, has still only had 13 professional fights to date, despite his prominent rise to fame and title credentials domestically. The Londoner turned over professional in November 2008 after a successful amateur career and signed on under the Hayemaker Promotional banner and is currently trained by Adam Booth.

The Saint recently signed with promoter Frank Warren who also works with DeGale and such was the controversy before and after the fight and the history between the Cockney boxers from youth, another meeting will happen along the way one way or another. Groves also beat DeGale in the amateurs and although he knows they will again meet down the line, DeGale is the last thing on his mind at the moment and he is well aware of the threat posed by Smith.

“I see Paul has got himself into great shape and I’m looking forward to a good test tomorrow night, but I will keep hold of my belts.” said Groves.

“He will try and rush me. He will think he can come into the ring and try to boss it and out muscle me. He will try to get me to walk onto a big shot. He will be shocked, I have the greater strength.

Groves had wanted to meet Smith last year but the British champion opted to face DeGale instead, the ‘Saint’ believes Smith is taking this fight in a bid to make people forget about his British title loss last December.

All the talking is done and I’ve got to do the business and win back my British title.” – Paul Smith

“He obviously wants the fight to try and make people forget about his loss to DeGale. He is a good fighter and will ask questions. I wanted to defend this title and Smith was the right move.

“In his last few fights he has just had to face what has been put in front of him but I don’t think a couple of first round knockouts would have served him too well going into this. I don’t think I will have too much to worry about.

When questioned whether he will be going into the fight with knowledge of DeGale having defeated  the Liverpool fighter in nine rounds, Groves told how he will remain professional and box his own fight,

“It would obviously be nice to get an early knockout and especially before the ninth but I won’t go into this fight thinking that way. I won’t go into it trying to get it finished early, I will just fight my own fight. I am not one to pick a round or anything like that.”

Groves has often spoke of his ambition to be a world champion and thinks a victory at Wembley at the start of next month will be another stepping stone,

“A victory against Smith would be another step in the right direction in my career. He has been around a long time and is an established pro. It will be another scalp to add to my C.V. Whether a world title opportunity will come after this is uncertain but I would like that and I believe I will be ready for that next year.” Groves added.


Smith 29, is by far the more experienced of the pair, with 33 fights under his belt and just two defeats in an 8 year career. He featured in the popular American TV series ‘The Contender’ in 2007, which gave him worldwide recognition. In October 2009 he claimed the British super-middleweight crown against fellow Scouser Tony Quigley, defended it once against another Liverpudlian Tony Dodson, before losing it to DeGale in his second defence.

After that defeat to DeGale, ‘Smigga’ decided to leave his Liverpool boxing home and long time trainers George and Danny Vaughan to join Joe Gallagher in Manchester. The new plan for Smith was to step down to middleweight and they set out on a mission to seek a domestic title shot at the lower weight. Smith has had 2 fights this year since the loss to DeGale and both were first round knockouts over Jozsef Matolcsi and Paul Samuels respectively.

Smith has prospered under Gallagher’s teachings and a new fitness regime and has looked slimline and very purposeful in the gym and in his last two outings. It looks like Gallagher is really bringing the best out of him and the move and change has inspired him for another assault on boxing. Despite Smith’s plans to box at middleweight, he spotted a gap in the market and called out Groves to face him. The fight was offered to him by Frank Warren for his old title and the camp and they jumped at the chance.

Smith will be a very different animal to the one who faced DeGale eleven months ago, Gallagher seems to have added an urgency and aggression to his seasoned boxing skills and together with his new found vigour for the game Smith has every chance in this fight. He is in tremendous condition for this fight and ready to go to Groves backyard to claim his old title back from the new champion and odds on favorite.

“I want my title back. Regardless of the venue or where it is shown. said Smith.

“I wouldn’t care if this fight was behind closed doors. I am just aiming to win this, nothing else is on my mind.

“I said after the Paul Samuel fight that ‘styles win fights’ and I know I have the style to beat him. He leaves himself open. I feel he is an overrated fighter who had a one-off performance against DeGale,”

“DeGale is an awkward fighter to face. When you get in the ring he surprises you with the shots he throws. For Groves he had the advantage having sparred with him in the past, there was no shock factor. His win against DeGale does not give me any nightmares.”

A victory for Smith could set up a rematch with newly-crowned European champion DeGale but Smith would not be drawn on the prospective fight, “I am not thinking about that at all. At the moment everyone is writing me off and Groves is the one going on to a rematch. My focus is just to spoil his plans. He can talk about DeGale but all I want is my title back.”

Smith believes he now goes into this fight in the shape of his life, “I am going that extra mile but I always do. I have never been as fit as I am now. I feel I have a new lease of life going into this fight.”

Smith also believes he can stop Groves but has prepared himself to go the distance in his quest to win both British and Commonwealth belts, “Without doubt I can prevent this going the distance. We will have to see on the night, I have prepared for a very brutal 12 rounds.

“All the talking is done and I’ve got to do the business and win back my British title.” added Smith.

What makes this fight interesting is that the neutral coudlnt really say with certainty which way it will go. Yes Groves boxed very well against DeGale, where as Smith was flat and eventually succumbed to him and was stopped. DeGale and Groves are at the same early stage of there careers and the close nature of the contest proved there isn’t much between them in all departments.

You could by now call Smith a seasoned campaigner but really despite nearly three times as many fights as Groves he doesn’t have loads of miles on the clock and under Gallagher will go in with a water tight master plan that both fighter and trainer will have gone over detail by detail. Gallagher is a boxing obsessive and all his fighters are educated on their opponents in the back room of the gym with a dossier of DVD’s – Make no doubt about it, Paul Smith will be ready.

Equally Groves is guided by a tactician and scholar of the game in Booth, who plans his boxers stratergy around his and his opponents strengths and weaknesses. Groves completely changed his usual style to outbox DeGale and use plenty of movement and angles to claim the momentous victory.

The result I believe will come down to who settles into thier chosen tactic first and who can adapt to a plan B, when the fight and both boxers hit the wall around the middway stage. Who pushes that bit extra in the final rounds of a close hard fought 12 round battle will have their hand raised. If that is to be Groves, then Smith will feel hard done by and should the judges favor Smith then vice versa.