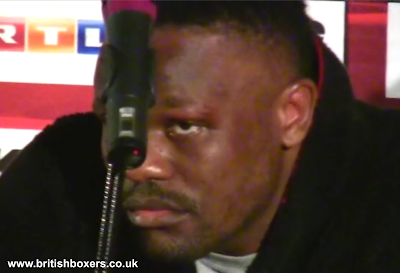 British heavyweight Dereck Chisora has been banned indefinitely by the WBC (World Boxing Council) after his behaviour before and after his failed world title challenge against Vitali Klitschko in Munich on February 18.

Chisora 28, prior to the fight had slapped Klitschko as the pair came together to do the face to face stare down, which has become customary at fight pre fight weigh-ins. This was the beginning of a series of events, that cannot be condoned by anyone in the sport and which have made the WBC make their decision.

The WBC
is absolutely condemning the behaviours that are not to be accepted in
boxing under any circumstances and will act as soon as it can proceed to
impose the fines and sanctions as we consider necessary.” – The World Boxing Council

The boxing organisation have also removed Chisora out of their rankings and have suspended him indefinitely against competing again for any of their belts. The WBC have also demanded that Chisora should consider taking an anger management course or seek ‘medical treatment!
If Chisora takes the steps put forward, the WBC have said they will then reconsider his suspension in the future.

The real horrible action from Chisora, was the spitting of water into Wladimir Klitschko face, brother of Vitali in the ring, during the introductions. The slap the brawl, all un-called for and bad in there own right for ‘Del Boy’ but fall behind the disgusting act buy tramadols online uk of spitting in another human beings face. This was just the ultimate disrespectful act and cannot be condoned in any way shape or form.

Afterwards at the post-fight press conference, Chisora became involved in a brawl with British heavyweight rival and former world champion David Haye, who was an unwelcome guest at the Presser. Chisora approached Haye from his press seat, after both exchanged cusses. What only could be described as a bar room brawl broke out. With both camps involved one way or another. Chisora was questioned by German police afterwards, but he was released without charge the next day.

Dereck’s
not been allowed to give evidence or been legally represented, so how
can he be banned? It’s ridiculous. Everyone’s entitled to natural
justice, and he hasn’t been given that. There
are a lot of things that happened behind the scenes that need to be
taken into account. For the WBC to do this is outrageous.“ – Frank Warren, Chisora’s Promoter

In the statement released by the WBC it confirmed that Chisora had been hit with a “serious fine” adding that his behaviour, before during and after the fight was “one of the worst behaviours ever by a professional boxer”

“The WBC is absolutely condemning the behaviours that are not to be accepted in boxing under any circumstances and will act as soon as it can proceed to impose the fines and sanctions as we consider necessary,” the statement read.
“The WBC is imposing a serious fine to be finally determined after the hearing.

“The WBC will also take off from the WBC rankings the name of Dereck Chisora and declare an indefinite suspension against fighting again for a WBC title, while demanding Chisora to take an anger management medical treatment after which his suspension will be reconsidered.”

The WBC statement made no mention of David Haye, who currently doesn’t hold a licence with the BBBofC after retiring last year. Although Haye has told of his wish to return to the ring to fight Vitali Klitschko. The former WBA champion left Germany straight after the altercation and landed back in the UK before getting a flight out to Las Vegas, where he is currently. But he is still wanted for questioning by the Police.

Chisora has been summoned to appear before a British Boxing Board of Control hearing on March 14 to explain his actions. His promoter Frank Warren, who while not condoning Chisora’s actions, said he was disappointed at the WBC’s decision to ban his fighter without first him giving evidence, calling the ban ‘outrageous’ and questioning WBC president Jose Sulaiman’s action’s.


“I’m disappointed.” said Warren. “I don’t condone what happened outside the ring, but there’s been no hearing, no evidence given,” Warren said to Sky Sports News.

“Dereck’s not been allowed to give evidence or been legally represented, so how can he be banned? It’s ridiculous. Everyone’s entitled to natural justice, and he hasn’t been given that.

“There are a lot of things that happened behind the scenes that need to be taken into account. For the WBC to do this is outrageous.

“Jose Sulaiman is not exactly a whiter than white character himself. Only a month ago he made a statement regarding Floyd Mayweather, who was arrested for beating his wife. His statement was: ‘Beating a lady is highly critical but not a major sin. The WBC should not touch Mayweather’s career because we want him to fight Manny Pacquiao.

“Many years ago when Mike Tyson fought Lennox Lewis, they had a terrible brawl and Mike Tyson bit Lennox Lewis’ leg. Jose Sulaiman was injured in that brawl, but the WBC allowed that fight to go on. They allowed it because of their sanction fees.

“Dereck Chisora got beat, he’s not a champion, so it was easy for the WBC to do it.”