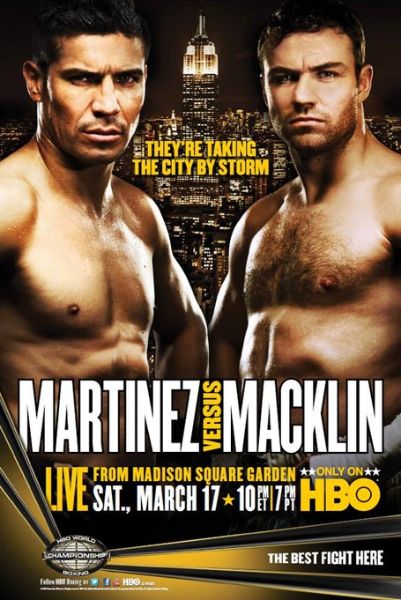 But when these two meet at The Theater in Madison Square Garden, on St Patrick’s Day, March 17 – Macklin has vowed to go to war with the WBC Diamond champion in his quest to rule the world middleweight division.

Both are excited to be fighting at the Garden, Like Macklin, It will also be for Martinez (48-2-2, 27 KO) – the No1 middleweight in the world, his first appearance at the famous venue, which as been graced by the very best of ring craftsmen.
For Birmingham born Macklin, who is of Irish decent, representing the green of  his ancestry as passionately and patriotically, as he does his English homeland, It will be the biggest fight of his life.
Adding to the big fight flavor also, is the fact it is being held on Ireland’s Patron Saints day. ~ New York will be a sea of Green, as the many Irish fans will make the trip over to the Big Apple, to join their Irish American counterparts, and fight fans, who will turn out in their thousands to cheer on Macklin, on their most special of days, at the home of boxing.
“There is going to be a lot of people coming from Ireland for this fight. The fact that it’s in New York at Madison Square Garden on St. Patricks Day it’s the biggest fight for an Irish boxer.” said Macklin.
“I’m really confident about the fight, not just because of Sergio, but where I am myself.” added a confident Macklin. (28-3, 19 KO)

‘Mack the Knife’ is in a good place you feel at the moment. After proving against Felix Sturm in June last year, that he can mix it at world level. Macklin now realises he has a good and realistic chance of beating anyone on his day. – In his last fight against the German Sturm in Germany, Macklin pushed the WBA champion all the way to a split decision and in many peoples eyes did enough to win that fight and it seems Macklin almost feels like the champion in waiting. (See Our Exclusive Interview with Macklin below in his first day back in the gym training since the Sturm loss.)

I’ve got to impose my style upon him, so I want to make it a physical fight, a grueling tough hard fight. – Basically I want to go to War.” – Matthew Macklin

The 29-year-old has not boxed since losing to Sturm and this timely fight with Martinez can be seen as his  reward or compensation for his apparent injustice in Germany and he is determined to use the experience to his benefit and take it all out on Martinez in a match up that will make his dreams come true and banish the nightmares he must still have, when they raised Sturm’s hand, after his gallant effort.
Macklin’s first day back in the gym and Interview after Sturm fight
“I was very disappointed not to get the decision against Sturm but this is the silver lining. explained Macklin. “Everyone in America saw that and they were way more outraged than we were in England or Ireland.
“Maybe because they love the aggression side of boxing, which I showed. Most people in America barely had Sturm even winning three rounds.
“Everyone thought I won it but in America they felt I really dominated him completely.” he said. – Macklin who speaks and understands German told us that, when he listened to the TV and read the German papers, even most of the German press had him winning. But his loss there, was his ultimate gain in the United States, where he now lives and trains full time as he seeks the glory of boxing’s highest tier.
Now promoted by Lou DiBella, in New York, Macklin returned to past trainer Buddy McGirt in the City, after being trained in the UK for his last few fights by Manchester coach Joe Gallagher, and prior to that Billy ‘The Preacher’ Graham, the man who guided Ricky Hatton to his finest hours.
Macklin explains why he has hired former world champion and now respected trainer McGirt. “I thought Buddy was a good trainer back in 2008 but I was in lesser fights, like 10-round fights, so with the travelling and logistics it wasn’t practical.

“Now, however, I’m at this stage and I’ve relocated to New York, signed with Lou and it makes more sense. It was good to get rewarded with this fight because being at against Martinez, it ticks all the boxes, It’s like a fairy-tale.”

To win the fight, Macklin believes he must do what he did against Sturm and take this fight into the trenches and declared War! on Martinez – Macklin’s aggression, toughness and come forward style, with that of the speedy and slick counter punching of Martinez, will undoubtedly make for a terrific fight.
“I’m really confident about the fight, not just because of Sergio, but where I am myself,” said Macklin.

“Could he make 154(lbs) still? Probably!  Could I? No way! – So I do feel I’m a little bit bigger naturally, probably more physically stronger, he’s probably quicker with better reflexes that sort of thing. So if I stand back and let it be a boxing match and a speed contest, I’m gonna come off second best.

“I’ve got to impose my style upon him, so I want to make it a physical fight, a grueling tough hard fight. – Basically I want to go to War.” Macklin added.

Southpaw Argentinian hero Martinez himself like Macklin has harbored the ambition to fight at boxing’s most famous venue all his career. And for him, St. Patrick’s night will be as special for him as it will be for Macklin, when he too will realise a dream to fight at The Mecca of boxing. and the champion says; he is primed and ready for whatever his British challenger comes with.

“It’s been a dream of mine, to fight at Madison Square Garden.” said Martinez.
“My entire life, like any other boxer, I’ve imagined and dreamed of fighting at Madison Square Garden.
“It’s going to be a battle of fighting styles, for my taste I like opponents like that. I’m always doing something new, for my fight with Macklin, I hope it’s not something too hard, but if it is, then I’m ready for it.” added the champion.
Whatever the 17th March 2012 clash holds for them, both boxers agree; that this will be the most important fight of their lives.